Home » Volleyball looks to take next step this season

Volleyball looks to take next step this season 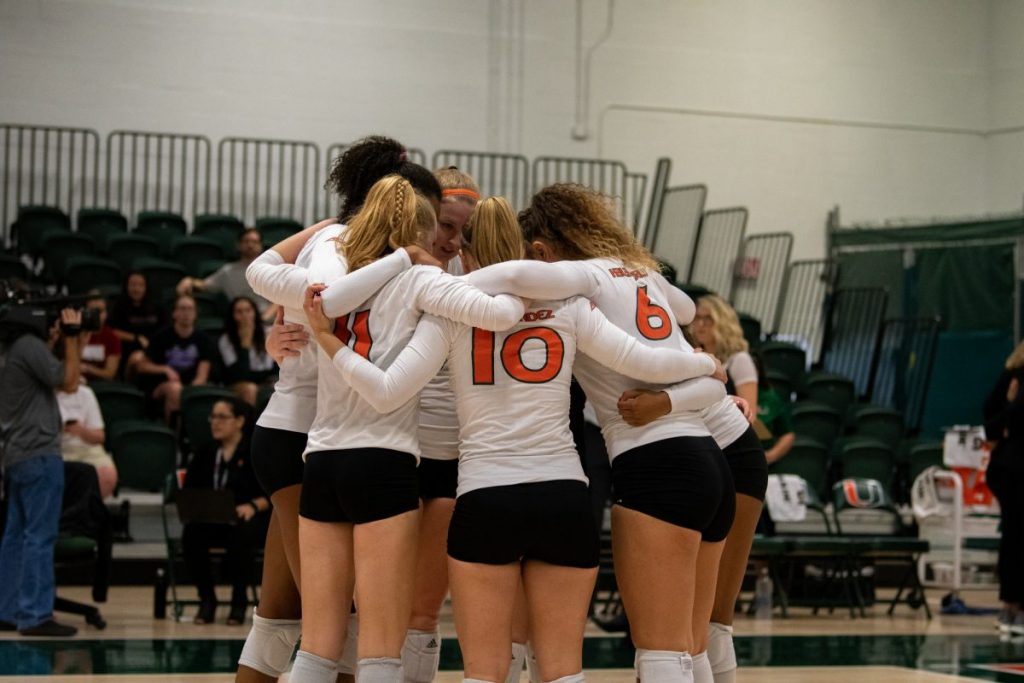 2019 was a growing year for the Miami Hurricanes. Welcoming seven freshmen into the program and inserting three of them into the starting lineup, the season did have a bit of a rebuilding feel to it. With a full but unstable offseason now in the rearview mirror, the University of Miami women’s volleyball team will take the 2020 season one game at a time throughout the pandemic-shortened fall.

The ‘Canes will return their entire starting lineup from a season ago when they finished with a 10-16 overall record and a 6-12 Atlantic Coast Conference mark. The 2020 roster will be youthful, with only two seniors listed. Still, Miami and head coach Jose ‘Keno’ Gandara will look to build consistency in a short calendar year.

“With so much uncertainty in recent months, having something concrete on the calendar to look forward to is refreshing,” Gandara said in a press release this month. “We understand what a blessing it is to be competing this fall, and we’re thankful for the trust the conference and administrations have placed in us to do this as safely as possible.”

While the Canes remain young, they’ll be reliant on fewer first year players. Sophomores Savannah Vach, Amanda Falck, Kennedy Prince and Janice Leao were all instrumental as freshmen in 2019 and will look to come back stronger this year.

Vach, a setter, was a crucial part of the UM attack and responsible for a team-high 1,027 sets, a whopping 87 percent of the team total. The ACC All-Freshman team selectee from a year ago finished fourth on the team in blocks with 44 and fifth in digs with 174. Defensive specialist Falck, meanwhile, led Miami in digs with 312 while middle blocker Leao led in total blocks with 84. Outside hitter Prince rounded out the class as arguably the most versatile of the bunch, recording 302 kills, 24 services aces, 193 digs and 23 total blocks, all figures that stood in the top five of each statistic.

The junior class will be spearheaded by libero Emily Damon and defensive specialist Priscilla Hernandez. The two will look to improve from a 2019 campaign where they logged 172 and 206 digs, respectively.

Seniors Janet Kalaniuvalu and Elizaveta Lukianova are both outside hitters that can act as offensive sparks. They will fill key leadership roles for UM in 2020. Lukianova was the only Cane named to the preseason All-ACC team after a 2019 season where she was responsible for 302 kills and 71 total blocks. Kalaniuvalu comes into the season after leading Miami in both kills (312) and aces (32) last fall.

2020 is anything but normal, and the volleyball schedule reflects that. Instead of a normal slate of non-conference and conference games, ACC teams will play a total of eight games this fall in regional pods and two-game weekend series.

UM’s matches will be against Georgia Tech, Wake Forest, Clemson and Florida State, with the matchups against the Yellow Jackets and Seminoles on the Coral Gables campus’ Knight Complex without fans present. The one-month-long season will commence on Sept. 24 and wrap up for Miami on Oct. 16, with no conference or NCAA tournament scheduled this fall.

Like other NCAA-sanctioned fall sports, no student-athlete will lose a season of eligibility competing in the abbreviated 2020 season.

Miami in the NFL: Week 2
The Miami experience in 49 minutes