Home » ‘Cuties’: The line between commentary and indulgence

‘Cuties’: The line between commentary and indulgence

When #netflixisover began trending on Twitter, it was impossible to miss the conversation surrounding French director Maïmouna Doucouré’s “Cuties.”Those allured by the constant cycle of rapid-fire controversy often found on the platform were instantly met with a bright blue poster with a simple title and Netflix’s logo stamped proudly beneath.

It could pass for an advertisement of a new season of “Dance Moms” at first glance if it weren’t for the four girls in tight, shimmering spandex posing seductively beneath spotlights. If the eye-catching visual wasn’t enough to raise a few brows, the caption beneath the movie’s title was arguably worse: “Amy, 11, becomes fascinated with a twerking dance crew. Hoping to join them, she starts to explore her femininity, defying her family’s traditions.”

Immediately, outrage erupted across the platform.

Many decried Netflix’s flamboyant sexualization of children. Others called into question Doucouré’s motives behind her vision of addressing the hypersexualization of young girls in the modern age. While critics have rated it a high score of 89 percent on Rotten Tomatoes, audiences have given it an abysmal score of 11 percent.

In a way, the backlash from Netflix’s choice of advertisement seemed to be a self-fulfilling prophecy. An artist’s work being warped to represent the very thing it is critiquing is a very romantic irony that makes for a good headline. However, it is difficult watching the movie while bearing the weight of the criticism and outrage it has already accumulated.

“Cuties” is primarily driven from the perspective of Amy (played by Fathia Youssouf), a young Senegalese-Muslim girl who lives in Paris with her mother and younger brothers. As she grows bored with her culture’s expectations of womanhood, Amy becomes transfixed by the rowdy behavior of the Cuties – a local dance group in her middle school – while searching for an escape from the shadow of her polygamous father’s new marriage and her mother’s resulting misery.

Despite the abusive, clique-driven behavior she endures throughout the film by the Cuties, Amy continuously lingers around to find that feeling of belonging. ‘Fascination’ turns into a dark fixation. ‘Free-spirited’ translates into crass, vicious eleven-year-olds whose affections turn on a dime as soon as someone within the group dissents.

Amy spends half of the movie waiting in the bleachers until she’s given the chance to take the place of an ousted member. As soon as she’s officially inducted, her personality takes on those of the girls around her. At the peak of her social standing in the clique, she dresses more maturely than any of the others in showy crop-tops, tights and heels.

Is there rebellion? Certainly. One of the common themes within the film is the pursuit of identity. During pivotal parts of the movie, Amy aggressively fights against the pull of the traditional party dress hanging in her closet, almost always retaliating by escalating her behavior.

What starts with genuine curiosity into the world of shameless flaunting turns into a destructive spiral of confusion, anger and recklessness. She begins neglecting her family in favor of the thrill of attention she gets from her outrageous behavior. She completely disregards bonding habits with her younger brother, brushing him off dismissively with her eyes glued to the phone she’d stolen. Her mother collapses from stress during a dinner scene, and Amy watched with cold disregard before returning to her meal.

Amy’s spiral into self-obsessed delusion comes to a head once her worlds start colliding. The phone she’d stolen from a family member gets discovered. Her reputation is soiled by humiliation at school. Towards the end of the movie, the ties between her family and the Cuties get muddied as Amy desperately tries to cling to whatever she can to stay afloat.

She loses the respect of those around her when her mistakes pile together, and, when the dance troupe confronts her with deflated apathy, she violently lashes at them to retain the one thing she’d lost herself in at the cost of her life at home.

If there’s one feeling the movie seems to embody with unabashed rawness, it’s the experiences of someone trying to dip their toe into an adult world and the consequences that come out of it. 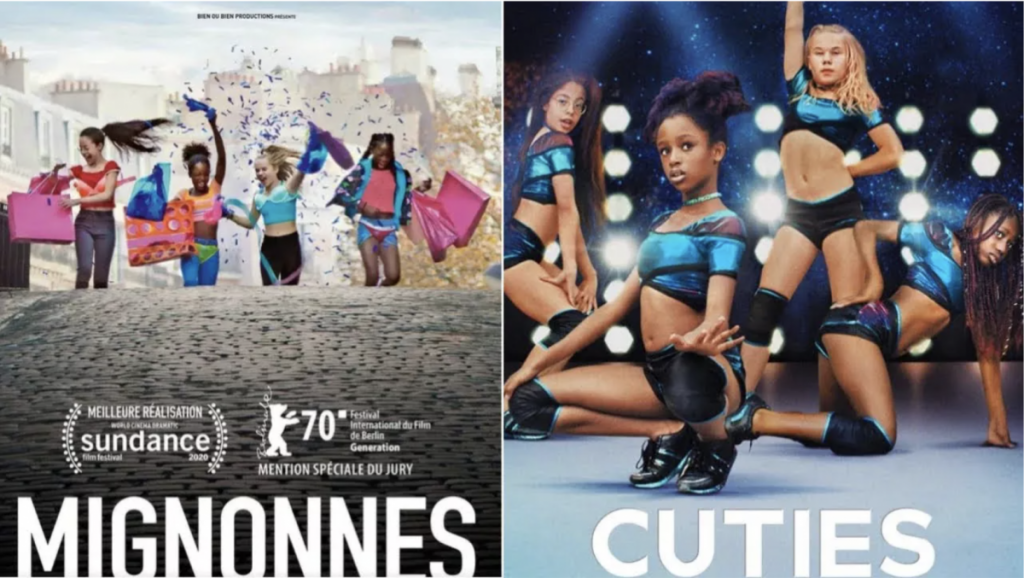 A young girl physically fighting to take back a phone she’s trying to hide away is a visceral moment, and her panic is colored in the recognizable shame and fear of a child who knows what they’re doing is wrong. The fury from Amy’s mother after an aggressive episode at school will resonate intensely with anyone who has experienced having a secret social media account uncovered.

Despite the nuance of navigating adolescent curiosity, there also were scenes in the film that were physically difficult to watch. Dance montages seemed to carry on longer than necessary. The main character stabs a bully’s hand with a pen with swift apathy. An exorcism involves silent, carnal motion with a layer of breathing beneath.

At one point, Amy starts to undress to scare her cousin into giving her the phone back. Several of these moments bordered the line of uncomfortable exaggeration, and though there’s no doubt that the director purposefully meant to invoke feelings of discomfort towards sexualization and brutality, it almost becomes too uncomfortable.

Where scenes could have been cut for brevity—it’s easy to understand the film’s point without thirty seconds of sensual dancing—”Cuties” seems to aim for shocking visuals over quiet horror. Where this is most apparent is at the climax of the movie, when the Cuties perform in competition.

The choreography is difficult to stomach as it grows more intense, and both Amy and the audience feel overwhelmed and disjointed towards the end of their routine. On one hand, it’s an effective way to draw the viewer into Amy’s psyche, sickened and anxious over what she’s become involved in. On the other, it’s unnecessarily drawn-out footage of children gyrating and twerking. Discomfort is the intended emotion to be felt by the audience, but it feels like the film sacrifices that message by falling into the very trap it is trying to comment on.

Faced with the choice of attending her father’s wedding in her traditional dress or being a part of the Cuties in her skimpy dance uniform, Amy ultimately leaves behind the two doors of ‘adulthood’ she’s had to face throughout the movie, running out to play with the local children. With the abrupt curve she’d taken into the Cuties’ world, Amy’s reclamation of childhood feels intentionally incomplete.

She cannot return to naivety, but she’s permitted the effort of repairing what she’s done to her identity and self-esteem. It’s a hopeful ending for a dark movie, and despite the gut-wrenching journey, it feels cathartic to see her able to shed the suffocating ghost of hypersexuality and stringent religion, being allowed the forgiveness she’s looking for.

Both decriers and supporters of the movie share valid points with varying degrees of nuance. No, the movie was not made with pedophilic intent and was genuinely meant to comment on the hypersexualization of children. Yes, the way it was presented both by the original product and by Netflix undermines the message it’s trying to convey by hypersexualizing children.

There should not be a question of whether “Cuties” has received enough attention.

Using anger to push a product out in front of the general audience is a marketing tactic that is starting to burn out, but continues to thrive regardless. Time and time again, dragging something in front of a rabid audience with provocative marketing will see it simultaneously torn apart and critically dissected, and neither viewpoint is particularly wrong. They’re just products of provocatively engineered marketing strategies that have people intently discussing a movie that begs to be seen to be believed.

Like its ending, “Cuties” becomes the paradigm between lost innocence and the good intentions that try to peer out from the darkness. Even after Netflix’s amendment of the poster and caption, it still manages to miss the point and feel disingenuous to what the movie is.

“Eleven-year-old Amy starts to rebel against her conservative family’s traditions when she becomes fascinated with a free-spirited dance crew” trails towards the opposite end of the spectrum of purity. Where the original caption was salacious, the updated version feels too infantilizing for a movie that doesn’t seem to be either.