Home » Moving up: Hurricanes ranked No. 12 as FSU week begins

Moving up: Hurricanes ranked No. 12 as FSU week begins 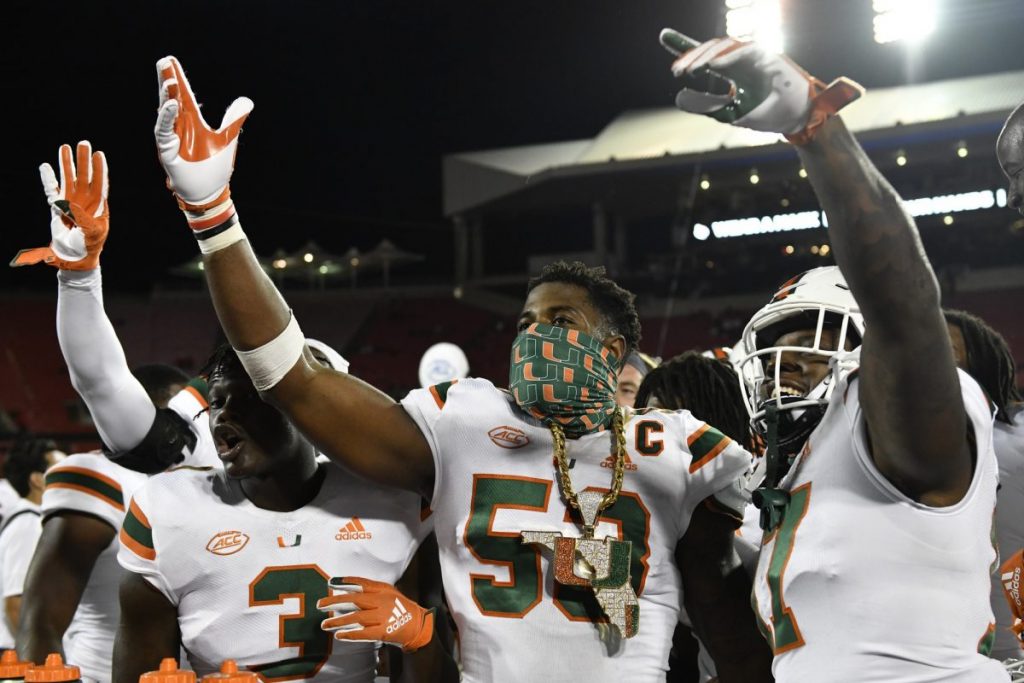 Linebacker Zach McCloud (53) celebrates with Turnover Chain 4.0 during the second half of Saturday's game against the Louisville Cardinals at Cardinal Stadium on Saturday, Sept 19. Photo credit: Jamie Rhodes/ACC

After a dominant 47-34 win over the ranked Louisville Cardinals at Cardinal Stadium, the Miami Hurricanes moved up five spots to No. 12 in the AP Top 25 poll.

Miami’s offense totaled 485 yards and the defense finished with 10 tackles for loss, three sacks and three turnovers in the win. This is the highest the Hurricanes have been ranked since 2018, when they were ranked No. 8 in the preseason poll. Louisville, meanwhile, moved down to No. 24 in the AP poll.

And, College GameDay is coming to Miami.

“To have GameDay be here…hey, it’s Miami vs. Florida State. It doesn’t matter what the record is,” Diaz said. “Everybody knows that’s a huge weekend, and our players understand what’s on the line when Florida State comes to town.

As a result of Miami’s win and new ranking, Hard Rock Stadium will be the site of ESPN’s College GameDay this Saturday when the Hurricanes take on in-state foe Florida State in the highly-anticipated rivalry game at 7:30 p.m. on ABC. And Hurricane players are excited at the opportunity to perform on a national stage against their long-time rival.

“Let’s rally the troops!” junior tight end Brevin Jordan said after yelling out in excitement when he found out GameDay is heading to Miami. “50 years from now, people are going to be asking, ‘Hey man, did you beat Florida State?’ I’m so excited.”

Florida State is 0-1 this season after losing 16-13 to Georgia Tech on Sept. 12 and will be without head coach Mike Norvell, who announced he tested positive for Covid-19 last week. Norvell will be replaced by deputy head coach Chris Thomsen.

Miami defeated Florida State 27-10 last season in Tallahassee and have won the past three games in the series between the two teams.

“As a Hurricane, when you come here, this is one of the biggest, if not the most important game of the season,” junior cornerback Al Blades Jr. said. “When you leave here, everyone is always going to ask you what was your record against Florida State.”

UM quarterback D’Eriq King will face Florida State for the first time in his career and despite the fact that he is new to the program, King understands how big of a deal this game is.

“It’s the game you must win in Miami. It’s a game that will follow you for your whole life, so it’s a big week for us,” King said.

Freshman Lavassas shines in first cross country meet of the season
‘For You Page’ to high fashion: TikTok trends that are taking over