Home » Soccer falls to 0-3 with loss to Notre Dame

Soccer falls to 0-3 with loss to Notre Dame 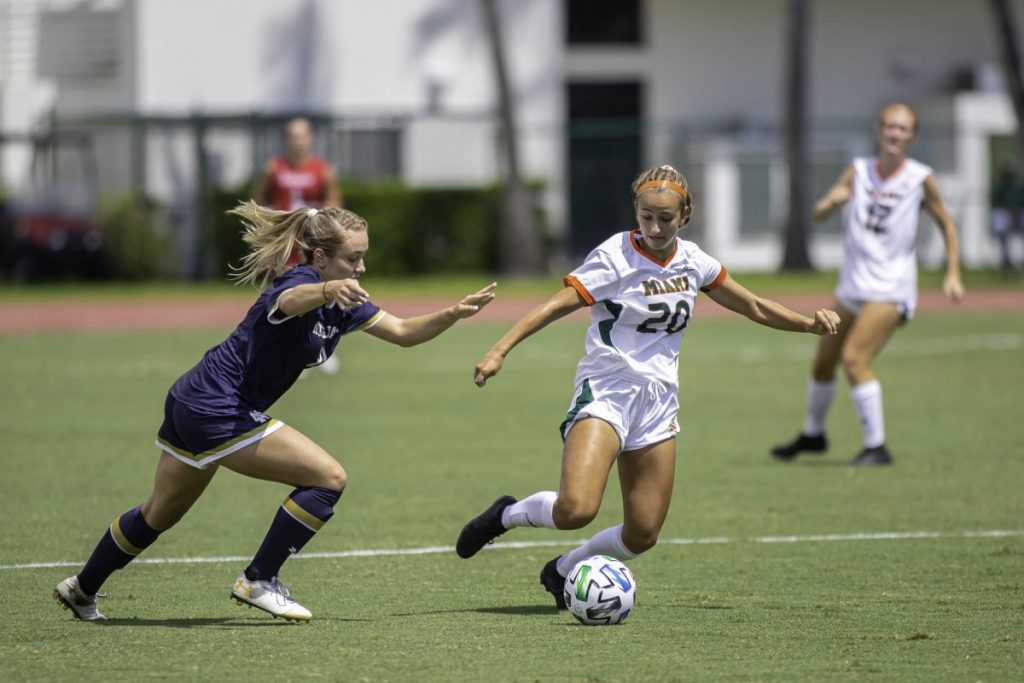 Freshman Michaela Baker fights to retain possession while bringing the ball up the field in Miami's 6-0 loss to Notre Dame at Cobb Stadium on Sunday, Sept. 20. Photo credit: Josh Halper

The Miami Hurricanes fell again in Atlantic Coast Conference action, dropping a 0-6 result against the Notre Dame Fighting Irish at Cobb Stadium Sunday afternoon in front of 40 friends and family members of players. Through three ACC games in 2020, UM has been outscored 0-12.

“We wanted to move them [Notre Dame] out of the space, and have a second and third option into the space,” head coach Sarah Barnes said on her team’s offensive gameplan. “We felt like we needed to clean up some of the small details…we did not.”

Statistically, Miami (0-3) struggled across the board in a match which was moved up from 1 p.m. to noon due to weather concerns. The Irish outshot the Canes 14-3 overall and 10-1 on shots on target. They also attempted 10 corners to UM’s five. The match was stopped due to lighting in the 81st minute but resumed after a delay.

Similarly to Thursday’s 3-0 loss to Louisville, UM allowed multiple goals early. And for the second time in a row against ND, a Fighting Irish player recorded a hat trick.

“We completely lost the battle in the box. I don’t think we did in the middle of the field but we did in the boxes and that’s where it matters,” said Barnes. “We can’t make an excuse that we have to learn and improve. That’s just a continued commitment to demanding more from ourselves.” 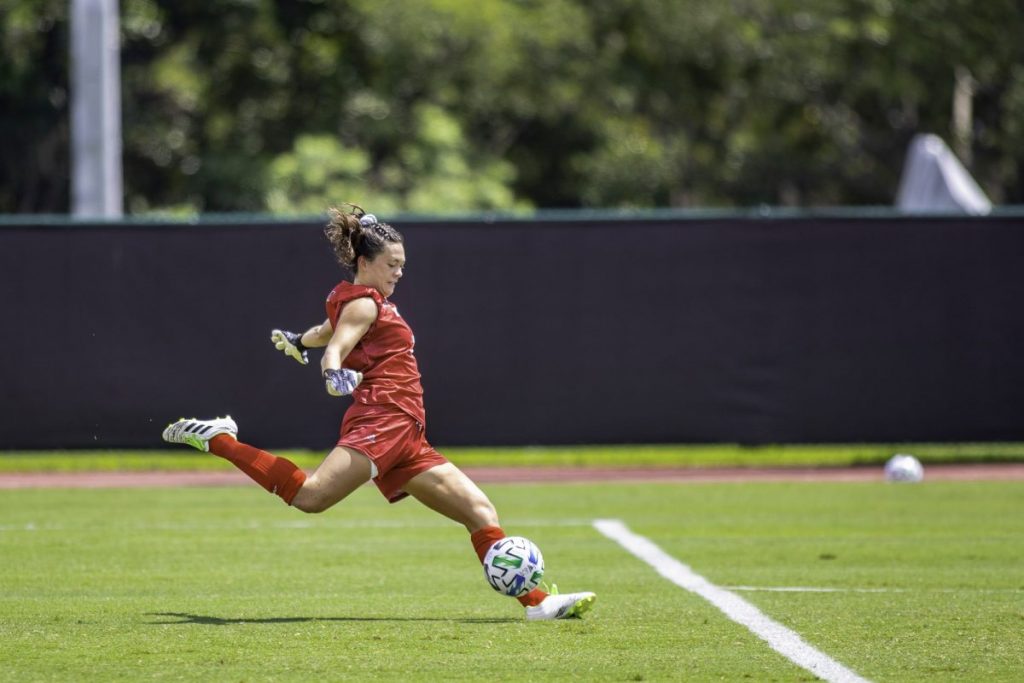 Junior Goalkeeper Typer Speaks winds up for a goal kick during the first half of Miami’s loss to Notre Dame on Sunday, Sept. 20 at Cobb Stadium. Photo credit: Josh Halper

The Irish opened scoring in the eighth minute after Selena Fortich was called for a handball in the 18-yard box. Sammi Fisher took the penalty to give Notre Dame a 1-0 lead after having three goals against the Canes in 2019.

“We didn’t recover that well. I think you could just see the body language, that there was a letdown,” said Barnes. “You can’t let that seep in.”

Miami conceded again in the 12th off a cross from Luisa Delgado to Olivia Wingate, who put the ball behind Canes’ Speaks with ease. Kiki Van Zanten made it 3-0 right before halftime in the 43rd after stealing the ball from UM defender Jackie Koerwitz in a one-on-one.

Delgado earned a second assist in the second half when she fed Fisher just outside the six-yard box for her second individual goal and the fourth for the Irish in the 51st minute. Van Zanten then scored with her second goal of the game in the 81st , right before the weather disruption.

And after coming back out, the sophomore forward wrapped up the scoring for Notre Dame with her third goal in the 87th .

UM’s loss comes a year after falling 3-0 in South Bend a season ago. The Canes last defeated the Irish in 2015, having lost their past three matches in the series before Sunday.

The Canes will now play four consecutive road games, with their next matchups being at Wake Forest on Oct. 1 and at Virginia on Oct. 4. They’ll then have a week to prepare for another pair of road matches at Virginia Tech and Pittsburgh. Miami will next be back at home to face Syracuse on Oct. 29 before hosting Duke on senior night on Nov. 1.