Home » Canes win, but plenty of room for improvement is apparent

Canes win, but plenty of room for improvement is apparent 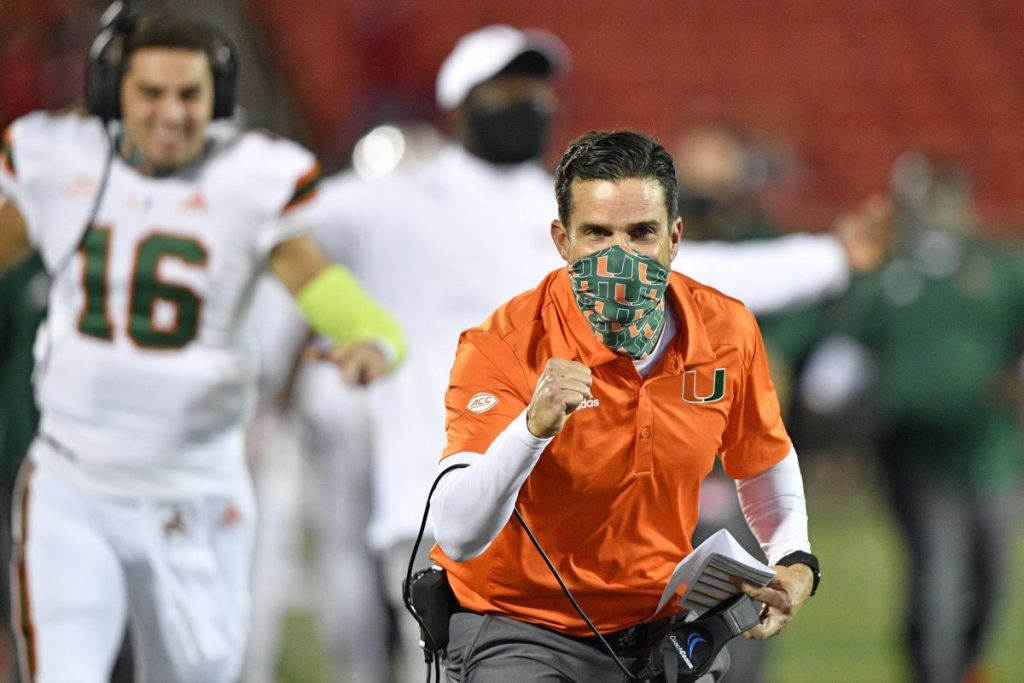 Head coach Manny Diaz reacts after a touchdown during the second half of play against the Louisville Cardinals at Cardinal Stadium in Louisville, Ky. on Saturday, Sept. 19. Miami defeated Louisville 47-34. Photo credit: Jamie Rhodes/ACC

The Miami Hurricanes scored early and often Saturday to defeat the Louisville Cardinals at Cardinal Stadium 47-34. The game was largely out of doubt by the end of the third quarter, but parts of the contest had fans feeling anxious and frustrated.

Miami (2-0, 1-0 ACC) was on its heels twice in the third quarter. A 14-point halftime lead was cut to seven twice in the period, keeping the Cardinals in the game and getting the 12,120 fans in the Bluegrass State on their feet.

UM swiftly responded with one-play, 75-yard touchdowns to retake their two-score lead. And then they did it again.

Both Cam’Ron Harris’ run and Jaylen Knighton’s wide-open catch were big swings that helped the Canes keep enough separation to pull away down the stretch. The game could’ve gone very differently without each of these plays.

“We’re playing good, complimentary ball,” said Diaz. “The one thing that this team has is that they’re pretty connected, they have each other’s back pretty good. We have really adopted that play the next play mentality so no matter what happens, we just go back out there and go right to work.”

The placekicker position was at best a mess for the Hurricanes in 2019, with former UM kicker Bubba Baxa missing half his attempts a season ago. Insert Jose Borregales. The transfer from FIU was one of the players of the game against Louisville, going 4-4 while making kicks from 48, 57, 22 and 40 yards.

“To have a guy that can be good from that range, that really helps us because those points really mattered at the end,” said Diaz.

The ability to consistently make kicks from distance is a trait that’s been missing from Miami’s roster for several years. Having a special teams security blanket was worth 12 points Saturday and may very well be a deciding factor in more games this season.

Fans have clamored for a spread offense and a signal caller that fits the scheme for a decade-plus. D’Eriq King is the answer, at least in 2020.

King completed 18 of his 30 passes for 325 yards and three scores. He wasn’t perfect, missing a few open receivers in key spots, including Mike Harley on the goal line in the third quarter.

“It’s still hard sometimes in game two of a season,” Diaz said. “You don’t really know if you’re going get the look you really want, but as it turned out, we did and we were able to really get them on some difficult things and some of those things are predicated on again [King’s] running ability. When you can create explosive plays and score without having to drive the ball down 10-12 plays, it makes life a lot easier,” Diaz said.

Still, King’s presence has clearly jump started the offense through the first two games. Him and coordinator Rhett Lashlee dictated the pace of play and were in control of the game, opening holes and opportunities for other perimeter weapons, including tight end Brevin Jordan, who had a career night, catching seven passes for 120 yards and a score. Him and other receivers were regularly wide open, allowing UM to light up the scoreboard.

The front seven continued to impress at Louisville, once again being a constant thorn in the side of an offense. UM compiled three sacks and 10 total tackles for loss, and when the Canes didn’t hit Cardinal quarterback Malik Cunningham, they affected his passes. Al Blades Jr. also had an interception late in the first half, giving the turnover chain its first appearance of 2020.

Still, Louisville had success moving the ball for swaths of the contest. UL gained a total of 516 yards and rushed for 4.3 yards per attempt. Cunningham threw for 307 yards while going 26-36 and had UM’s defense on its heels in the third quarter.

“They [Louisville] present such problems in their motions and condensed formations that you don’t really get to cover the guys the way you normally would,” Diaz said.

Cardinals receiver Tutu Atwell also impressed against his hometown team. The Miami Northwestern High alum caught eight balls for 114 yards and two scores. While Atwell is a special talent, he won’t be the only elite pass catcher UM faces. The secondary will have to step up as the schedule heats up.

Miami stayed disciplined for much of the opener against Alabama-Birmingham. The ACC opener on the other hand, wasn’t as rosy.

UM was penalized 11 times for 89 yards against Louisville. Diaz says the crowd—totaling just over 10,000, huge by 2020 standards—was a factor in forcing “procedural penalties.”

But the free yardage the Canes allowed was excessive at best. Quincy Roche jumped offsides early in the second half, making a third and 8 a third and 3, and allowing the Cardinals to score a play later. A number of first half fouls stalled drives and kept the game as close as it was well past halftime. Diaz will have to address this in practice, because 89 penalty yards will often be a team’s downfall.

“We can still be so much better. Obviously, the penalties were just drive killers; a lot of times really just kept us in the way of ourselves,” said Diaz.

Miami won by 13. But it wasn’t pretty all night. Penalties and other miscues kept the game within reach for Louisville for much for the night, but the Canes firepower was too much for the Cards to keep up with.

Florida State is next. College GameDay will be in Miami and the Seminoles are sure to be ready in spite of their slow start to the season. It’ll be on Diaz and his players to fix their mistakes before the rivalry matchup, where the Hurricanes will look to win their fourth straight in the series.