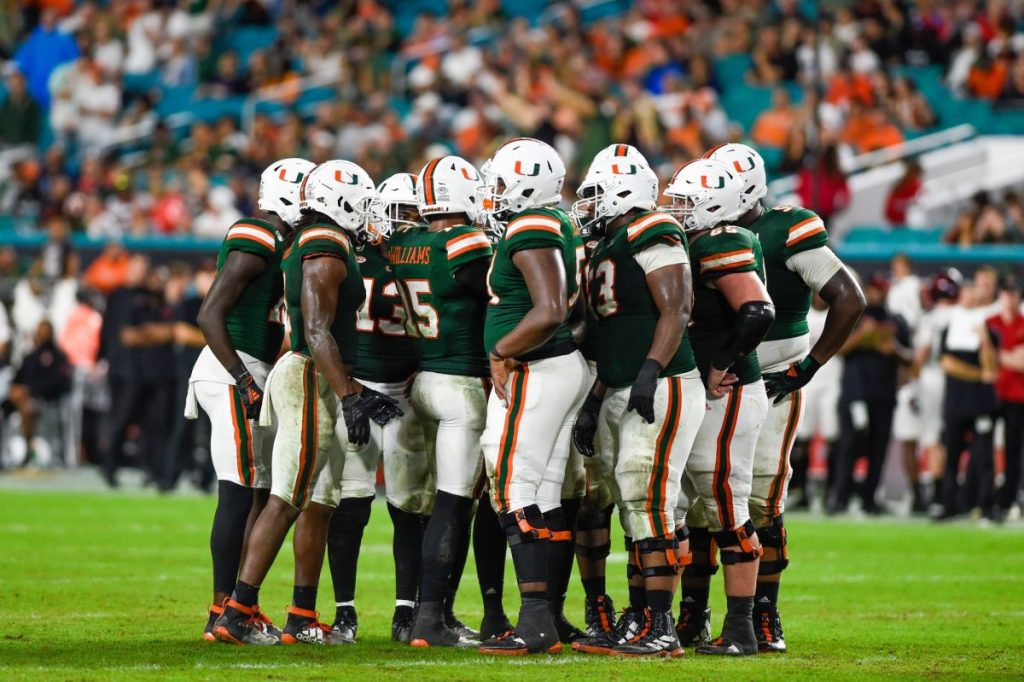 Miami's offense huddles during its game versus Louisville at Hard Rock Stadium on Nov. 9, 2019. The Hurricanes beat the Cardinals 52-27. Photo credit: Jared Lennon

In the first ranked meeting between two ACC teams this season, the No. 17 Miami Hurricanes travel to Louisville, Kentucky to face the No. 18 Louisville Cardinals.

Miami is coming off a solid 31-14 win over the University of Alabama at Birmingham last Thursday. Junior running back Cam’Ron Harris led the team with 134 rushing yards and two touchdowns. Redshirt senior quarterback D’Eriq King threw for a touchdown and ran for a touchdown in his debut as a Hurricane and continued his now 16 game streak of games with a throwing and rushing touchdown.

But traveling to Louisville will present a different challenge for the Hurricanes. The prime-time game at Cardinal Stadium is the location of College GameDay and at the 7:30 p.m. kickoff, there will be approximately 12,000 fans in the stadium.

On the field, Louisville presents one of the most dangerous receiver cores in the ACC in junior Tutu Atwell, redshirt senior Dez Fitzpatrick and sophomore Braden Smith. Atwell, a Miami native, was a 2020 preseason All American pick and led the ACC in receiving yards last season with 1,275 yards. The Cardinals are led by second year starter, redshirt junior quarterback Micale Cunningham. Cunningham passed for a career high 2,065 passing yards and 22 touchdowns last season. Louisville’s run game is dominated by redshirt sophomore Javian Hawkins, who rushed for 1,525 yards and had eight 100-yard rushing games last season.

“Their combination of quarterback, running back and wide receiver is right up there at the top three with Clemson and North Carolina in terms of skill position and explosion on offense,” Miami head coach Manny Diaz said in a press conference earlier this week. “They are probably the best outside zone running team in America.”

If this game is anything like last year’s matchup between the two teams, than the Hurricanes should have nothing to worry about. Miami defeated Louisville 52-27 last season in a game where former Miami quarterback Jarren Williams set a school record with six passing touchdowns. But Diaz knows Louisville has improved since then, especially on the defensive front.

“The biggest difference is that their defense has made a great transformation,” Diaz said. “Their kids are lot more more confident, playing very aggressively. They tackled outstandingly for an opener.”

Louisville defeated Western Kentucky 35-21 in its season opener last week. Cunningham threw for a career high 343 passing yards and three touchdowns, rushed for one and threw one interception. The Cardinals fumbled a punt snap on the opening possession that led to WKU’s first touchdown, but performed well after that. The defense had 10 tackles for loss and three sacks.

Miami’s secondary will have their hands full trying to cover the Cardinals wide receiver. Cornerback DJ Ivey struggled last week against UAB, so he will have to play well in order to limit the playmaking ability of Atwell, Fitzpatrick and Smith.

The key for Miami’s defense will be limiting explosive plays by Louisville’s offense. Multiple receivers had plays of more than 60 yards and the offense had four chunk plays of 41 yards or more.

But the Hurricanes, especially King, are up for the challenge.

“I’m excited. Louisville is a great team, they have a lot of great players,” King said in a post-practice interview this week. “This is the reason I came here, to play in a big game like this.”