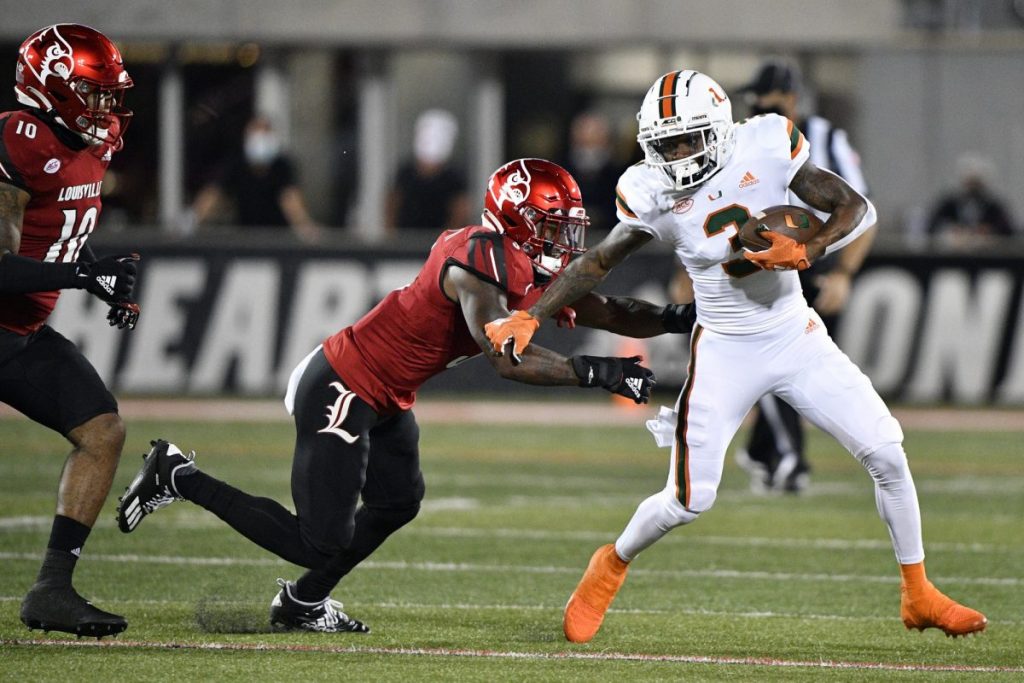 Whatever doubt there was surrounding the abilities of the Miami Hurricanes football team heading into Louisville has undoubtedly been eliminated.

The Hurricanes showed how dangerous their offense can be in a dominant 47-34 win over the Cardinals Saturday night at Cardinal Stadium.

“That’s a very excited locker room right across the hall,” head coach Manny Diaz said in the post-game press conference. “A lot to fix, but a lot to be proud of.”

“The explosive plays, it was what we wanted to be, and I thought D’Eriq was poised and in control,” Miami head coach Manny Diaz said.

“Those are the plays that we designed throughout the week that we knew were going to work,” Brevin Jordan said on some of the longer yardage touchdowns scored by Miami.

And the long-waited reveal of the Turnover Chain 4.0 happened in the second quarter after Al Blades Jr. picked off Louisville quarterback Malik Cunningham. The chain was brought out for a second time in the fourth quarter and worn by linebacker Zach McCloud, who striped Cunningham and recovered the fumble.

Despite the loss, Cunningham recorded 307 passing yards, three touchdowns and one interception. Last year’s first team All-ACC receiver Tutu Atwell was limited in the first half, but ended with two touchdowns on 114 yards and eight receptions.

After a penalty filled first drive, tight end Will Mallory caught a 17-yard pass from King to take an early 7-3 lead, a lead that Miami held for the rest of the game. Freshman running back Jaylan Knighton pushed the lead to 14-3 on Miami’s next drive after scoring on a three-yard drive.

Louisville’s only points of the first half were two field goals.

“Jose adds such confidence to our football team,” Diaz said. “That’s a situation that a year ago we are punting or going for it. That really helps us because those points really matter.”

Louisville’s first touchdown came on their opening drive of the second half on a 17-yard rush by running back Javian Hawkins, who recorded his ninth career 100-yard game. The scoring drive by the Cardinals was helped along by two Miami penalties, including a personal foul and offsides call.

The Hurricanes committed a total of 11 penalties for 89 yards in the game. Some of the early penalties seemed to have been caused by the electronic whistles used by the referees and the noise from the 12,120 fans in Cardinal Stadium.

“We can still be so much better. The penalties were drive killers,” Diaz said. “I think the weirdness of the crowd noise bothered us in the beginning.”

Miami countered immediately on Harris’s 75-yard touchdown run, but the Cardinals marched right back down the field on their next possession and scored on a six-yard pass from Cunningham to Atwell.

Knighton, who scored Miami’s first touchdown, caught a 75-yard touchdown pass from King on the first play of the Canes next drive to give them a 34-20 lead.

The Hurricanes will host in-state rival Florida State next Saturday, Sept. 26, at 7:30 p.m. Hard Rock Stadium will also be the site of ESPN’s College GameDay.