Blondel was just a child when she began her career as a singer, but in high school, she found a second passion: the African folkloric art of belly dancing.

Centuries before Shakira brought this classical style to MTV, belly dancing was a traditional Egyptian ritual performed by women, for women to encourage healthy childbearing.

“After a while,” Blondel said, “it became more mainstream. All of the Middle East and Northern Africa was doing it.”

Different countries, she continued, all had their own unique styles. And when Westerners began traveling East in the 30’s, they, too picked up the dance and brought it back to their homelands. This cultural transfer resulted in the “Cabaret” style commonly seen in in movies and around the country today, one based more in entertainment and less in ritual. 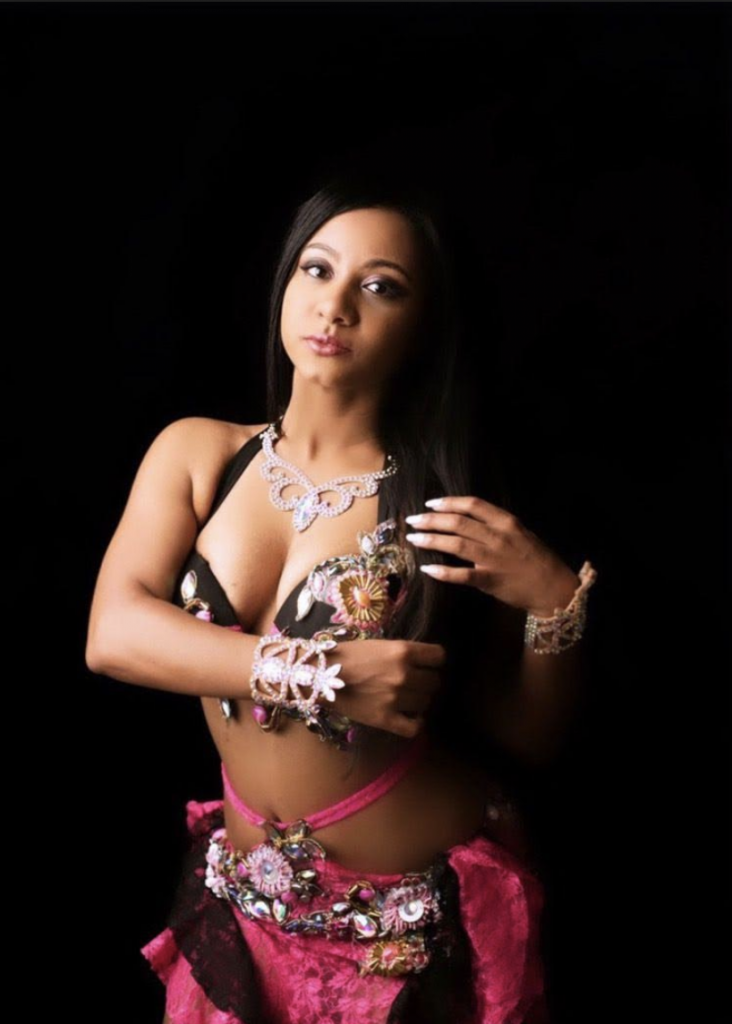 After being cut from her first audition for a belly dance troupe in high school, Blondel dedicated herself to learning the art and eventually started performing it professionally. As a dancer, she has appeared on the Spanish-language network Univision and won first place in the professional division of the Miami Belly Dance Convention. Before Covid cancelled dining in, she spent her evenings and weekends performing at various venues around South Florida, including Kababi Cafe, Cleopatra Lounge, Taverna Opa and more.

Now that eating in is more popular than ever and virtual workout company stocks are soaring, Blondel decided to put her experience and expertise to work, starting her own educational fitness company.

“Intro to Belly Dance,” Blondel’s original e-course, consists of 15 lessons and “quizzes” totaling around 90 minutes, which teach students the basics of belly dancing as well as stretching and self-care for dancers.

The introductory class, which Blondel said students usually complete in about one month, teaches upper and lower body movements including hip lifts, hip drops and shimmies. Videos are broken up into explanations and applications and are designed to be watched and practiced over and over again.

Students learn to focus on “curves not corners,” Blondel said, and—by the end of the course—will know how to follow a routine, dance to Middle Eastern music using basic moves and take care of their bodies before and after dancing.

While the phrase “belly dancer” may conjure up mental visions of fat-less females, Blondel emphasized that this art was for intended for all body types and genders.

“Body positivity is very important in anything,” she said, “but especially in the performance arts. People don’t only look at you for the moves that you’re, doing but for your energy, when you’re not confident versus when you are. Even if you don’t have it (at first)—when you start dancing, you feel confident.”

Before she started belly dancing, Blondel admits she was not in the best shape. However, learning the art helped her to appreciate her body more and even build her workout routine around it.

“Belly dancing (made) me realize ‘Wow, I should be proud of my body, because I’m doing something I couldn’t do a month ago,'” she said.

Now, Blondel say dancing keeps her in her best shape. While pilates and cardio are always on the menu, it’s belly dancing that has become Blondel’s favorite fitness activity.

“It doesn’t look like a workout, but it really is!” she said. “You get a lot of cardio, but also muscle toning.”

For students that took Blondel’s first belly dancing course, a new module may be coming soon. “Intro to Belly Dance 2” will build on the lessons taught in part one, and intermediate and advanced level classes, Blondel said, are likely to follow.

For entertainers of all disciplines, Blondel also offers “Professionalism for Entertainers,” which is a lecture-based course that teaches those looking to make a living off performing everything from audition mistakes to avoid to dealing with sexual harassement and unrealistic body standards in the industry.

Additionally, Blondel offers private lessons over Zoom for aspiring dancers looking to further build their skills, and she’s looking forward to the day when practicing in person will be a little on the safer side.

But, when life gets back to that level of normal, will Blondel be returning to her day job in HR? Don’t bet on it.

“I believe in BellyPOP,” she said simply. “My number one goal is to inspire people to do something different and to keep learning and being the best version of themselves.”

“This is really what I think I’m going to be doing in my future,” she added. “This is my passion and my dream. I’m really trying to stay optimistic about this company, and (I’m hoping) it can continue to be a full-time business.”