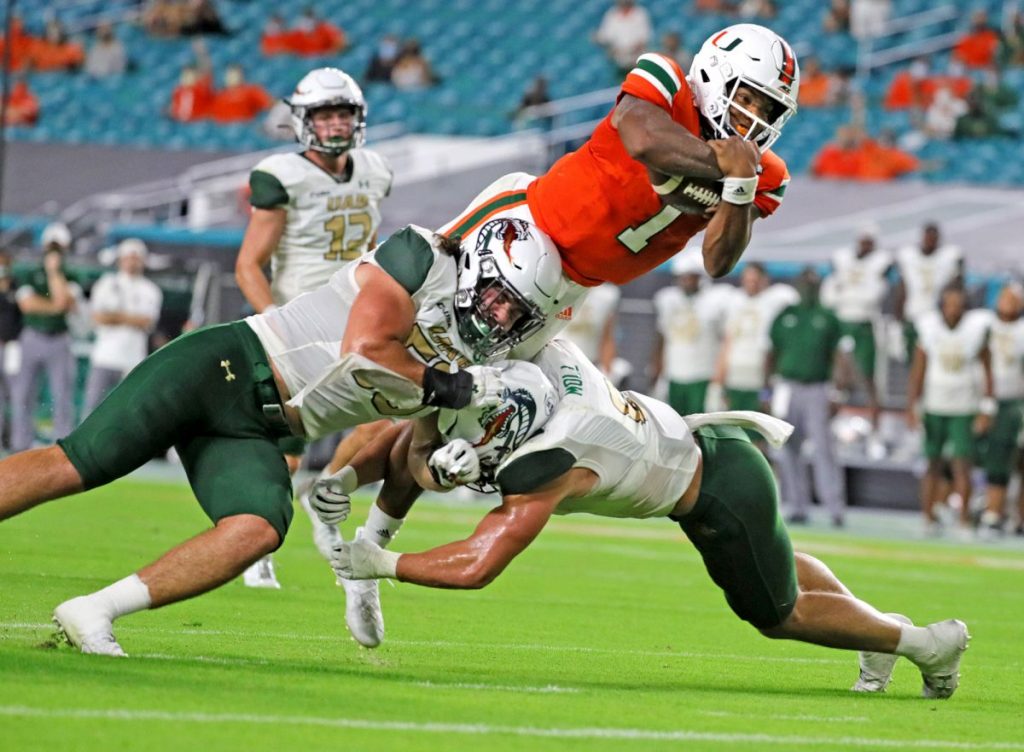 D’Eriq King showed up at Miami to help return the Hurricanes to their winning ways and Thursday night he proved he is capable of exactly that.

The redshirt senior quarterback led his team to a 31-14 victory over the University of Alabama at Birmingham Thursday night in front of a crowd of 8,153 fans at Hard Rock Stadium.

“D’Eriq, with his running ability on some of those scrambles, there’s always the threat of an explosive play,” Miami head coach Manny Diaz said after the game.

Despite the shaky start, Miami’s offense looked entirely better than last year’s. The offense ran 78 offensive plays with no turnovers and rushed for a combined 337 yards.

Junior running back Cam’Ron Harris accounted for 134 of those yards and two touchdowns, including a 66-yard touchdown run that was the first of the season for the Hurricanes.

“Cam’s work ethic this calendar year has been through the charts so you always want to see a guy like that rewarded,” Diaz said after the game.

In addition to running more plays, the Hurricanes noticeably ran the ball more times than they passed it. The team totaled 52 carries compared to 26 pass attempts, 17 of which were successful.

“We wanted to make a statement and we wanted to pound the rock,” Diaz said.

King said he didn’t know they were going to run the ball as much, but shed light on the situation.

“[UAB] came out in a defense that we didn’t rep at all in practice and we had to adjust,” he said. “I think it was a great in-game adjustment and I think we made it work.”

UAB scored the first touchdown of the game on a 16-yard touchdown pass from quarterback Tyler Johnston III to receiver Austin Watkins Jr. that was the result of a fumble on a punt return by UM receiver Mark Pope.

But Harris’s touchdown quickly evened the score and Miami never trailed the rest of the game.

King showed a glimpse of his running abilities with a 12-yard dash that ended with the quarterback diving over multiple players into the endzone. The Canes held a 14-7 lead at halftime.

Miami fans were undoubtedly relieved when kicker Jose Borregales, a graduate transfer from FIU, nailed a 25-yard field goal in the third quarter that increased Miami’s lead to 17-7. Kicking was a big area of concern for the Canes last year, but Borregales, who finished the game 1-1 on field goals and made all the extra points.

UAB’s star running back Spencer Brown scored the only other touchdown for the Blazers late in the third quarter. Brown, the all-time leading rusher at UAB, was held to 74 rushing yards on 16 carries.

“Everything we game planned, we saw in the game today, so I think we did a really good job,” defensive end Quincy Roche said on Miami’s ability to stop UAB’s run game.

Harris went on to score another touchdown, a four-yard run, and in the closing seconds of the third quarter, tight end Brevin Jordan caught a four-yard touchdown pass from King.

Jordan, one of three Mackey Award finalists from last season, was targeted sparingly in the first half, but finished the game with 51 yards on three catches and a touchdown.

Defensively, middle linebacker Bradley Jennings led Miami with six total tackles, two solo tackles and two tackles for loss. Graduate transfer Quincy Roche, playing in his first game as a Hurricane, accounted for the the team’s only sack of the night.

“It’s a huge relief always, getting the first one under my belt,” Roche said about his sack.

It wasn’t lost on Miami that it has taken a lot of sacrifice and hard work for the team to get to be able to play in tonight’s game.

“Everything that they did to get us to this day, starting back at June 15..kept each other safe..gave us the opportunity to play today,” Diaz said.

The Hurricanes will have another opportunity to play next Saturday when they head to Louisville, Kentucky to face the University of Louisville Cardinals in the team’s first ACC matchup of the season.