Home » Football is back: Everything you need to know before tonight’s game

Football is back: Everything you need to know before tonight’s game 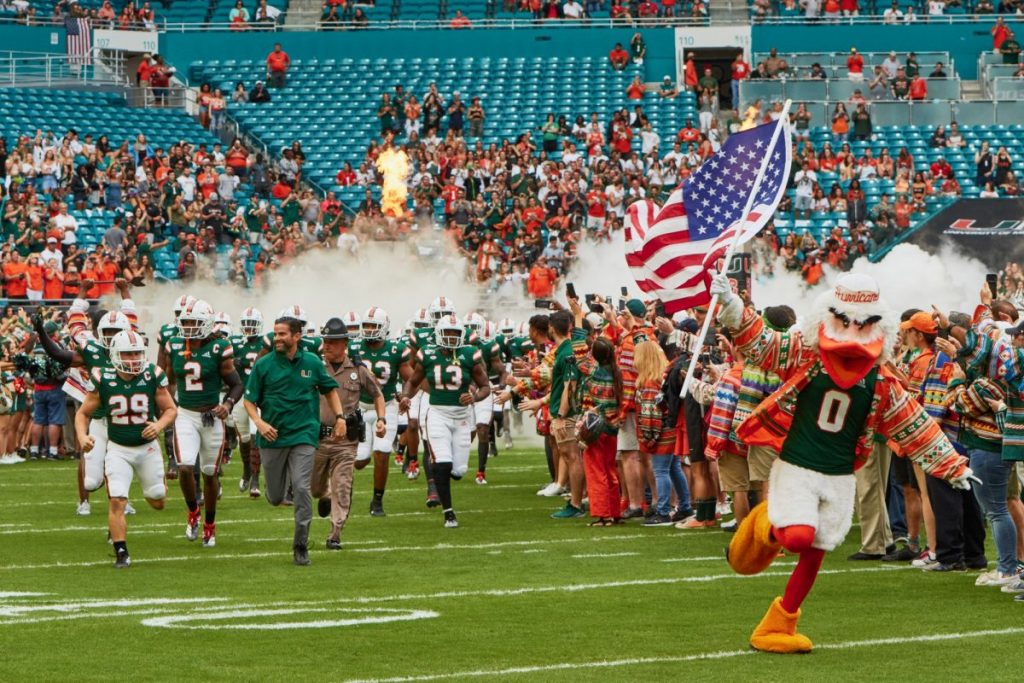 The Miami Hurricanes, led by Sebastian the Ibis, charge through the smoke at Hard Rock Stadium before Miami's game versus Louisville on Nov. 9, 2019. Photo credit: Josh Halper

After an unprecedented offseason, the Miami Hurricanes will attempt to return to normalcy when they kick off their 2020 season on Thursday night.

The Hurricanes are hosting the University of Alabama at Birmingham (1-0) at 8 p.m. at Hard Rock Stadium in the first Atlantic Coast Conference game of the season.

The effects of the Covid-19 pandemic will be evident at the stadium. 13,000 mask bearing fans will be in attendance for the game. In a stadium that holds over 65,000, fans will be socially distanced and have to follow strict protocols for purchasing food and movement throughout the stadium, according to Dolphins CEO Tom Garfinkel and Florida Governor Ron DeSantis. Absent from the stadium will be UM students, as the school administration announced that students will not be allowed into Hard Rock Stadium for the first two home games, which includes a Sept. 26 matchup with in-state rival Florida State.

UAB, a Conference USA team, finished last season with a 9-5 record, good for first in the division. The Blazers have the advantage of already having played a game this season. They defeated Central Arkansas 45-35 last Thursday to set a league record for their 19th consecutive home victory, the nation’s fourth longest active home streak.

The Blazers used two quarterbacks in their first game, but are led by redshirt junior quarterback Tyler Johnston III who went 17-of-25 and threw for 143 yards, two touchdowns and one interception. Redshirt freshman Bryson Lucero was the other quarterback to see game action and he completed 7-of-9 passes for 83 yards and his first collegiate touchdown.

Where UAB dominates is in the run game behind star running back Spencer Brown. The 6-foot senior became UAB’s career leader in rushing yards last season. He entered his senior year with 3,122 career rushing yards and was named to the Doak Walker Award Preseason Watch List, an award given to the top running back in college football.

“They’re a very experienced team who’s been in games,” Diaz said after last Friday’s fall camp scrimmage. “The moment will not be too big to them and we know we’ll have to play our best to beat them.”

As for the 14-point favored Hurricanes, a frustrating 6-7 record in 2019 that included two losses to Conference USA teams led to a complete overhaul of the offense. New offensive coordinator Rhett Lashlee, hired from SMU, is known for his up-tempo spread offense that will utilize Miami’s offensive weapons.

The most important offensive weapon: new quarterback D’Eriq King. The 5-foot-11 graduate student transferred from the University of Houston in January and will attempt to be the offensive leader the Canes have been desperately missing in recent years.

At Houston, King threw 82 total touchdowns, including 50 passing touchdowns for 4,925 passing yards, and rushed for 1,421 rushing yards with 28 rushing touchdowns in 22 starts. He has a veteran running back in Cam’Ron Harris to rely on and an experienced core of receivers. Most importantly, King has the dynamic tight-end duo of juniors Brevin Jordan and Will Mallory.

The combination of Lashlee’s offensive scheme and King’s play have players buying in to the potential of the offense.

“The game plan we’ve been practicing on Greentree is going to work in games,” senior receiver Mike Harley said in a post practice press conference this week. “Just watch the game. The offense is going to come alive.”

Miami also had to make major adjustments on the defensive side. The nation’s top defensive end and probable top five NFL Draft pick Greg Rousseau opted out of the season in early August. But the Hurricanes had already secured another top defensive end in Quincy Roche, who transfered from the University of Temple in the offseason. Roche will play opposite redshirt junior Jaelan Phillips. The former No. 1 overall recruit in the class of 2017 sat out last season after transferring from UCLA.

This is the only non-conference game the Hurricanes will play before facing a full slate of ACC teams, including Clemson and North Carolina.

Emotions are expected to be high for players and coaches alike. Although running through the smoke to a much smaller audience will be a different and unusual experience, at the end of the day it’s just a football game. Most players feel fortunate to be able to play at all.

“Couple months ago, nobody thought we’d be playing,” King said in a post-practice interview this week. “It’s an honor for me to go out there and play my first game.”

“I think there will be a lot of emotion,” Diaz said. “The feeling of gratitude that we get to go out there and play, because that has not been promised. But that has to quickly go because once we line up to kickoff, it is all about ball and we have a lot of respect for the team we are playing and all those emotions will be short lived when the foot hits the football.”