Frats continue to party despite Covid-19

Frats breaking rules is nothing new. But during COVID, it takes new meaning.

“I was at Sig Chi…People literally had to like squeeze on top of each other to walk by,” said an anonymous student. This student is one of multiple who have described parties hosted by fraternities across Miami on a weekly basis. 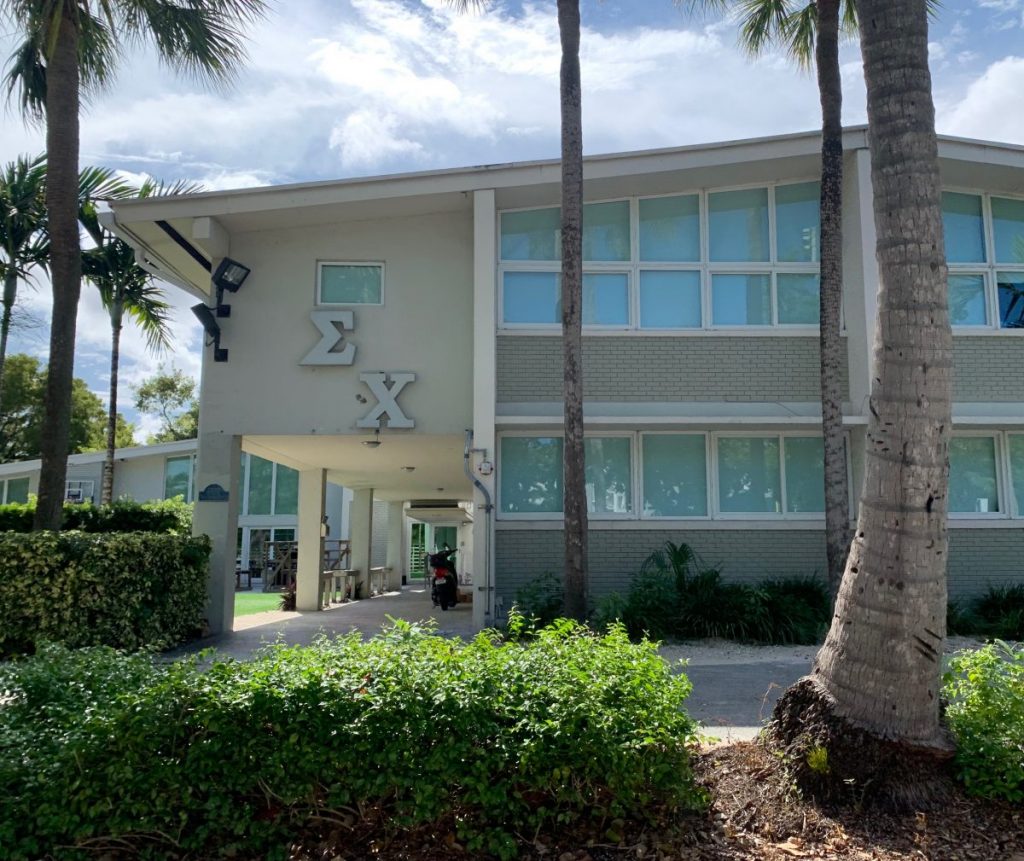 The Sigma Chi fraternity house, near campus, pictured on Tuesday, Sept. 8. The house is allegedly the site of parties, despite COVID-19 policies. Photo credit: Inés Eisenhour

Sigma Chi’s reported party, according to multiple anonymous sources who either attended the event or saw it posted on social media, is one of many alleged Greek life events that have been hosted on a weekly basis, undeterred by University of Miami’s new Covid-19 rules.

“They had events at off-campus houses and also at the official frat houses with 50 to 60 people,” another source said. The source describes a typical frat party, lots of drink sharing, drugs and swimming in pools, all done in close proximity with no masks.

The accounts from sources, some of whom are involved in Greek life, paints a picture of several fraternities hosting parties on a regular basis with little to no regard for the UM’s Covid-19 guidelines. Fraternities who multiple sources repeatedly said hosted parties in addition to Sigma Chi, are Sigma Phi Epsilon and Pi Kappa Alpha, commonly referred to as Pike.

Both Sigma Chi and Pike were put on probation two semesters ago for illicit parties and are now considered in “good standing.” In addition to last year’s probation, Pike was previously removed from UM in 2016, but was recharted in spring of 2018.

“They aren’t even trying to hide it, they are posting it all over social media,” said another source, who declined to say if she attended any of the parties.

All the sources contacted for this story who spoke to The Miami Hurricane requested anonymity out of fear of retribution by the school or fraternities. Several students stated they anonymously reported the parties to administration, which has yet to take any known action against fraternities.

The sources provided various levels of evidence, from repeating the same descriptions of social media posts, to physical addresses where the parties were happening. Others who attended the parties described the events in detail.

“All my friends reported the parties,” a source said.

As far as the source knows, all the reports were made anonymously. Most sources stated they reported it to the university tip lines, but one went as far as to call UM police on the day of a party and provided an address.

“We have to differentiate between what is a complaint and what is a rumor,” said Ryan Holmes, UM’s associate vice president of student affairs and dean of students. Holmes acknowledged multiple reports of Greek life activities to the dean of students office, but stressed that none of them came with evidence.

“There’s no picture, there’s no address, there’s no evidence,” Holmes said of the majority of complaints filed to his office related to Greek life. “And on top of that the reporter wants to remain anonymous, even if we want to follow up, our hands are tied because we don’t even know who the reporter is.”

As rumors have spread across campus of parties, students expressed frustration of what they viewed as a lack of culpability.

“Frats never get in trouble, it’s messed up,” said a sorority member who reported a party. “They just get way too many probation periods.”

Holmes isn’t deaf to the perception and rumors that fraternities are not punished properly.

“It’s unfair to my team,” Holmes said. “In my business your reputation is key. If you get a reputation of not taking those things seriously, it is not a good thing, and that reputation is not deserved in my opinion.”

When asked about the potential punishment for an organization that was found to be hosting parties of 30-60 students, he did not give specifics, but did say it would be “severe.” Professors and students who were interviewed for this article said they felt the fraternities who are partying should be shut down for at least a year.

As Covid-19 cases across campus continue to rise, many have become frustrated. Both professors who agreed to be quoted asked for anonymity in order to speak candidly.

“Not a single administrator can be surprised by this,” said one of the professors who teaches an in-person class. “It was an inevitability–there’s nothing better or worse about UM students. This is happening at probably every major college that brought students back. It should have surprised no one.”

Multiple professors and faculty members who are known to be active supporters of Greek life on campus were contacted to talk for this story. None agreed to comment.

“We told the president and provost this repeatedly. We said what about people who live off-campus and go to parties?” another anonymous professor said.

The professor recalls numerous Zoom meetings with administrators. According to the professor, in one of these meetings faculty were frustrated by the response they received when the aforementioned concerns were brought up. The professor says President Julio Frenk looked at them as if they were “terrible people” to suggest students would host parties off-campus and it was “insulting” to insinuate students would do such a thing. Frenk has consistently stressed in public messaging that he trusts students to make the right decisions.

“We all looked at each other and said ‘has he met a f**king UM student?” the professor said. “We respect our students. We just know students party, not all but enough.”

When O’Connell and Slogoff were told about accounts of parties at their fraternities, they immediately declined to comment and directed questions to Sophie Hamilton the president of UM’s Association of Greek Letter Organizations.

“It’s news to me,” Hamilton said of the parties. “It’s frustrating. I spent a great majority of my summer trying to prepare for reopening…I don’t want our community to look bad.”

Hamilton’s frustrations are in line with many faculty and students contacted for this article. The students who stayed home during the parties admitted expressed frustration with their friends who have been attending parties.

“I want to be out there just as badly as they do, but we can’t. I don’t want to put myself at risk and I don’t want to risk my education,” said a student who is involved with Greek life. “They’re putting everything on the line right now. They are putting my mental health at risk, my parents’ money at risk, my housing at risk. I can’t go home.”

Holmes said he welcomes reports of all activity in order to protect the community. Those that wish to remain anonymous are welcome too, but he stresses that they need as much information as possible–be it an address, text messages or photos. He also wants students to feel safe coming to his office with reports.

“Students should never fear for retaliation in reporting,” Holmes said. “We make sure that everyone who brings us information is protected in all the ways we know how.”

Hamilton also volunteered her email for those wishing to report illicit activities for those who wished. “There should be no social events,” she said.

Parker Gimbel contributed to the reporting of this story.