Three days after University of Miami’s president, Julio Frenk, sat for a contentious live interview on national television where he was pressed about the total number of Covid-19 cases at UM and refused to answer, UM has updated it’s Covid-19 dashboard to display cumulative statistics.

The previous dashboard received criticism for only displaying a rolling seven-day average. Now modified, the new dashboard shows cumulative statistics of total cases for both students and staff, and other information on hospitalizations and testing data. However, the numbers are different than previously reported, raising more questions.

When the original dashboard was first released on Aug. 20 The Miami Hurricane started tracking the numbers listed and found the total number of cases could be as high as 301. Today, UM lists the cumulative total as 216 cases.

“There’s more information there which is always good,” said a professor who wished to remain anonymous in order to speak candidly. The professor said the new dashboard is much better than before, but he still has questions. 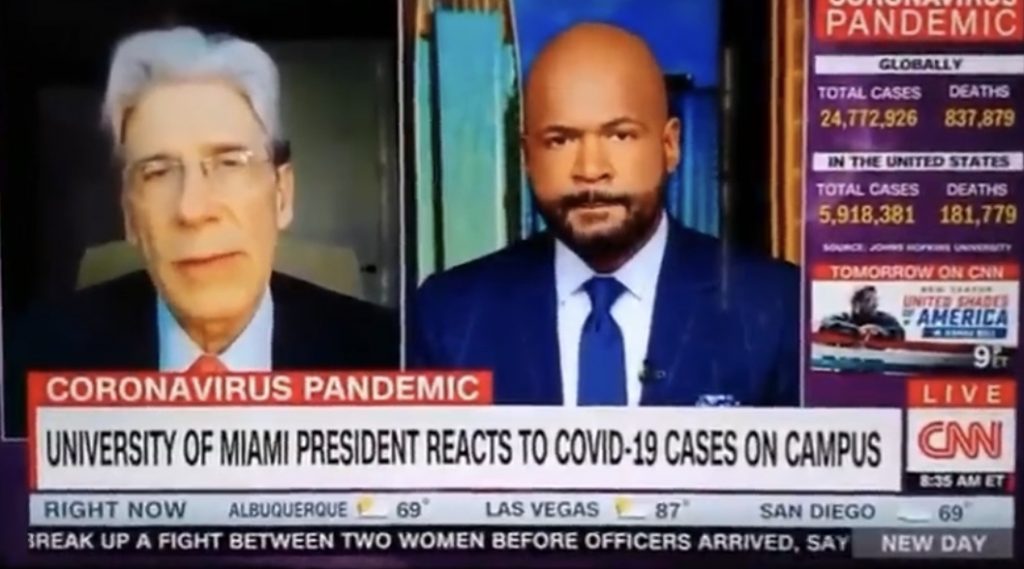 On Aug. 29 when Frenk appeared on CNN to answer questions about the dashboard, he repeatedly declined to disclose the real cumulative number of cases of students and faculty. At first, Frenk stated the cumulative number was about 140 and then backtracked and admitted it was over 190, when pressed by the reporter.

For the week of Aug. 20 to 26 the UM dashboard listed 190 cases. This number did not include positive tests on any other days. Two days after the interview, UM’s dashboard reported cumulative numbers from Aug. 16 to 30, and it stated there were 183 cumulative tests.

“The problem I see is there appears to be discrepancies between what is being reported now and what was reported then,” the professor said. “The numbers keep going up and down without an explanation.”

After comparing the original data released with the new dashboard, The Miami Hurricane found large swings in day-to-day positive tests.

On Aug. 27 the UM dashboard listed positive tests from Aug. 25 as 53. The following day, Aug. 28, the dashboard stated there were 19 positive tests on Aug. 25. Of the days reported, 78 percent of the time the numbers changed.

In fine print at the bottom of the screen UM states: “Due to a data processing error some tests were counted twice in last week’s data.” The professor acknowledged the fineprint, but hopes the university will provide more information.

“That may explain some of it,” he said. “But, It wasn’t just a one-time discrepancy or a one-time data processing error. It was something that was going on basically everyday as the numbers were changing.”

UM’s vice provost of research, Erin Kobetz, is working alongside Frenk to lead the university’s tracking and tracing efforts. Kobetz originally agreed to comment for this article but later cancelled her interview.

In a student-media roundtable on Aug. 25 Frenk stressed the importance of communication and openness during a pandemic. Frenk also said that he feels that the dashboard empowers individuals to make decisions.

“So it is both out of my personal conviction about the importance of transparency, but also the very practical experience I have in managing pandemics that communication is such an important piece to reduce the uncertainty that surrounds any pandemic,” Frenk said.

During the roundtable, Frenk said that the university provides the most relevant data in a transparent and clear way.

On both CNN and the round table, Frenk said UM has a contingency plan if outbreaks continue.

“We have a contingency plan where we have every scenario,” Frenk said. According to Frenk, UM has benchmarks where it will close certain buildings, move classes online and finally send all students home. Frenk refused to specify what these benchmarks are on CNN and during the roundtable.

Universities across the country are experiencing rises in Covid-19 cases and many have made the decision to go fully online. The University of Carolina in Chapel Hill cancelled in-person classes when they had 130 students test positive. The University of Alabama recently became the first school to report more than 1,000 cases.

“We’re all going to have days where we don’t feel like putting on our masks or staying socially distant from close friends,” Kobetz said to UM News. “But we have to remain vigilant.”

The professor acknowledged that administration is in an unprecedented situation that no one anticipated. But he still wants them to be more open

“If we don’t have accurate numbers we don’t know what the level of safety is,” he said. “As faculty we are concerned that we are heading into this blindly…our top goal is to be safe.”