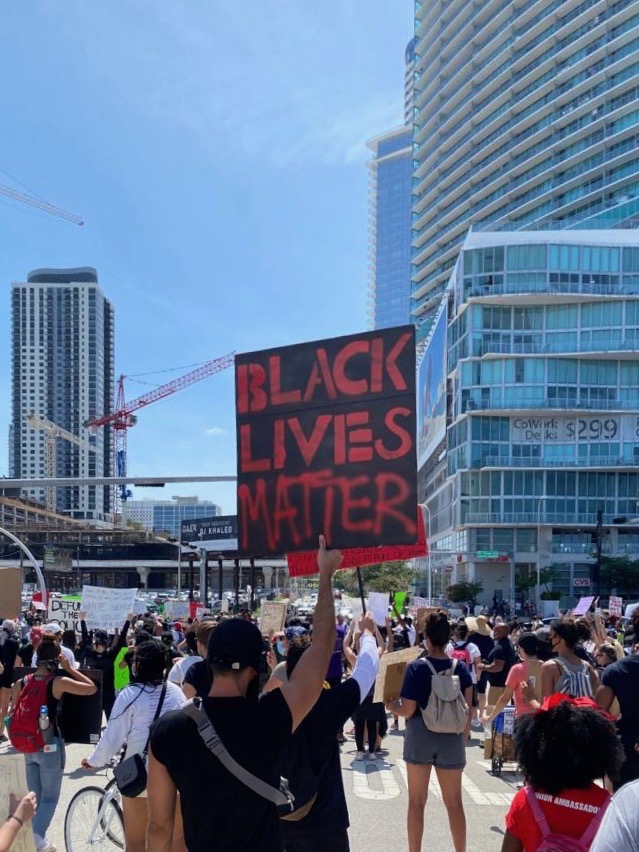 Institutional forces that perpetuate racism and discriminatory practices are being exposed to behind-the-scenes access from cell phone footage and CCTVs onto social media. And in the loudness of this worldwide web cataclysm, protests are being organized and communities are coming together in ways that would make Black people living in the year 1820 proud.

Before I was able to view the movement in more diverse light, I would have close to no faith in non-POC in regards to supporting black and brown people in this deadly battle against racism.

Everyone–classmates, politicians, the president– would justify the murder of innocent lives before the deceased could even rest in power.

And that was how I viewed America, I thought there was very little chance that it could be saved. But this recent Black Lives Matter movement showed me that the chances are greater than once perceived.

In a time of progression towards the social justice of different minority groups, it seems racism is still the outlier. Despite its persistence in existing, nevertheless, one of the most shocking things I’ve witnessed during my time in the Black Lives Matter 2020 movement so far was the unity displayed by supporters from all backgrounds.

The recent rise in the number of protests supporting the Black Lives Matter movement confronted my bias feelings of racial abandonment. It challenged my perception of the American populace entirely. In the light of George Floyd’s untimely, cold-blooded murder, social media helped spread the horrific news. ‘The People’ unionized through social media as well. Petitions on Change.org were created to target discrimination around the nation, George Floyd’s justice petition collected over nineteen million signatures globally, a ground-breaking record for the website. Breonna Taylor has over 11 million people demanding for her justice as well, and Ahmaud Arbery, over 3 million supporters.

One of the eight protests I attended was vibrant in diversity and loud in support. The Florida International University Alpha Phi Alpha fraternity participated in the Miramar protest on July 6th organized by small local NGOs and local city elected officials. Rapper Rick Ross attended as a speaker and as a resident of his old Southern Florida home town. Chews Health, an all-natural juice and smoothie bar stationed in Hollywood, set-up camp at the Miramar protest as well with a ‘community fridge’‒ a place where food, energizers, water, and other supplements are offered for free to those in need, in this case, fellow protesters. And I even ran into a small group of friends holding up signs reading “Asians for BLM.” I saw signs reading “Latinos for Black Lives,” “He called out for his mother. I’m a mother,” and “Hello Kitty says Abolish Police.” Families with small children being guarded by older relatives were prevalent; fathers attending with their daughters and sons who wanted to support; skateboarders with the letters “BLM” spray-painted on their boards joined; high school kids, adults, clubs, and groups from school– the crowd was incredibly diverse.

Political activist groups called The Broward Dream Defenders, Leaders of Liberty, and BLMWeston, which can all be found on Instagram, were amongst the many NGOs across South Florida that were responsible for the many peaceful protests that have taken place. Joining people from many different backgrounds to march, and stand together against oppression. We even had a similar get-together for the celebration of Juneteenth, (a self-appointed national holiday celebrating the emancipation of the last slave state.)

My time protesting for my life and that of my melanated peers is unmatched. I’ve created friendships that I’m proud to say will last a lifetime, connected with activists, writers, musicians, and politicians, and fought for a change; all while wearing a mask of course. It was a sight worth traveling for, a risk worth taking in the light of the violence by the police as well as the coronavirus pandemic, and an experience I’ll never forget. To top the entire experience, five days later I tested negative for Covid-19.

However, just because the noise of the protest is muffled by school life, jobs, internships and Covid-19 concerns doesn’t mean the movement has passed its time in the light. As a matter of fact, it has only just begun. Just recently, The Freedom Georgia Initiative, a mission involving the mass-purchasing of land in Toomsboro, Georgia by 19 families to create the new and improved Black Wall Street is creating talk of emigration and business plans from black folks across the nation. Black people are more unapologetically extra-afro and the hashtags #MYBlackIsBeautiful, #BlackLivesMatter and #EndRacism have been trending on social media for months.

The way I see it, social media platforms have brought more supporters front and center and together, not just from California to Florida, but from France to Italy to Canada to Japan. The Black Lives Matter Movement has seen more supporters than ever before and that’s thanks to social media sharing.

Rachelle Barrett is a senior majoring in political science and broadcast journalism.