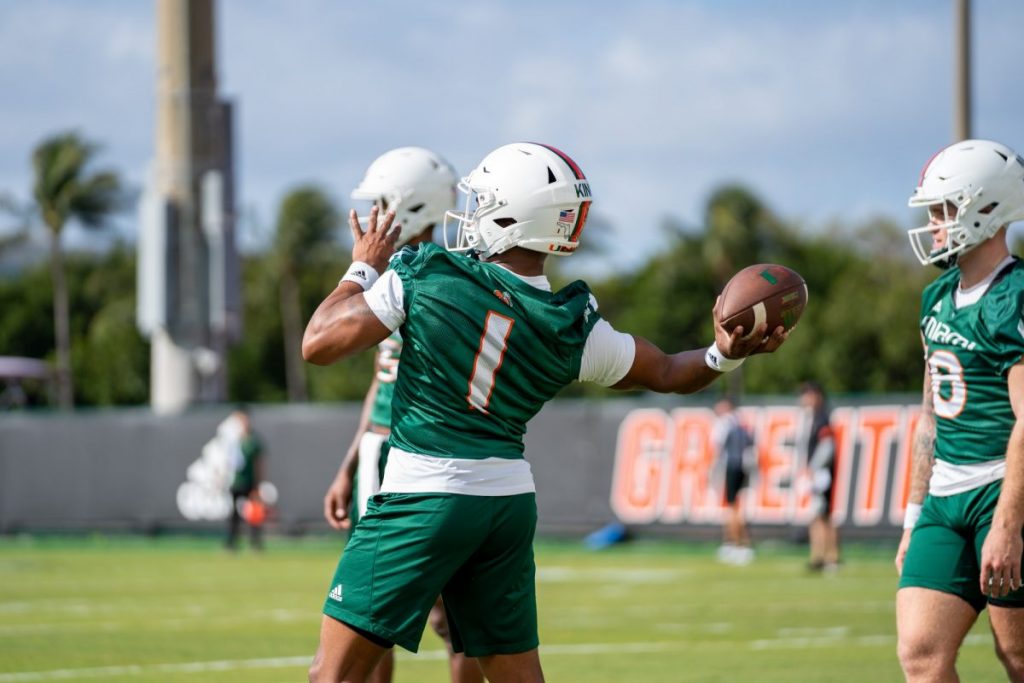 Has game changing quarterback play finally come to the Miami Hurricanes? After muddling in so-so signal calling for years, the Hurricanes may have finally found their answer that will push them to the top of the Atlantic Coast Conference a year after finishing 98th out of 130 teams nationally in total offense.

Redshirt senior D’Eriq King, a transfer from the University of Houston, will look to recreate his 2018 campaign where he threw for 2,982 yards, 36 touchdowns and six interceptions, while rushing for 674 additional yards and 14 touchdowns. That is the kind of consistent, dual-threat season the Canes will need and expect out of their quarterback in order to make noise in a crowded, single-division ACC field in 2020.

Despite only being on campus for a few months, King’s talent and leadership skills have resonated soundly in the on the field and off the field.

“You can go on YouTube and see his plays and his ability to run the ball and throw it,” head coach Manny Diaz said on Fox Sports’ Big Noon Kickoff show Wednesday night. “What you don’t know until you get him in your locker room is what a special person he is. A born leader, someone who just has a great connection to everybody else on the roster, someone people kind of gravitate to. I think that’s what’s really important for our football team, especially in that room where we’ve had some inconsistency and been young for a while now.”

Offensive coordinator Rhett Lashlee similarly raved about the player that will be at the helm of Lashlee’s fast paced spread offense.

“I’ve learned he’s got really good instincts at quarterback,” Lashlee said on a post-practice Zoom call this week. “He’s smart, knows what to do, throws it well, runs it well. He has good intangibles, instincts at the position. He’s a quick study, understands space, the game, how defenses play, and rarely makes the same mistake twice.”

King, who stands at 5’11, has a chance to revive a dormant line of elite passers that have walked the Coral Gables campus. Once known for the likes a Bernie Kosar, Vinny Testaverde, and Ken Dorsey, “Quarterback U” hasn’t found an heir that has been able to lead Miami back to a conference or national title since moving to the ACC in 2004.

With a prolific passing-catching corps, a young but potentially scary three-headed monster at running back, and an improved offensive line under new offensive line coach Garin Justice, the Canes have not just the quarterback they need, but also the parameter pieces needed to make the offense effective as a whole.

While King cemented himself as the presumptive starter almost immediately after arriving in South Florida, a battle ensues underneath King over what the depth chart will look like at quarterback.

Redshirt junior N’Kosi Perry is battling fellow third-year Tate Martell for the primary backup spot. Perry started 10 games for UM over two seasons, completing 6.1 yards per pass attempt and 52 percent of his throws. But he has struggled with consistency over his career, with nine interceptions to show for. Martell threw just a single pass for the Canes last season in a first half appearance against Louisiana Tech in the Walk-On’s Independence Bowl. The Ohio State transfer also lined up at receiver in the first two contests of 2019, gaining seven total yards on as many touches.

Redshirt freshman Peyton Matocha and true freshman Tyler Van Dyke round out UM’s scholarship QB room. Although unlikely that either freshmen will see the field, Van Dyke, who stands at 6’4 and 220 pounds, was the No. 2 pro-style quarterback nationally coming out of high school and has shown potential in fall camp scrimmages.

While King will be the centerpiece of the offense, he also suffered a number of injuries over his career at Houston. The hope is that UM will have stability at quarterback, propelling them to new heights in 2020, but four passers will be ready to be the next man up should anything unexpected happen.

‘Canes Care for ‘Canes, or do they?
UM’s updated Covid-19 dashboard differs from previously reported cases