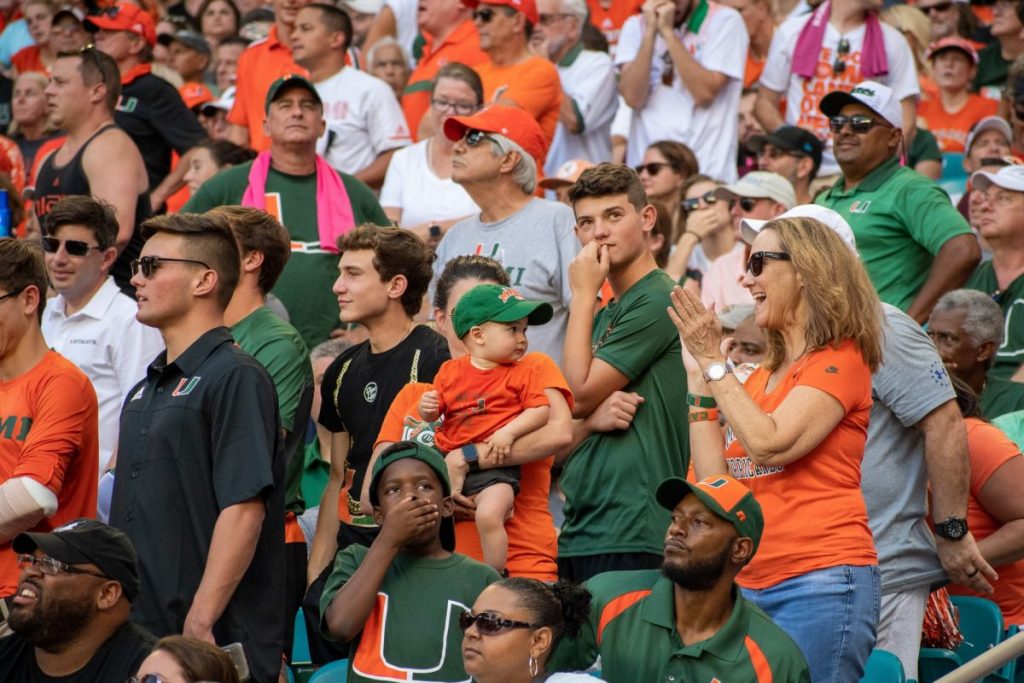 The world we are living in today has been characterized by a lack of precedence, and the ever-evolving impacts of the Covid-19 pandemic have been felt in every facet of our society. In the sports world, the changes have been obvious. Stadiums and arenas were left vacant, quiet. The NBA – after having its season suspended in March – has successfully adapted to the times by adopting a “bubble” strategy to resume play as safely as possible. Meanwhile, the MLB and MLS have found greater difficulty keeping its schedules intact following outbreaks of Covid-19 within teams.

In the case of football, both college and professional, the sport may have dodged a bullet. As the United States continues to see decreasing trends in Covid-19 cases, the possibility of at least a semi-normal football season grows more encouraging by the day.

The Miami Dolphins and the Miami Hurricanes made an enormous stride towards a return to normalcy in sports on when they announced the long-awaited plans for fan attendance at Hard Rock Stadium. As of right now, the protocols are calling for a maximum of 13,000 fans per game, filling the stadium to 20 percent of its full capacity.

There has been circulating skepticism surrounding this decision by the Dolphins’ front office, with concerns from both a health and team performance perspective. But as football season draws ever closer, many debate whether having fans – yet alone having a football season at all – is responsible during this time.

The case against having fans – from a health perspective – seems too risky to contradict. In recent weeks, the impact of the pandemic on Miami has labelled the city “the epicenter of the epicenter” and, despite seeing daily decreases, Miami-Dade has 156,910 cases as of Aug. 31.

While the Dolphins have compiled an extensive 46-page long document addressing how they will combat the spread of Covid-19 within the stadium, all it takes is one asymptomatic carrier to spoil it for everybody. Beyond Hard Rock Stadium, the consequences of this can extend as far as UM’s campus community.

To ask 13,000 fans to abide by mask-wearing requirements in blistering heat is unrealistic enough as it is, but many of those fans are likely not to be current University of Miami students. The Dolphins have been public in stating that season-ticket holders will take priority to fill up the 13,000 seats, which means that the members of our campus community will be putting themselves in potential risk among people who may not be taking health protocols seriously.

While UM has done a tremendous job in containing and limiting the spread of Covid-19 campus, there have been 103 positive cases in this week alone at a positivity rate of 18 percent. If thousands of UM students were to take weekly trips to football games, the outcome could be detrimental to the health of students and faculty.

If this scenario seems unrealistic, look no further than what has developed at the University of North Carolina at Chapel Hill. A week after cancelling their classes due to an outbreak on their campus, the North Carolina Tar Heels have forbidden fans from attending their games.

Especially with the arrangement of having fans in “socially distanced seating clusters,” fan attendance at games so soon can potentially be a nightmare brought to life.

These health concerns have been addressed by numerous teams across both the NFL and NCAA. Across the NFL, 15 teams have declared that spectators will not be allowed in stadiums, and college football conferences like the Big Ten and Pac-12 have suspended their seasons altogether due to an abundance of caution.

With the Hurricanes and Dolphins allowing fans in 2020, the topic of home field advantage comes to question and the various ways it can affect the sport. Here, the numbers speak for themselves.

Over the last three seasons, the Dolphins home-road record splits are at 13-11 and 4-19, respectively. At home, the Hurricanes’ advantage is significantly more dramatic. Throughout the same span, the Hurricanes went 16-4 at home and 7-7 on the road. With so many teams electing to not have fans for safety purposes, allowing fans at the Hard Rock puts the opposition in a legitimate disadvantage.

However, if fans were to not be allowed in 2020, when does the line get drawn that will allow fans to attend games? With so much uncertainty in the air surrounding a true return to normalcy in sports, it is understandable that sports teams – as businesses – will seek financial stability while abiding by safety protocols to the best of their ability.

In a recent news conference, Gov. Ron DeSantis applauded the Dolphins’ front office for its plans to allow fans at the Hard Rock.

“They aren’t going to make a lot of money this season,” DeSantis said. “Putting all the money they did into this to give fans the ability to watch some football in person, I think, means a lot.”

Dolphins’ CEO Tom Garfinkel echoed the sentiments of the governor, stating that there are ways to be safe other than “staying home and sitting on the couch”. Especially considering the outbreaks that have happened in leagues that have forbidden fans, both the Dolphins and Hurricanes will stress safety and caution in their bold attempt at a partially fan-filled season.

Despite this, the most precautionary measure that could have been made by the Dolphins organization would have been to forbid fans altogether for at least the start of the season. Competition aside, the protocols that they have enacted have trickled down to the Hurricanes, and a lack of caution from a single person could warrant detrimental consequences to our campus community.

In the end, there is only one way to find out whether these protocols will be sufficient to have a safe and successful football season. Hopefully, it will be a success story that will bring pride and morale to Miami in a time when it needs it most.