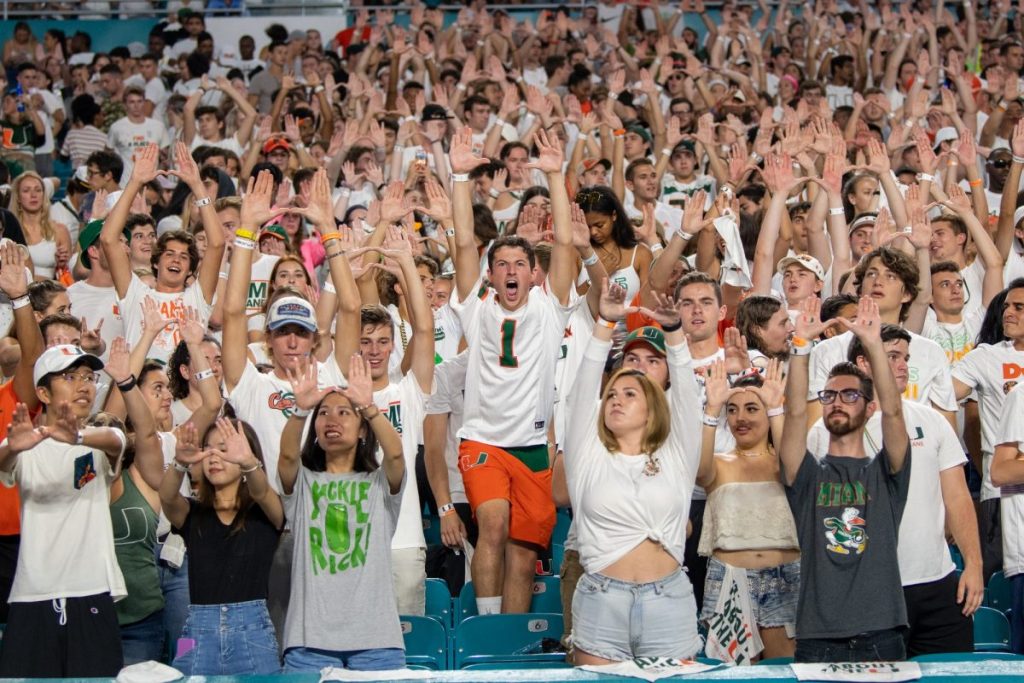 UM Athletics announced the plan for stadium attendance at Hard Rock Stadium for Miami Hurricane football games this fall. A maximum of 13,000 fans will be allowed to attend the home opener on Thursday, September 10 against UAB.

This announcement came just a few hours after Miami-Dade County Mayor Carlos Gimenez and the Miami Dolphins announced that Hard Rock Stadium can host as many as 13,000 fans for Miami Dolphins and Hurricanes games for the upcoming 2020 season. This comes as the number of new COVID-19 cases in South Florida declines and safety measures at the Miami Gardens venue continue to take shape.

“When we started the process back in March of exploring what a socially-distanced stadium could look like, we made the health and safety of everyone the first priority; knowing that if we felt that we couldn’t make it safe, we simply wouldn’t have fans,” said Miami Dolphins Vice Chairman and CEO Tom Garfinkel in a statement.

The facility can hold 65,326 fans when at 100% capacity. Even with just under a quarter of seats occupied on weekends, tailgating will not be permitted at Dolphins or Hurricanes games.

Hard Rock Stadium underwent an accreditation process by the Global Biorisk Advisory Council and earned star facility accreditation in July thanks to a blueprint that includes “cleaning, disinfection, and infection prevention strategies.” The Dolphins and Canes’ stadium is the first NFL facility to earn such accolades.

According to UM, season ticket holders will have first priority to participate in an individual game on-sale. Separate communication will be sent to UM students regarding attendance.

Earlier this summer, Miami athletic director Blake James was skeptical about allowing fans in the stadium.

“I am of the mindset that there is a very good chance we will not have fans,’’ UM Athletic Director Blake James said in an interview with the Miami Herald last week. “I am hoping we will be able to have fans. That’s something that’s up to Miami-Dade County, the government leadership, and whatever decision they make I’ll be 100 percent supportive of.”

UM released policies for the 2020 football season include:

· Changing from manual to contactless toilets and faucets

· No smoking inside the stadium or helixes