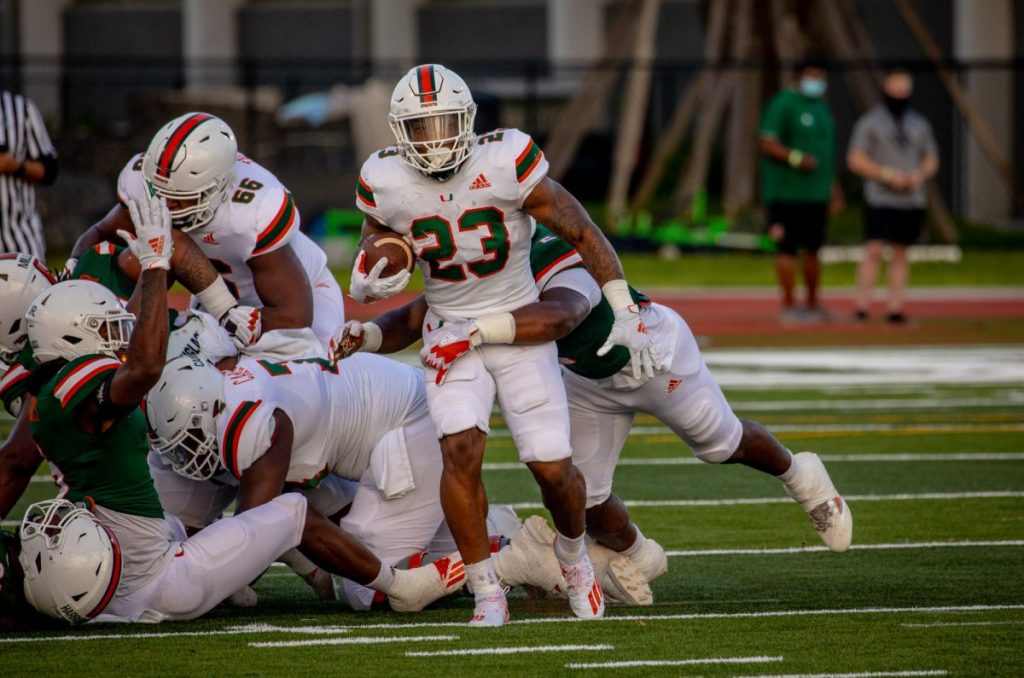 In a change of tune from last weekend’s scrimmage, head coach Manny Diaz was not impressed by the “sloppy” play he saw from his team in the second scrimmage of fall camp held Saturday night.

“It was much too sloppy of a scrimmage,” Diaz said. “Much sloppier than the first scrimmage, way too many penalties, some things we are going to have to sternly address in practice.”

Diaz, however, was more pleased this week with how the defense performed.

Defensive end Jaelan Phillips, along with the addition of Quincey Roche and Jon Ford, who both missed last week’s scrimmage, added an “overall edge” to the play of the defense.

“First half I thought the defense really took it to the offense,” Diaz said. “You could see the addition of some of the guys coming back on the d-line. Quincey and Jalen were both very disruptive. We had very few negative plays in the first scrimmage and it seemed like we had a lot more tonight.”

Running back Cam’Ron Harris was the star of the Hurricanes offense with 77 yards on 13 carries, a rushing touchdown and two receiving touchdowns. Harris ran through three tackles in his first touchdown of the game in what Diaz described as an “impressive” and “older guy type play.”

Freshman running backs Jaylan Knighton and Donald Chaney Jr. performed well for the second weekend in a row, with each player rushing for over 40 yards and a touchdown.

“They got better as the scrimmage went on,” Diaz said on the freshman. “I think after their big plays a week ago, sometimes you have the tendency to want to hit a grand slam with no one on base and i felt that early on. They were trying to bounce things that weren’t there and once they started trusting their cuts and just sticking with becoming north-south runners, once they clear that front line, now they can use that explosion, but early on they were running into some trouble by trying to make every play a touchdown.”

D’Eriq King led Miami at the quarterback position with 95 passing yards and two touchdowns, but Diaz described the play at quarterback as “okay.”

“Thought it was okay, not as good as it was a week ago. We wanted some adversity because last week I think it was so simple and we wanted to see how guys responded.”

With less than three weeks before Miami is set to take on UAB on Sept. 10, Diaz anticipates a big week of practice this week.

“We got to be able to extend these drives, especially in the heat,” Diaz said. “We need a hot week of practice and we just have to continue to push our guys through this week and make it really hard on them and really find out who we can count on to go compete against UAB.”