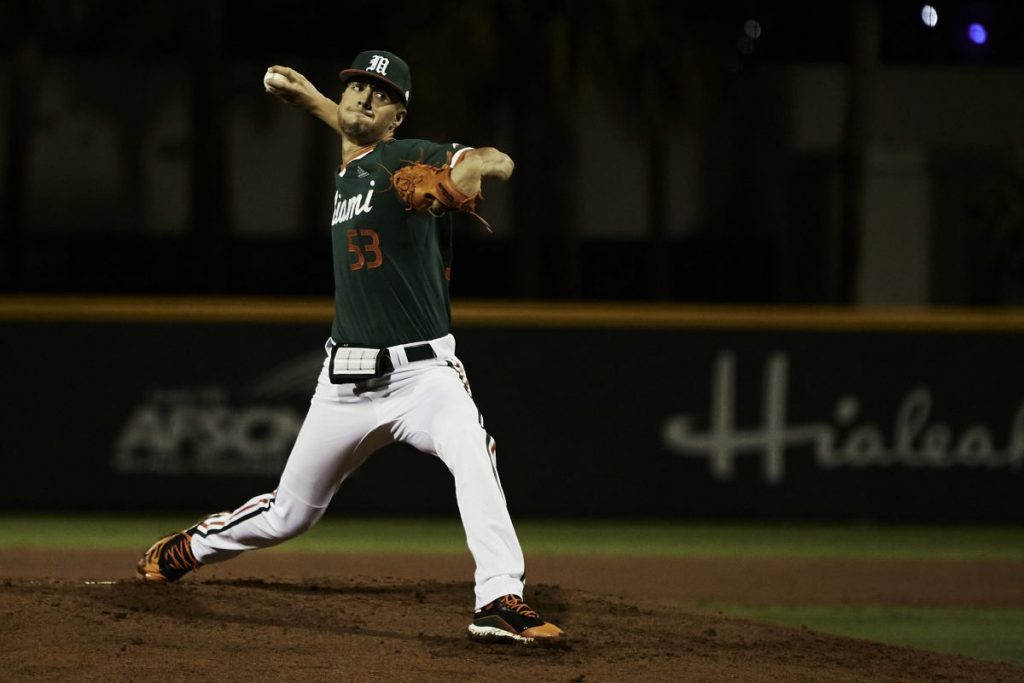 Van Belle, a right-handed pitcher, signed with the Boston Red Sox on Monday after his redshirt senior season in Coral Gables was halted due to the pandemic. 2020 appeared to be a budding breakout year for the Friday night starter, having logged a 0.68 ERA over four starts, striking out 38 batters while walking just four over 26 and 1/3 innings. He recorded a 2-0 record during UM’s 12-4 season this year.

“These past couple of months have been nothing short of an emotional rollercoaster for all of us student-athletes. I would do anything to be suiting up with the #CaneGang right now getting ready to pile up in Omaha and bring a National Championship home to Coral Gables but unfortunately my time as a Miami Hurricane has come to an end,” Van Belle said in a statement on Twitter.

This past spring was Van Belle’s second year in the weekend rotation, having had a 3.30 ERA and 10-2 record over 16 starts in 2019 and helping lead Miami to a NCAA Regional.

Keysor, a right-handed reliever, joined Van Belle in signing a pro contract, inking a deal with the Cincinnati Reds. The Windemere, Fl. native had largely been a bullpen piece for UM in his two season with the program, making 30 appearances in his time as a Hurricane—including five starts in 2019—registering a 6-1 career record and 4.07 ERA along with 47 strikeouts over 55 and 1/3 innings pitched.

“I’m excited to announce that I have agreed to a deal with the Cincinnati Reds organization I would like to thank the University of Miami coaches and players for providing me with the best two years of my life. While the pandemic may have taken away our chance to reach our goals, it’s safe to say that we made some incredible memories on the way. Can’t wait to watch the boys take off in Omaha next year. #Cane4Life,” Keysor said in a statement on Twitter.

Thankful to the @Reds for this opportunity pic.twitter.com/kUHKWdCtDs

Since both players weren’t picked in last week’s abbreviated five-round draft, neither was eligible to earn signing bonuses greater than $20,000, an amount they were willing to take even though they both were granted an extra year of eligibility by the NCAA for spring sport student-athletes.

Both Van Belle and Keysor came to Miami via the junior college route, with Van Belle spending three seasons at Broward College (missing two of those seasons due to injury) after coming out of Pembroke Pines’ Archbishop McCarthy High School. Keysor meanwhile spent two years at Eastern Florida State College before becoming a Hurricane.

The departures of Van Belle and Keysor comes on the heels of fellow arms Slade Cecconi and Chris McMahon being picked in last week’s draft by the Diamondbacks and Rockies. This will leave Miami without any of 2020’s weekend starters in 2021, forcing a rebuild of the pitching staff.

Student-athletes welcomed back to campus, athletic department details plan for return to campus
Juneteenth: The holiday you didn’t learn about in history class