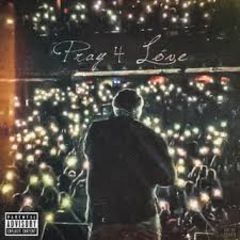 For Rod Wave, creating music goes beyond endorsements, revenue and statistics. In an interview with Complex, the rapper stated that he “just wanted to make music, because it’s how I get stuff off my chest. I want it to always feel like my escape.”

On April 3, the Florida native dropped his second studio album, “Pray 4 Love,” rapping about very real and personal issues like gang violence, incarceration and heartbreak. He managed to enter mainstream consciousness with his debut album “Ghetto Gospel,” but Rod makes it clear here in this project that he does not seek or desire the validation of mass media anymore.

The title track “Pray 4 Love” opens the album. With this track and the others that follow, Rod almost makes it seem as if we are reading the very pages of his diary. He opens up about his family and his trust issues with lyrics like “It’s hard to separate the fake, ‘cause they chose us/ Everybody showed up when we blowed up.”

For Rod, the triumph of “Ghetto Gospel” was a double edged sword as he began to feel that those closest to him were only there because he was making money and gaining stardom.

He further discusses broken relationships and loyalty in his most revealing and intimate track “I Remember.” Detailing traumatic events such as his arrest along with his father’s, Rod promises to never forget where he came from. In “No Weakness,” it becomes evident that Rod’s previous life experiences have hardened him, making him believe love is only for the weak: “I don’t shed tears anymore/ Love doesn’t live here anymore.”

Rod addresses his haters in “F**k The World,” acknowledging that individuals may dislike him but continue to stream his music nonetheless. His distaste of modern society and a desire to escape his own harsh reality culminates into a bleak, yet rhythmic outro: “That’s why I say f*ck the world/ Drop me off at the moon, n****/ I don’t give a f*ck what happens.”

“Rags2Riches” is a much needed and rightfully deserved anthem of celebration that brings levity to the dark, grim work of art.

Rod does not shy away from focusing on pertinent issues in our society, and he is unmatched in our current rap scene as a lyricist. He preaches about the demonization of black men in America in “5% Tints”: “I will never understand this society / First they try to murder me / then they lie to me/ product of a dying breed.”

One of the stand out tracks on the album, “Thug Life,” gives listeners a glimpse into Rod’s life before “Ghetto Gospel” altered his existence forever.

“You know I’m with the gang wrong or right / Willing to pay with my life, so I don’t make it home tonight / Bury me a gangsta,” he raps.

Rod’s focus on examining issues that are often overlooked, such as the generational cycle of violence that ensnares thousands of black men and women every day is what sets him apart. His point is made most clear with the line, “Where I come from, it’s a race to eighteen.”

“The Greatest,” the ninth song on the album, remains one the best Rod Wave singles to date because of the multitude of topics discussed within a mere 2 minutes and 20 seconds. He covers the fallacies within the American education system, explaining that he went to school for 12 years, got his diploma against all odds, only to sell donuts after graduation to make a living. He continues to explore even larger economic issues burdening America with lyrics like, “I ain’t with the minimum waging/ I ain’t with the modern day slavery”.

“Pray 4 Love” is not an album one can listen to at all times of the day; the subject matter is simply too somber and grim. However, we can all appreciate that this album does not feel like it was devised for the Hot 100 charts or to satisfy some TikTok craze, but rather was Rod divulging his own truth…. however painful it may be.