Home » Homeless people are among those most at risk for Covid-19. Here’s what these 3 brothers are doing about it

Homeless people are among those most at risk for Covid-19. Here’s what these 3 brothers are doing about it

Throughout his entire time at the University of Miami, Marc Levine has been involved in community service, from working as a Camp Kesem counselor to more recently serving as the president of Fun Day, UM’s oldest day of service dedicated toward providing a day full of events and activities for people with developmental and intellectual disabilities.

After living in Brickell for a year, Marc Levine, 22, said he would pass by members of the homeless community near his apartment constantly, and was concerned for them as coronavirus spread in Miami.

“You see it so much and you see the need to help out,” he said.

Searching for a way to help Marc and his two older brothers, Mitchell Levine, 28, and Lance Levine, 25, decided to use a unique hobby of theirs to help the vulnerable in their community during coronavirus. In early April, Miami Masks Strong was born, a non-profit organization seeking to provide protective gear to those most at risk: the homeless population and frontline workers. 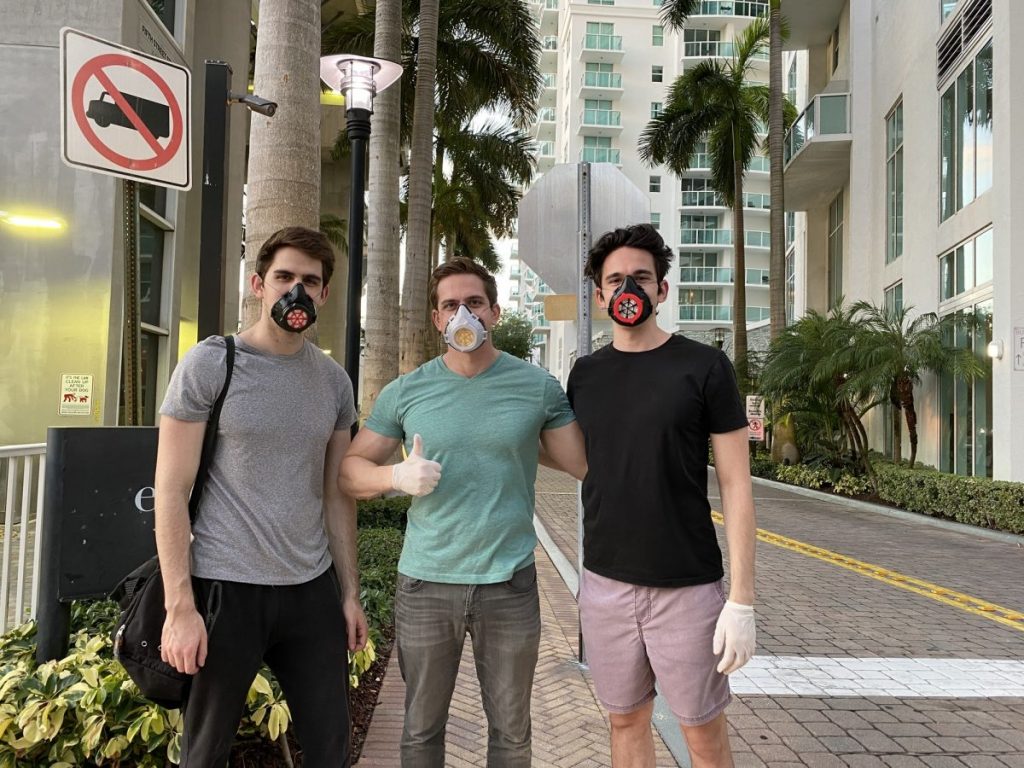 From left, Lance, Mitchell and Marc Levine make it back to their home base in Brickell after distributing another round of masks to the nearby homeless community on Sunday, May 4. Photo credit: Anna Timmons

For the Levine brothers, 3D printing was something they did for fun to make knick-knacks or fix appliances around the house. When a newly purchased shower head didn’t quite fit, Lance Levine said he quickly designed and printed a piece to help attach it.

But when the brothers saw the shortage of medical supplies, such as masks, due to the coronavirus pandemic, they began to think of ways they could use their knack for 3D printing to support their local community.

Lance and Marc Levine, the middle and youngest brother, who are both pursuing medical careers, had always wanted to think of ways to creatively use their two 3D printers for a medical purpose. Now was their chance.

Partnering with their older brother Mitchell Levine, an attorney in Fort Lauderdale, the Levines made a plan to deliver as many masks as their two 3D printers could print each week to the homeless population.

According to a report from the Miami-Dade County Homeless Trust, there are more than 3,600 reported people experiencing homelessness in Miami-Dade County, and of them, more than 1,000 live on the streets with no shelter. The Centers for Disease Control and Prevention found that homeless populations in the United States may be at an added risk during this pandemic. While these groups aren’t as confined and are able to more easily social distance, they also lack access to readily available sanitation facilities or are unaware about health care resources available to them. 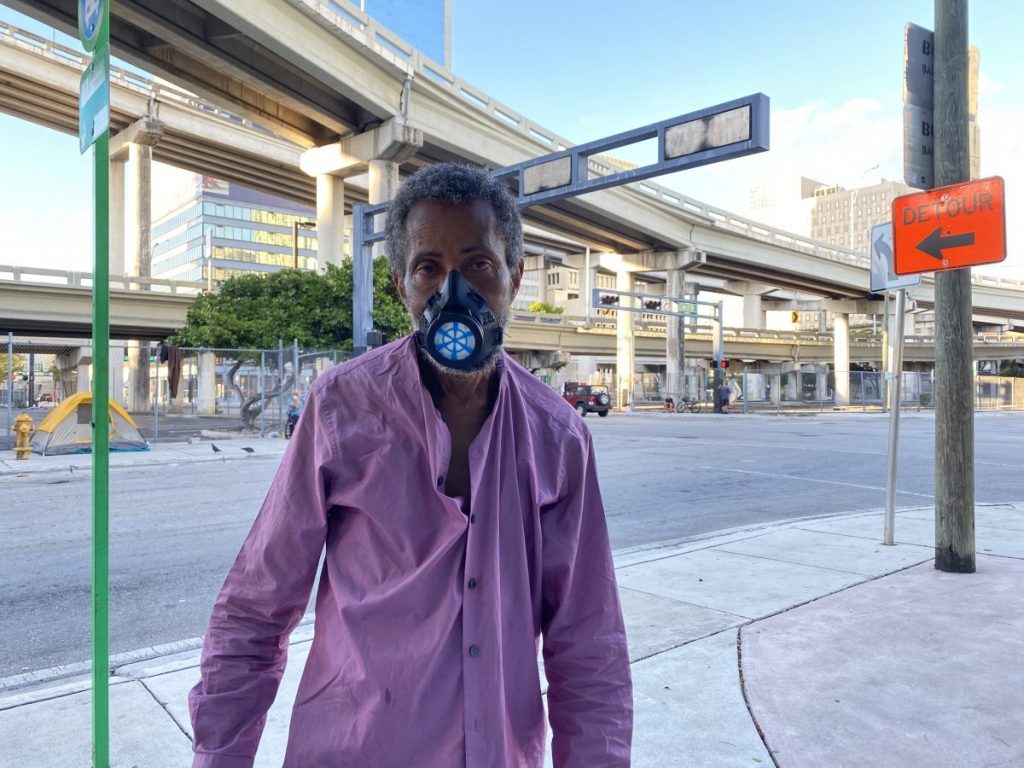 A short walk away from their Brickell apartment, the Levine brothers distributed masks on Sunday, May 4. Photo credit: Anna Timmons

The brothers wanted to help so that no one would be left behind during this pandemic, Mitchell Levine said.

When it came to creating Miami Strong Masks, Marc Levine continued to lead the way, his brothers said.

“Marc is really the one that launched this whole thing, and the one that keeps pushing us to upgrade and improve and expand the scope, rather than just resting on our laurels after we distribute a few,” Mitchell Levine continued, proud of his younger brother.

“Our idea to get involved was that we saw homeless people in the community that were not only unprotected from the virus, but also were unable to get food and supplies from stores that have implemented mandatory facewear policies,” Mitchell Levine continued.

On April 9, a Miami-Dade County order mandating masks in public spaces went into effect. Mitchell Levine said Miami Strong Masks’ goal is to ensure that this public health requirement doesn’t come in the way of homeless people getting the food and supplies they need.

The project is a Miami affair through and through. Although originally from Orlando, the brothers have strong roots in South Florida. Lance Levine graduated from the University of Miami in 2017 and now is in his third year of medical school at UM’s Miller School of Medicine, while Marc Levine, a senior majoring in neuroscience at UM, will be completing his degree this week.

For the brothers, Mitchell Levine added that Miami Strong Masks represents a movement to rally around the community.

“Communities come together in times of crisis, and we think that although the circumstances are pretty dire with the spread of COVID-19, we think it’s a perfect opportunity to show how people working together can overcome even the harshest times,” he continued.

To pay for mask supplies, the brothers started a GoFundMe, which has already raised more than $700 in donations from family and friends.

Yuval Manor, Lance Levine’s girlfriend, has seen the progression of the project since the very beginning and said she is amazed by the reception Miami Strong Masks is getting.

“Their community and their friends and family really believe in this, which I think is what is so cool that people are making large donations and they’re asking for updates,” Manor said. “They really want to feel involved because in times like this, people want to have a way to give back and they don’t know how to start.

Manor has helped in the assembly line process and has also been with them distributing masks regularly.

She jokingly calls the brothers “the three masketeers,” as they have begun to devote themselves to this project.

Other organizations, such as the Miami-Dade Homeless Trust, are also working to support the homeless community during COVID-19. The trust has been at work for weeks disseminating information on coronavirus alongside hygiene, safety and food kits to the unsheltered homeless population. The trust has identified that homeless populations in Miami are in need of 3,400 masks and is currently accepting donations of homemade masks at several locations in Miami-Dade.

Made of long-lasting plastic with replaceable vacuum filters, Miami Strong Masks, however, can be used again and again, for as long as they are needed, Lance Levine said.

“It should last for a while on its own, but one of the plans is that later on we will distribute the filters with the masks so they can replace it themselves,” Lance Levine said.

Click here to learn how the masks are made.

The team is currently on its third mask design after taking feedback from some of those they had distributed to. But rather than just print the masks and hand them out, the Levine brothers have also uploaded their 3D design online so that anyone in the world can make their own and distribute. 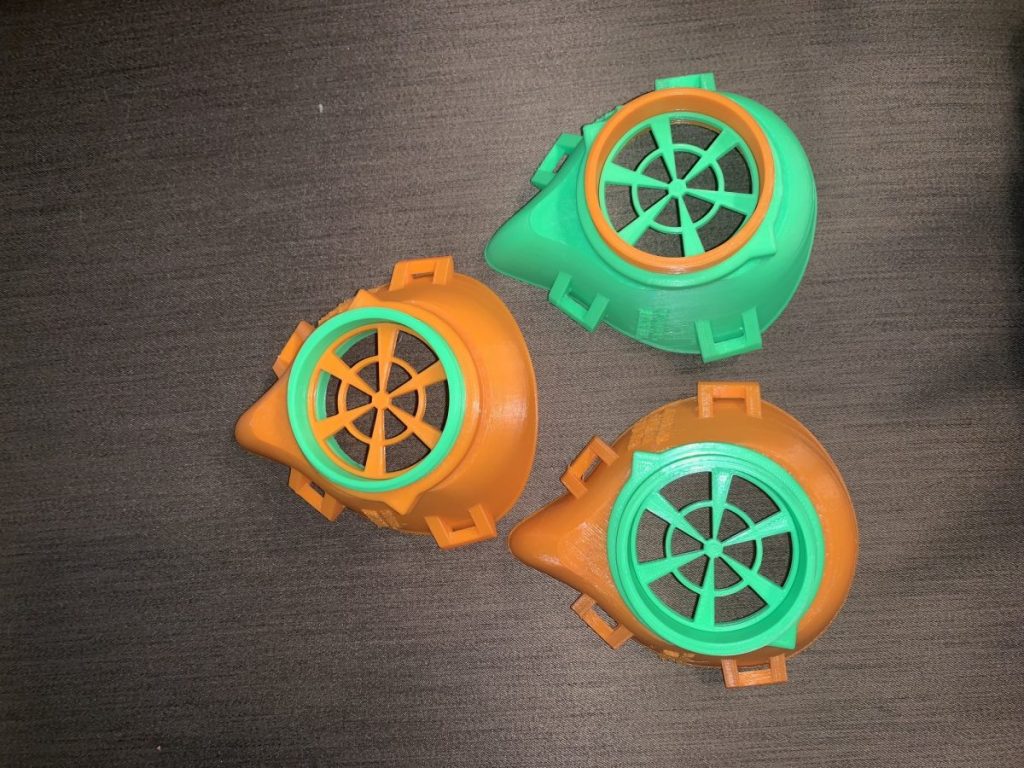 In the next phase of Miami Strong Masks, Lance Levine said they will begin to donate to UM’s Jackson Memorial Hospital. On Thursday, May 7, the brothers will be dropping off 30 masks to the Gordon Research Center, one of UM’s medical centers, to be used by healthcare workers. In true UM fashion, these masks will be entirely orange and green to show extra support for UM’s hospital workers, Marc Levine said.

Lance Levine added that the team is planning to give out hygienic products and hopes to partner with a local homeless organization such as Camillus House.

During a typical weekend distribution, the brothers meet up in Brickell and then walk just a few blocks north to Overtown where they’re greeted by members of the homeless community that have come to know them as the guys that bring masks each week. Word of mouth has spread quickly, and they’ll often attract many to come up to them. During their most recent trip on May 4, the 25 masks they had brought with them disappeared within minutes. 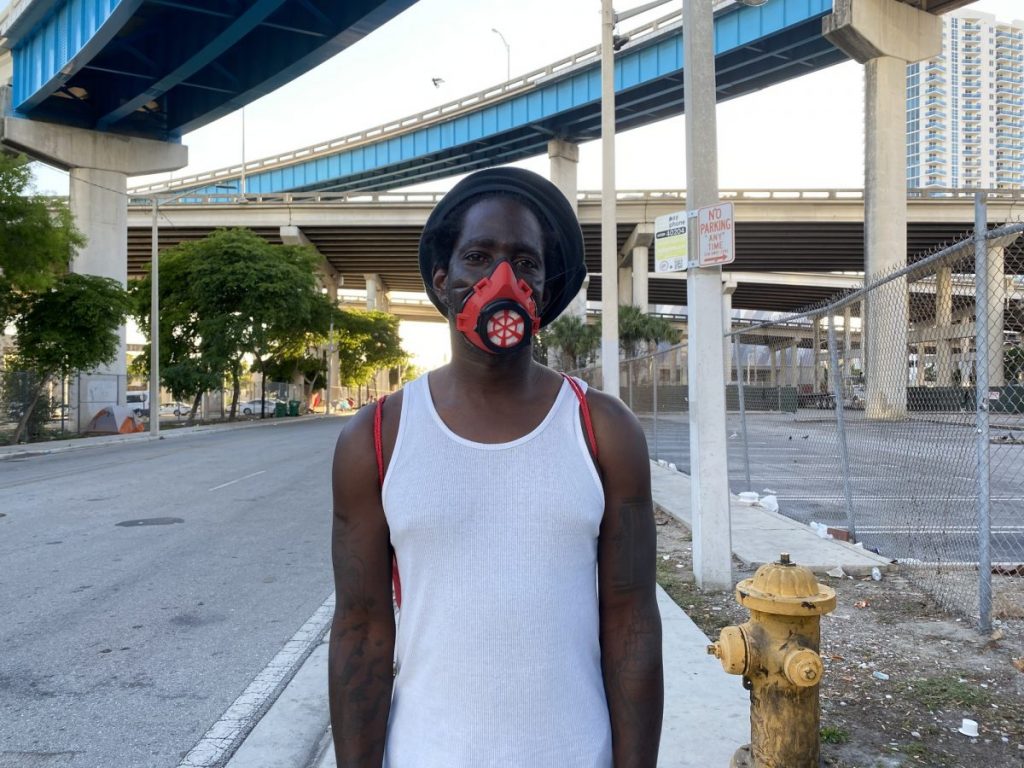 One man wears a red Miami Strong mask he received from the Levine brothers on Sunday, May 4. Photo credit: Anna Timmons

While they hand out the masks, one of the brothers will offer some cash out of their own pockets, and Lance Levine answers any questions the homeless have on COVID-19 or other health issues they may be experiencing. One of the main problems he sees through these interactions, Lance Levine said, is that so many homeless people don’t know about the resources available to them at nearby hospitals, such as at UM’s Jackson Memorial Hospital, the main hospital serving the Overtown community.

“They can get free medical care, free medication, and a lot of people don’t know that’s available,” Lance Levine said. “So this is a good opportunity to educate.”

One homeless man they passed while distributing asked them if the virus was getting better or worse. He worried about how he would survive the pandemic.

The brothers also often provide updates on the course of the pandemic, and try to deliver the most up-to-date information or CDC guidelines for social distancing and safe hygienic practices to the homeless people they distribute to. 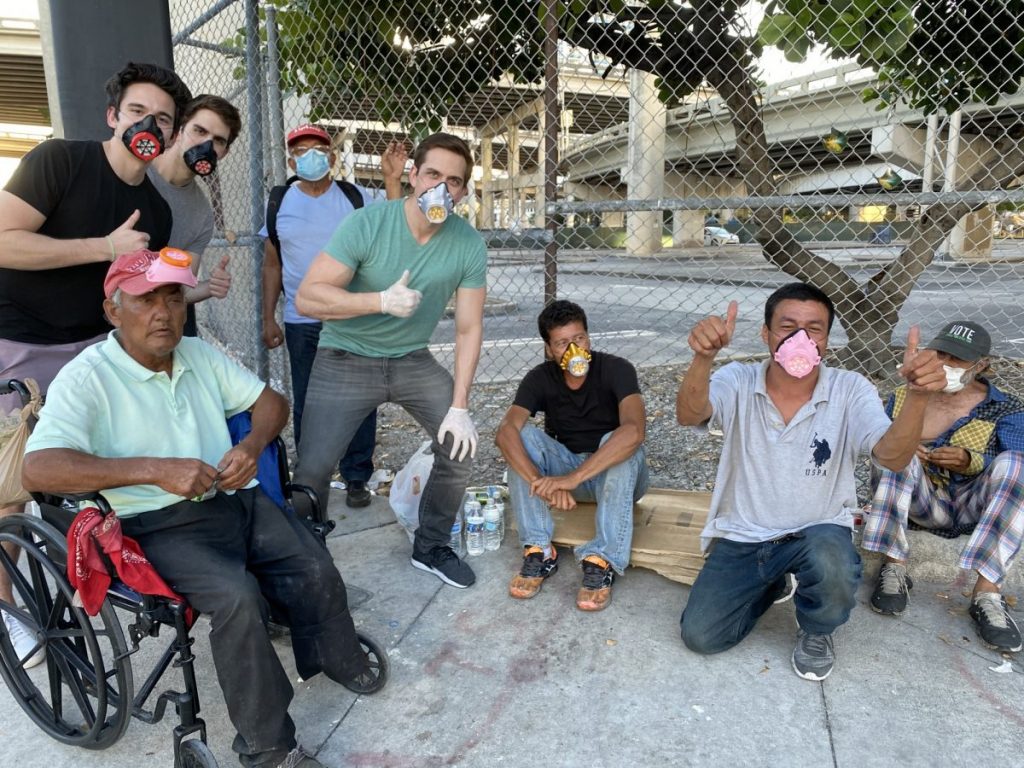 The Levine brothers pose alongside others wearing their masks during distribution on Sunday, May 4. Photo credit: Anna Timmons

The reception from the homeless so far has been overwhelmingly positive, Marc Levine said. One of the homeless men said the mask will help him continue to survive.

“You have to have a mask to go everywhere. This makes a big difference,” he said.

Another raved about the mask, stating in Spanish, “This mask is better than any other mask. 100 percent amazing.”

A group of brothers living together on the streets of Overtown said they were grateful to the Levine brothers for taking time to help them. One of the three wasn’t able to get a mask during the most recent distribution, but Mitchell Levine promised him they would all be back within a few days to bring him one.

Click here to donate to Miami Strong Masks or learn more about their story.