Update, April 30, 5:30 p.m.: The University of Miami released an updated statement Thursday, adding that Zhang resigned from his position. Click here to download the full statement.

Update, April 30, 8:25 p.m.: The university further clarified that Zhang was formerly employed as a lecturer and not a professor.

A University of Miami instructor was teaching a business analytics class over Zoom and sharing his screen when students spotted something unexpected– a pornographic bookmark tab describing college girls. Videos, photos and social media posts capturing the incident soon went viral, and the lecturer, John Peng Zhang, is no longer employed at UM.

The chain of events began on March 26 when a student left his microphone on during a business analytics Zoom class. He noticed a bookmarked tab on the professor’s screen that read “Busty College girl fu…”, and he pointed out the tab for the whole class to hear. With this, much of the class soon took notice, aside from the professor. Zhang continued teaching the class as normal, while the students quickly snapped photos and videos of the incident.

By the end of the class session, videos of Zhang’s screen started to spread on social media, notably first on TikTok. By the time Zhang’s next class started, many of the students had already seen the eight-second video which zoomed in on Zhang as he talked and then panned over to the bookmark, above it a miami.edu website URL. The bookmark remained for another session that evening giving students more of an opportunity to spread it on social media. 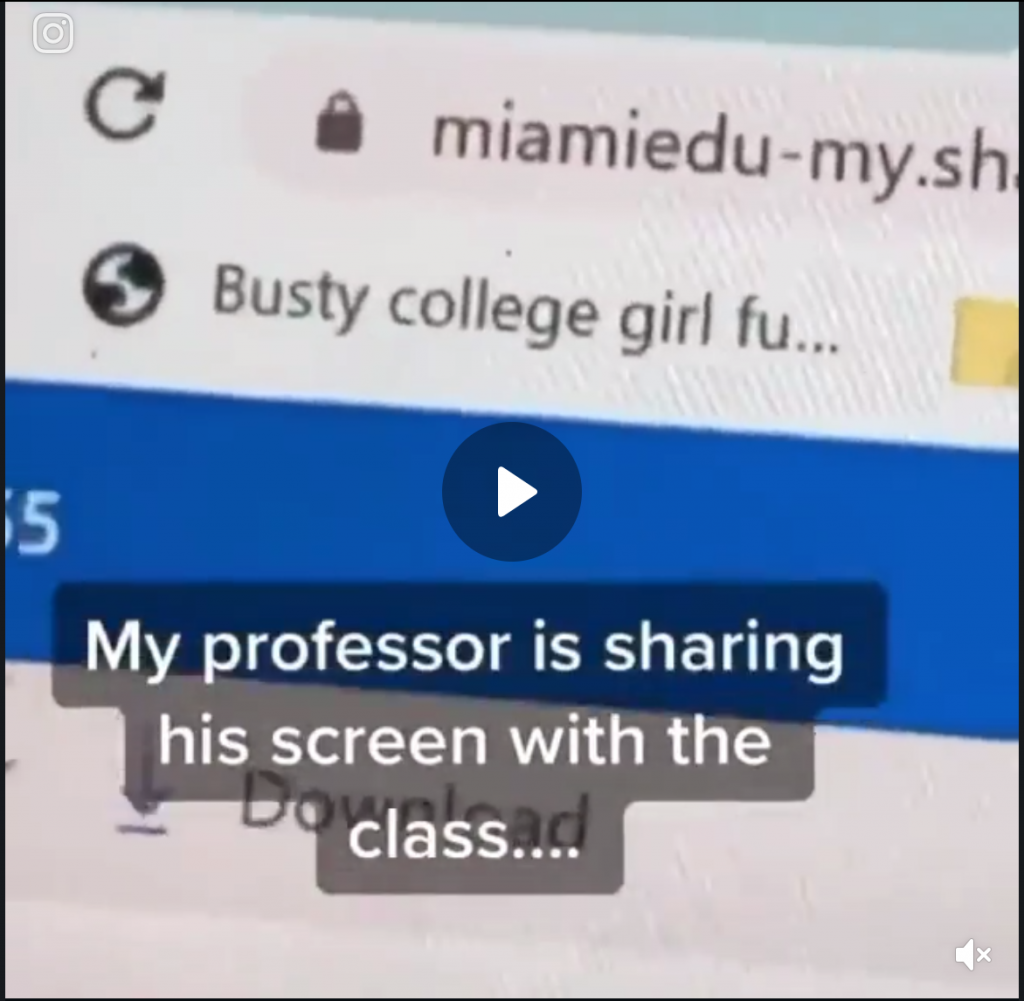 A TikTok posted by a UM student highlights a professor’s pornographic bookmark tab spotted while he was sharing his screen during a Zoom class on March 26th. Photo credit: iFunny

“It was insane…it blew up,” said freshman business law major Samantha Hill, a student in one of Zhang’s classes.

The original TikTok video garnered more than 800,000 views in a handful of hours. Multiple students in different sessions of Zhang’s class said the TikTok video was the first time they saw the link and their professor online. Within 24 hours screenshots and recordings of the TikTok had been spread to notable Instagram pages including Fifthyear, Barstool and others, reaching millions of followers.

“I had friends sharing it with me from other schools who saw it,” said Ethan Hartz, a freshman business student who was in the business analytics class when attention was first brought to the bookmark.

Despite the original TikTok being deleted, it can still be found online and screengrabs remain on several different social media pages.

Zhang addressed the incident with his class the following session.

“I don’t know how it happened,” he said. “I didn’t see it, I’m pretty sure everybody else did…My apologies to the class.”

Zhang then sent out an email to the class saying he was “investigating” the matter and encouraging students not to share images of the link. Calls from The Miami Hurricane to Zhang requesting comment for this article were not returned.

At least one more session was held normally, for some classes two. But eventually, when class time came around again, Zhang did not reappear, leaving students in an online class session alone. Students remained in the Zoom session alone for approximately 20 minutes until they received an email from the business analytics department chair Robert Plant informing them class was cancelled. This would be the only communication students would receive from administration. Both Plant and Ann Olazabal, the vice dean for undergraduate business education, declined to comment.

“I was concerned something had happened,” Hartz said. Multiple students expressed similar feelings.

With no communication from administration and a professor not appearing in the midst of a pandemic, students were left worrying something bad had happened. Several admitted they thought he may have fallen sick, or worse. A day later after the vague email, the instructors of the courses were changed to Gery Perez and Maikel Espinosa. They both uploaded new syllabi and changed the class from Zoom to Blackboard Ultra with little notice. Neither of the instructors returned emails requesting for comment.

As the course changes took place, students began to consider the gravity of the situation.

“[My] first thought was this is super funny,” Hartz said. His feelings were similar to that of several of his peers, first laughter then deeper feelings. Soon they began to realize the potential implications of the video being everywhere and the power of the internet. “I felt guilty afterwards for even sharing it with my close friends,” he said.

“I felt bad about the attention it was getting,” he said. He deleted his post after he realized how active it was. Expressing remorse over many of the comments aimed towards Zhang on various online pages, he continued, “I didn’t want him to lose his job…I thought he would be fine…I felt really bad for him.”

Some students never found it funny and saw danger in the video immediately. Jade Johnson, a junior marketing major in Zhang’s class, told her classmates to stop posting it as soon as she found out.

“This is someone’s livelihood,” she said. Johnson immediately saw the potential implications of the video being so broadly watched and knew his job could be at risk. “I told my friends, this guy could lose his job.”

Johnson was correct. Zhang has been removed from the school website, his email is no longer active and his classes this semester in the course catalogue have been changed to reflect their new instructors. His name has been expunged from all UM affiliated websites. UM confirmed Zhang is no longer employed by the university.

Johnson explained that earlier in the semester when she was experiencing personal problems, Zhang was the most caring of all her professors and said he seemed sincere.

“He was one of my only professors who seemed to care,” she said. Johnson also said she felt Zhang didn’t deserve to lose his job.

“I think firing him is a little extreme…He didn’t do anything illegal,” she said.

One of the issues raised with students was the specifics of the pornographic bookmark, mainly that it was related to a college student.

“It was the fact he is a college professor and saved a video to his bookmarks describing college girls,” Hill said. “A video to watch over and over again.”

Hill isn’t alone– other female students expressed discomfort over the bookmark. They said that for female students, it could be hard to have future discussions with him without thinking about it.

“It’s hard not to think he’s looking at you like that,” she said. “I wouldn’t turn my camera on…I don’t want him to look at me.”

Despite differing views on the proper punishment for the incident, several students in Zhang’s classes expressed a similar dissatisfaction with how the matter was handled and communication from administration.

“We heard absolutely nothing from the school,” Hill said. This left students wondering what was a rumor and what was true. Although a couple classes received an email from Plant about cancelled class, Hill said her class received no such email.

Students received an email from the department chair responsible for the business analytics class, Robert Plant, in the middle of their normal class time informing them class had been cancelled. No future updates were provided on Zhang's termination to students. Photo credit: Jesse Lieberman

Even students that did receive the email said they would have appreciated more closure.

“The email was super vague,” Hartz said. “I wish they had just said what happened in it.”

The student who posted the TikTok was contacted by administration and asked to take it down. Several students said they were never contacted or reached out to discuss what happened during the Zoom incident.

Johnson felt as though reaching out to students about what happened during class would have been beneficial.

“They could have just done a simple questionnaire and asked us what happened,” she said.

Questions addressing these concerns were emailed to Olazabal. She declined to comment.

As new professors took over Zhang’s workload, they proceeded to delete the syllabuses that had been in place for the entire semester and upload their own. Some of which had no grading rubric listed and referenced different textbooks. Students also lost access to all the previous resources Zhang had provided via his personal website. Hill said when she reached out to her new professors expressing some of these concerns, she was simply instructed not to worry about grades. She expressed frustration over a project being graded by professors who didn’t assign it or develop the rubric for it.

“I’m frustrated with the fact there has been no guidance from the school or the department,” Hill said. “It’s really not our fault and I feel like we are being thrown under the bus.”

In response to questions about the incident, the university provided this statement: “The University of Miami aggressively investigates all complaints of inappropriate behavior or sexual harassment. After receiving a complaint through the University’s ethics hotline, the incident was investigated by the Office of the Provost, Title IX investigator and Miami Herbert Business School.” No further comments were provided.

Through the eyes of an apprentice: COVID-19 and the medical student experienc
It’s only right to fall in love twice