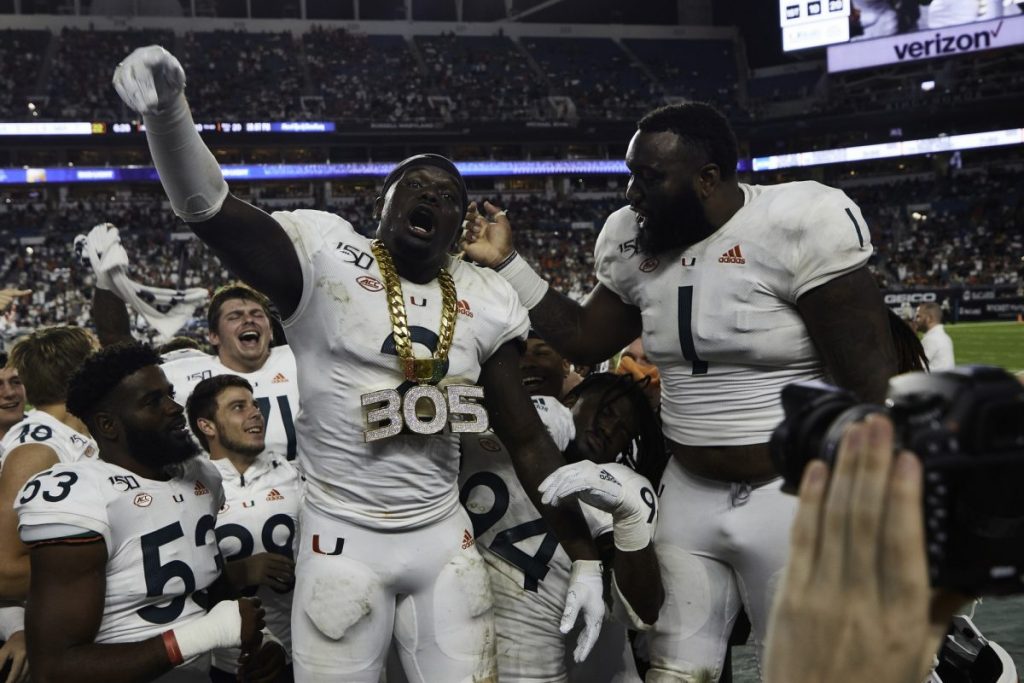 Cornerback Trajan Bandy was one of the former Hurricanes not selected during the draft process. After a solid three-year career with the Hurricanes, Bandy passed on his senior season in Coral Gables to go the professional route while citing family concerns.

And while his name wasn’t called at all in the draft, he’ll get a shot at making an NFL roster, signing with the Pittsburgh Steelers as an undrafted free agent.

Bandy led UM in passes broken up in 2019 with eight and earned All-ACC Honorable Mention honors, his second consecutive season with conference accolades. Arguably his best individual performance came on Oct. 11, when he collected six total tackles as well as a sack and a fumble recovery in a win over Virginia. His outing against the eventual ACC Coastal Division champion would earn him conference defensive back of the week honors.

He had been projected as a seventh-round selection or as an undrafted free agent. The 5-9 defensive back was an All-ACC third teamer as a sophomore, made 29 total tackles as a junior,and most famously returned an interception for a touchdown late in the first half of the 41-8 win over Notre Dame as a freshman.

Fellow defensive back Romeo Finley also signed a free agent contract, getting picked up by the Los Angeles Rams after the draft. Playing the striker position during his four years in the program, Finley made 12 starts as a senior in 2019 and made 54 total tackles.

Linebacker Michael Pinckney was perhaps the biggest snub of the weekend, falling out of the draft completely after being pegged as a 4-7th round pick. As of Sunday, he has also yet to be signed an undrafted free agent.

“Y’all take it easy. Coulda been signed with a team. imma get back healthy then we gone make a comeback…the team got a plan @Day1SportsEnt,” Pinckney tweeted.

He wasn’t drafted in spite of being a starter all four years with the program alongside Quarterman, who was a fourth round selection. The linebacker totaled 64 tackles as a senior, including 12.5 for loss and five sacks.

As a junior, the Jacksonville native logged 74 total tackles while notching a key interception in the come-from-behind win over Florida State. Pinckney was an All-ACC Honorable Mention as a sophomore and junior before earning All-Conference Second Team honors his senior year. 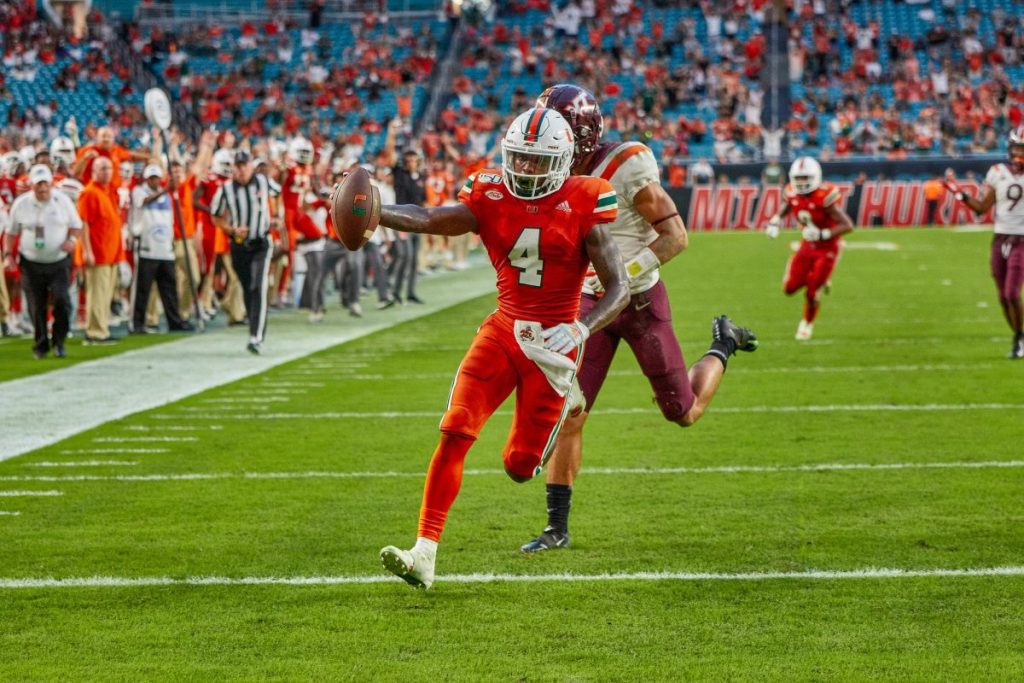 Wide receiver Jeff Thomas’ raw talent didn’t initially appear to be enough to earn him a shot in the league either. The East St. Louis, Ill. native spent three seasons in South Florida, who like Bandy, choose to go pro rather than return for his final season of eligibility.

However, he signed with the New England Patriots Sunday. Thomas had a somewhat turbulent tenure at UM, dropping his draft stock into the third day range in spite of flashes of brilliance displayed in his three years in orange and green. He severed a two-game suspension in 2019 for a violation of team rules, missing contests against Georgia Tech and Pittsburgh. A year prior, a disgruntled Thomas was removed from the program by former head coach Mark Richt prior to the regular season finale vs. Pitt, only to return to the team in the ’19 offseason after Manny Diaz ascended to the head coaching job.

In spite of the background noise, Thomas proved that his talent could be an asset over his three collegiate seasons. He caught 31 passes for 379 yards and three touchdowns, including two scores in a home loss to Virginia Tech and a 39-yard snag in a one-sided win at Florida State. The 5-10 wideout also averaged over 22 yards per kick return over 12 attempts as a junior. 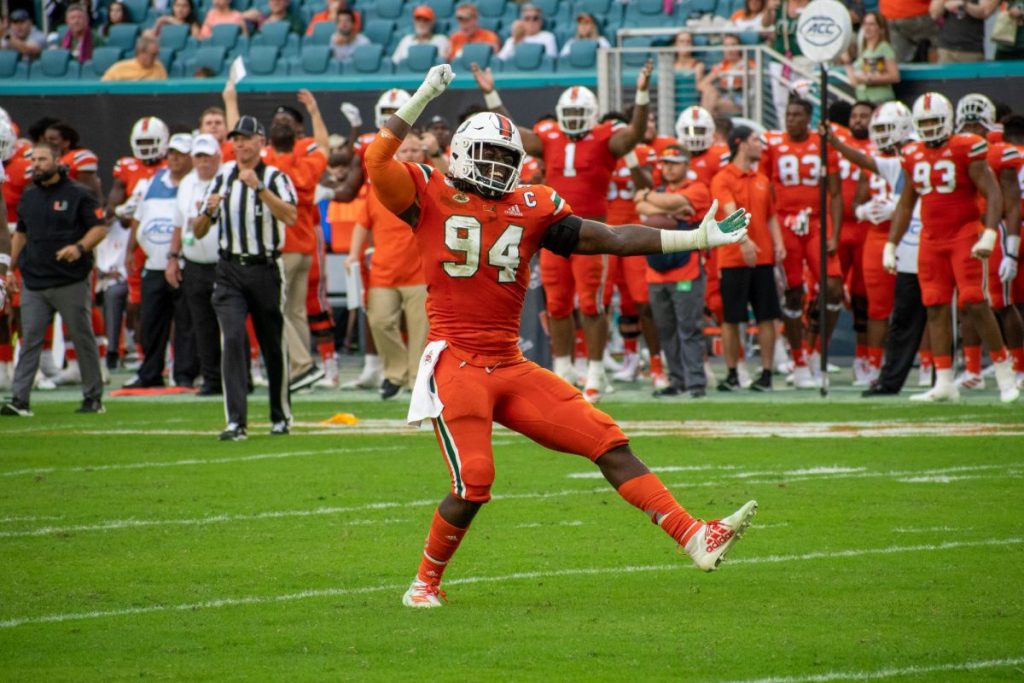 Defensive end Trevon Hill was yet another prospect to slip, after a lone productive year in Miami as a graduate transfer from Virginia Tech. A rotational piece in Blake Baker’s defense, the Virginia Beach native made only one start but played in all but one contest in 2019. He made 27 tackles along with nine and a half of them for a loss as well as four and a half sacks. Hill will join Thomas in New England, after signing with the Pats on Sunday as well.

As of Sunday afternoon, this weekend’s signings mean that eight Canes have earned a coveted NFL contract, with all that remains to be determined is Pinckney’s fate.

Crossword: April 26 – May 2
I had the coronavirus, and trust me, you don’t want this