The University of Miami announced a move to online learning environments for the remainder of the semester, but the administration has yet to clarify how students will be graded given these unusual circumstances.

Senior Anuj Shah is hoping that UM will allow students to take classes pass/fail. He felt so strongly about this that he created Change.org petition March 17 calling on UM to make this grading system an option for students whose studies have been disrupted by the coronavirus. 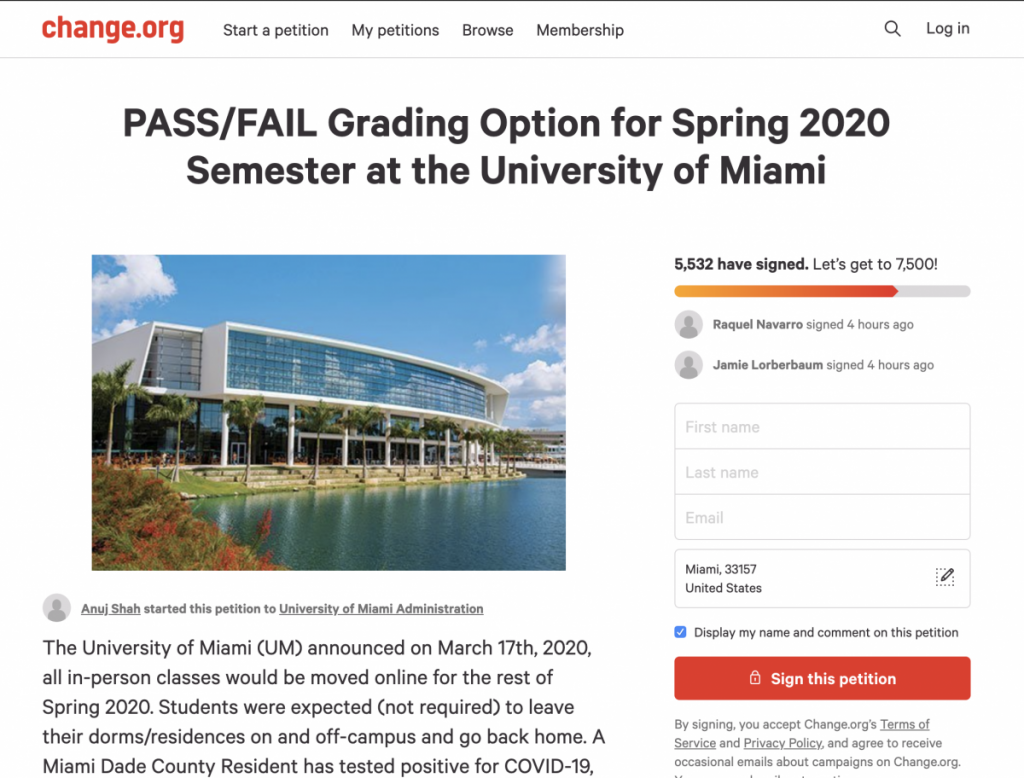 UM student Anuj Shah created a Change.org petition to call on the administration to implement a pass/fail grading option for the spring 2020 semester. Photo credit: Change.org

And it seems that Shah is not alone in his feelings. In just a few days, the petition received more than 5,500 signatures. That’s more than half of UM’s undergraduate student body.

“The home environment is very different for students than being on campus,” Shah said. “We do not know if every student will be able to have access to a quality internet connection or a computer at home in order to take part in online classes. If someone in a student’s home gets sick, the last thing they will be thinking about is academics.”

Shah came across a similar petition floating around the University of Florida community and thought many of the points he read were valid. Following the petition, UF officially implemented an opt-in pass/fail grading system, which Shah said he hopes UM implements as well.

Several other universities around the country are also implementing a pass/fail grading system, such as Columbia, Duke, Massachusetts Institute of Technology and Vanderbilt.

“Students who took specific classes this semester with the aim to boost their GPAs for graduate school applications don’t want their GPAs to stagnate because of a pass/fail grading system, but also those students who may be experiencing high stress situations as a result of COVID-19 should not be punished for a situation that is out of their control,” said Shah.

As cases of the coronavirus continue to rise in the United States and around the world, Shah said that many students may not be able to focus on school at this time. For example, he said students returning to states with high rates of infection will face the stress of being in unsafe environments. On top of this, students in different time zones could have classes at odd times of the early morning or late night.

Shah also pointed out that online classes are not comparable to in-person learning and are particularly difficult for those students who have labs, art classes or music classes.

What are Canes saying about the petition?

The petition was quickly shared among students over Facebook and through group chats, garnering more than 5,000 signatures in just two days. Several students share the same concerns as Shah over carrying out the spring semester online amid a global pandemic.

Tyler Metzler, a junior advertising management major, agrees that classes should be made pass/fail, as he is unsure how feasible it will be to complete his current coursework under these conditions.

“As an advertising management major, I am involved in several semester-long group projects with students from all over the world,” he said. “How will we be able to communicate and coordinate projects when we span five or more different time zones?”

Sophomore Delphine Djomo also expressed concern about the transition to online as many students left their textbooks, notes and laptops in their dorms and are unable to retrieve them due to the latest housing restrictions. Housing and Residential Life informed students March 19 that residents will not be able to return to the residential colleges after March 25 to pack up their things.

HRL said this was done in order to protect both students and staff who are still on campus.

“Students’ belongings will remain secure in their rooms and our residential areas will remain closed until we have received an ‘all clear’ from health officials, which may be several weeks away. At that time, we will facilitate the opportunity for students to come and claim their belongings,” HRL stated.

However, until that time, students will have to continue to complete online classes even though many lack the materials needed to do so.

“Incorporating a pass/fail option is necessary to mitigate these issues and not penalize students for the rapid, unpredictable transitions in their academic and personal lives that might really stifle their academic potential,” Djomo said. “It’s bad enough that so many aspects of our lives at UM have been wiped away; let’s not add more stress by holding students to the same academic standards in an unprecedented situation.”

Dorian Martin, a freshman entrepreneurship and finance major, said she is hoping for leniency in her classes this semester.

“Personally, I can’t learn online and this will probably mess up my GPA,” said Martin, who agrees there should be pass/fail grading option.

Sophomore Sharon Beriro said she’s glad that students are speaking up because she believes current conditions could lead to poor academic performance.

“It’s enough that we’re under academic and professional stress on regular conditions, but worrying about a range of issues such as personal and family finances, health concerns, social concerns and even political concerns add on a whole new toll for student life,” said Beriro, a political science and art history major.

While this was not a part of the petition, Metzler said he is also concerned about the amount of money his family is paying for tuition that is being used for online classes.

“My grandparents pay for my undergraduate education, and when they decided to do that, they and myself were expecting I’d actually be getting an in person education of some substantial quality,” he said, calling for a partial reimbursement of tuition.

What is the administration saying about the petition?

Executive Vice President and Provost Jeffrey Duerk has seen the petition and said it is wonderful that students sharing their thoughts. However, Duerk said implementing a pass/fail grading system is complicated.

“A comprehensive all-encompassing approach may seem best to some and it may inadvertently penalize others,” Duerk said, noting that several students have emailed him requesting that UM continue with the standard grading system. “Students wishing to continue to build their GPA to get to graduate, medical or law school may feel penalized, as might those trying to move off of academic probation.”

In an effort to take some burden off students, the university extended the date to withdraw from a course to April 10.

Duerk said that the administration is awaiting feedback from the faculty senate, which is scheduled to meet via Zoom March 25. The administration plans to announce a decision within a week from that meeting, Duerk said.

Crossword answers: March 23 – March 28
No gym, no problem: Working out when you can’t leave home

A group of University of Miami students take a deep dive through film, photography, and journalism i