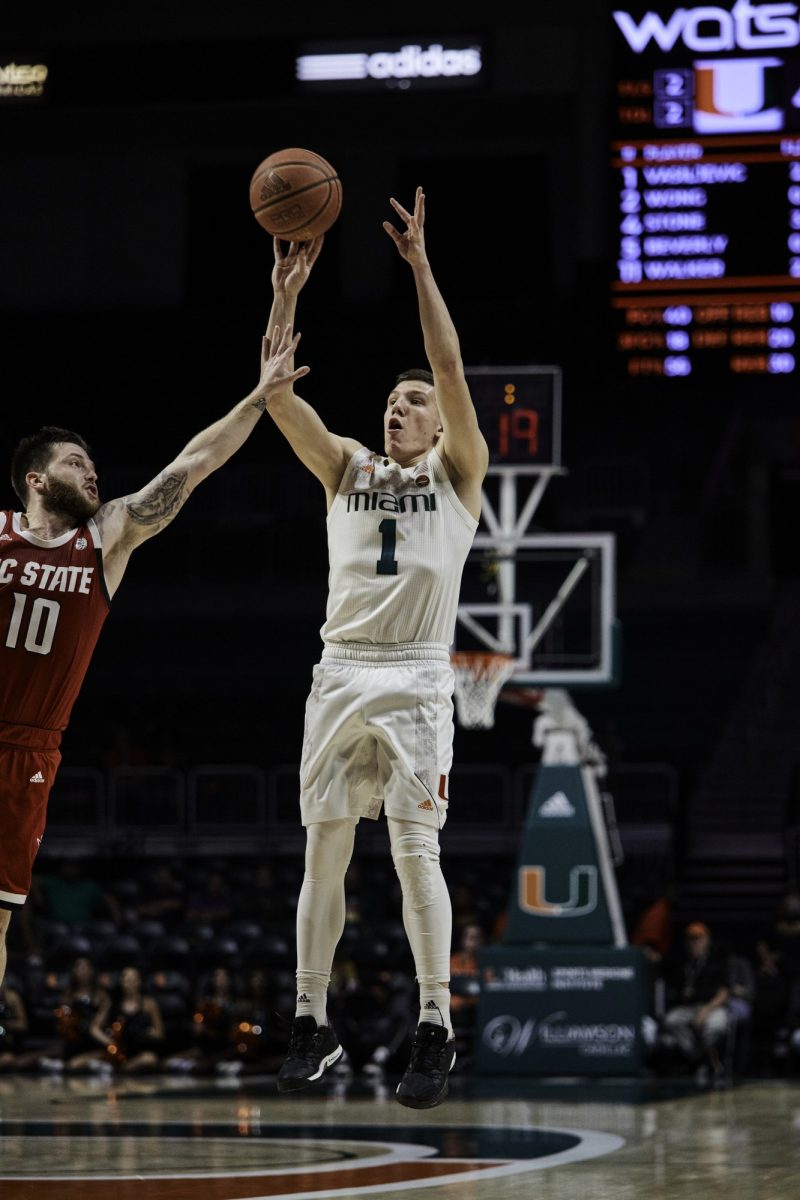 After 40 minutes of play, seven lead changes, 10 tied scores and a four-point lead with 16 seconds left in regulation, the Miami Hurricanes needed an extra five minutes of overtime play before they said goodbye to the Watsco Center this season.

In the last regular season game, Miami, without leading scorer Chris Lykes, defeated the Syracuse Orange 69-65 Saturday afternoon. Lykes was taken to the hospital after Miami’s game against Virginia on March 4 with injuries to his face.

Miami senior DJ Vasiljevic and redshirt senior Keith Stone were both honored as the team’s only two senior before tip-off. Both players played a big part in the win.

Vasiljevic scored 14 of his 17 points in the second half for the Canes. Stone led Miami with a career-high six assists.

“I was just very happy for Keith Stone and especially DJ, who’s provided our fans, our coaches staff and his teammates,” Larrañaga said. “Just a great guy to be with on and off the court. I was just very happy he was able to play so well and help us win in overtime today.”

Miami led 26-24 at halftime after a close first-half that saw both teams struggle to find their shot. The Orange were held to just 35.7 percent shooting from the field and 2 of 13 shooting from three-point range, but the Canes also had a hard time dealing with Syracuse’s 2-3 zone. Miami shot just 33.3 percent from the field and hit just two of its 12 three-point attempts.

Syracuse forward and ACC leading scorer Elijah Hughes had eight points on 3-of-9 shooting in the first half for the Orange but did play at all in the second half. Syracuse head coach Jim Boeheim said Hughes got hit in the head by a teammates knee.

The Orange started the second half just fine without their leading scorer and went on a 15-7 run in the first 10 minutes to take a 39-33 lead, which forced Miami to take a timeout and bringing the larger number of Orange fans in attendances to their feet to the chant of “let’s go Orange.”

Not wanting Syracuse to rain of his senior night parade, Vasiljevic hit back-to-back three-pointers coming out the timeout to tie the game at 39 with seven minutes left to play.

“You should have heard my coaches on the sideline. While the game is going on my coaches are saying to me “we just need to get the ball to DJ and let him shoot every shot,” Larrañaga said. “So, at the timeout, we run a play for him and he buried the shot, then we ran another play for him. He buried the shot.”

It was a back and forth battle from there as both teams took turns making clutch shots down the stretch. With the score tied at 52 and 1 minute to play, Stone found a cutting Sam Waardenburg for a dunk to put the Canes up by two.

Moments later a pair of clutch free throws by Isaiah Wong seem to all but end at the game as Miami went up by four with 16 seconds left.

But after a quick lay-up by Joseph Girard cut the lead to two, the Orange fouled Waardenburg, who went to the free-throw line and missed the front end of a one and one. Syracuse grabbed the missed free throw and gave it to Girard as he raced from free throw line to free-throw line and hit a pull up jumper over Vasiljevic with only 1 second left, sending the game to overtime.

Wong got the Canes going to start the overtime, scoring five points in the first two minutes. Syracuse cut the lead to three but Stone broke free for a fast-break dunk that put the Canes back up five with 28 seconds left. Clutch free throwing shooting from Vasiljevic and Kameron McGusty helped Miami seal the win, 69-65.

“I mean a little emotional, I’m not going to lie,” Vasiljevic said about making the game-winning free throws. “But for me to get on that free throw line and score the last point, means a lot. I trust in myself, I put in the work and I wanted everyone to know the game was over.”

With the regular season now over Miami will head to Greensboro, North Carolina for the first round of Men’s ACC Tournament, where they will face the Clemson Tigers.

“The regular season is one season, you put it behind you. The post-season, ACC tournament and beyond is like a whole another season,” Larrañaga said. “We got to rest tomorrow, fly up to Greensboro and then start preparing mentally and physically for Clemson.”

The Hurricanes will play the Clemson Tigers on Wednesday, March 11 at 12 p.m.