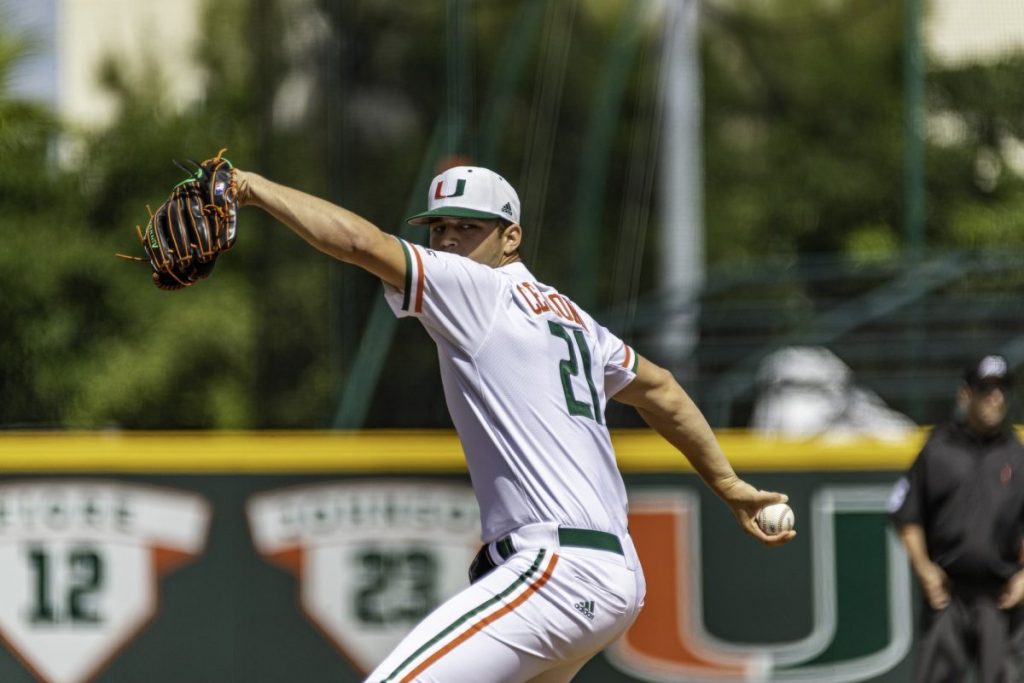 The Miami Hurricanes made it three in a row against the Pittsburgh Panthers on Sunday afternoon with a resounding 14-2 win at Mark Light Field, good for a sweep in their opening Atlantic Coast Conference series of 2020.

The Canes improve to 11-4 and 3-0 in conference on the year. They also earned a sweep in their opening conference series for the first time since 2014.

It was an afternoon where every Miami starter recorded either a hit or RBI. Jordan Lala continued his renaissance with a 3-4 afternoon along with three RBIs, while five more players had multiple base hits as the Hurricanes registered a season-high 18 hits.

Slade Cecconi went for six innings Sunday but was forced to work through 106 pitches while working out of multiple jams. The sophomore allowed two runs—one earned, six hits and two walks to go along with seven strikeouts.

Cecconi (2-1, 3.80 ERA) was relieved by a bullpen that pitched the seventh inning on, with Carson Palmquist and Spencer Bodanza finishing the win.

Matt Gilbertson started for the Panthers and pitched five innings, allowing eight hits, four runs—three earned and two walks to go along with his four strikeouts. Pitt’s bullpen allowed the remaining 10 runs that Miami used to pull away.

But concerningly, the Hurricanes did commit two errors on the afternoon, once when Gabe Rivera overthrew Raymond Gil at third base in the third inning, allowing a Panther to score. The second miscue occurred in the sixth when Alex Toral allowed a ground ball to skip past him for a Pitt single.

The Panthers opened the scoring in the second, when center fielder Jordan Anderson singled in Bryce Hulett. Nico Popa made it 2-0 in favor of the visitors when he scored on Rivera’s throwing error.

But the Canes added 14 unanswered runs to take control of the rest of the game, starting with a Lala single that scored Tony Jenkins from second. An at bat later, Anthony Vilar brought in Lala and even score himself in the same play thanks to a throwing error on

Panther catcher Nick Vera. Lala walked with the bases loaded a frame later to make it 4-2.

UM wouldn’t get on the board again until the seventh when they made it 5-2 after Raymond Gil drove in Vilar on an error. But it was Luis Tuero that put an exclamation on the inning, with a two-run single to score Toral and Gil and extending the lead to 7-2.

The Canes opened the floodgates in the eighth, scoring seven runs to make it 14-2. Lala got his third RBI of the afternoon, Del Castillo drove in a run on UM’s first triple of the season, and Miami was able to open its bench late in the game, with Mykanthony Valdez, Chad Crosbie, Chet Moore, Josh Lauck and Tyler Paige entering late.

The Hurricanes are next in action this Wednesday night at 6 p.m. when they face Central Florida in Orlando. They’ll travel to Virginia Tech next weekend for their subsequent three-game series.