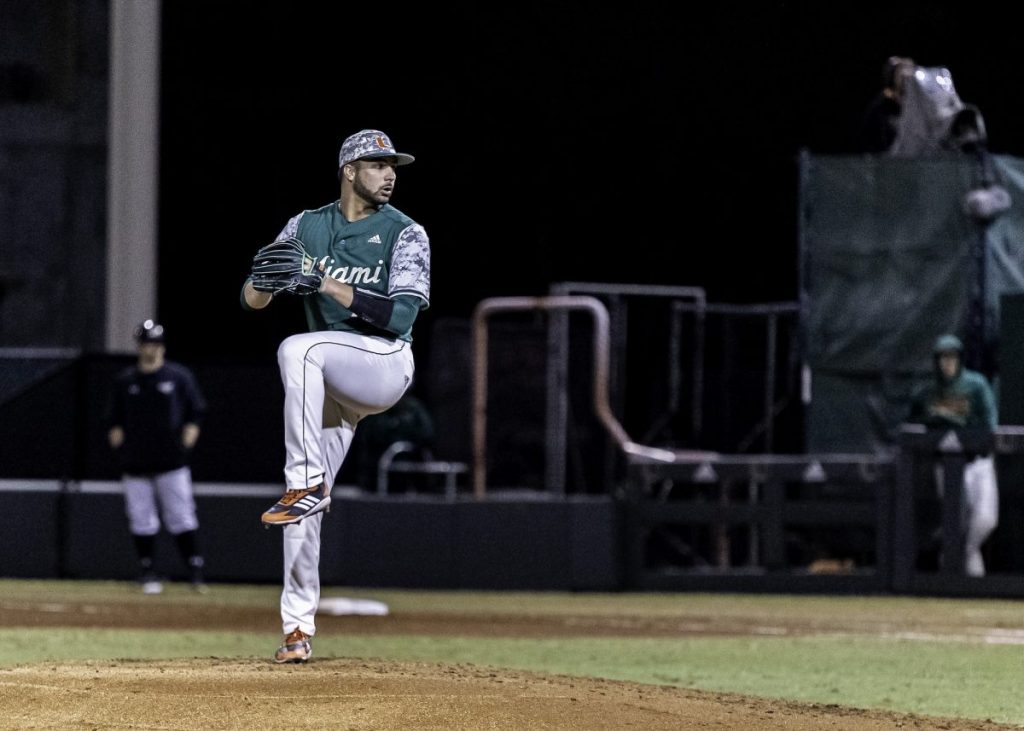 The Miami Hurricanes clinched a victory in the opening series in Atlantic Coast Conference play Saturday night, taking their second game in as many nights with a 5-0 win over the Pittsburgh Panthers behind a quality start from Chris McMahon.

Starting pitching continued show its muscle for the Hurricanes (10-4, 2-0 ACC), who now have won their opening conference series for the fifth consecutive year.

The junior right hander McMahon tossed seven innings and got credit for the win. He struck out eight batters and didn’t walk any, allowing only five hits over 98 pitches. His ran into some trouble in the early innings and allowed four baserunners in the opening two frames.

But McMahon (3-0, 1.05 ERA) then tossed four perfect innings, only having a jam in the seventh to escape before exiting the game.

Head coach Gino DiMare used his bullpen with a sizeable lead for the second game in a row, a day removed from having a 4-0 lead erased in the seventh and eighth innings.

Instead of sweating it out late however, JP Gates finished the winning effort for Miami and threw two frames to preserve the shutout.

The Panthers sent out Mitch Myers to the mound to try to equalize UM’s pitching strength, and had his moments in the game, matching McMahon’s eight strikeouts. But that was his lone positive takeaway from the evening, after the Hurricane bats drew eight hits and two walks along with five earned runs on the junior.

Miami found success at the top of the batting order, with leadoff hitter Jordan Lala going 2-4 with an RBI, Anthony Vilar going 1-4 also with an RBI, and Adrian Del Castillo going 2-3 with three RBI’s. Six of the Canes starters reached base Saturday as Lala’s batting average rose above the Mendoza line for the first time in 2020.

He opened the scoring with a double to right field in the third inning to drive home Luis Tuero, with Vilar scoring Tony Jenkins on a fielder’s choice an at bat later. A Del Castillo bloop double to left field drove in Lala to make it 3-0.

Miami added to its lead in the fifth when Del Castillo beat the shift to again double in Lala. The sophomore logged his third RBI of the night in the seventh when he scored Jenkins on a sacrifice fly to make it 5-0.