Home » From tragedy to making change: Rape survivor gives back to community, encourages others follow suit

From tragedy to making change: Rape survivor gives back to community, encourages others follow suit

She woke up that morning and put on her usual sweatpants and an oversized tank top. Still half asleep, she headed to work, where she was a nanny for two young girls and a personal assistant to their father.

As Andrews tells it, she had the best job in Toledo. She showed up when she wanted, was always greeted with coffee, mindlessly scanned documents until the girls got home from school, did homework with them until their mother returned from work, had dinner and went home.

The day started off exactly as planned. She grabbed her coffee and talked to her boss about being overwhelmed with school and life and whatever else she had going on. He left and that was it.

“The next time I saw him was when he had called me into his living room and was telling me to lay down,” Andrews recalled. “There was a pillow on the floor and lotion in his hand and, as my eyes scanned the room to figure out what was happening and my mouth spoke the words to tell him that I wasn’t going to lay on the floor, his persistency made a click in my head and made me realize what was truly happening. In that moment, I realized that I had no way out. I was trapped.”

On Sept. 18, 2018, Andrews experienced the horrific reality of millions of women and men across the country.

This reality— losing autonomy over one’s own body— is one that, for those fortunate enough to escape it, is often difficult to understand.

“You’re talking about somebody not only being violated over their choice but violated over the choice of their own body,” explained Maya Weber Hipskind, a licensed clinical social worker trained in trauma focused cognitive behavioral therapy. “You’re being forced and violated in the most private, intrinsic and individualistic way. There’s no other violation, in my opinion, that could be worse than that.”

Hipskind graduated from Barry University in 2012 and has since worked in Nashville and Miami with children and adults who’ve suffered from an array of traumas, including mental illness and sexual exploitation.

“I was completely unconscious, only waking up a few times to see and feel what was happening,” Andrews continued. “When I finally woke up and regained control, my rapist was laying his body on mine. [He] proceeded to stand and simply state, ‘Let’s get back to work,’ and that was it. He left the room and acted as nothing had just happened.”

Andrews admits she does not remember much of what followed, only noting that she chose to stay in the house because she could not imagine leaving two young girls alone with him. When she left, she picked up a friend and went straight to the hospital, where they both spent the night. 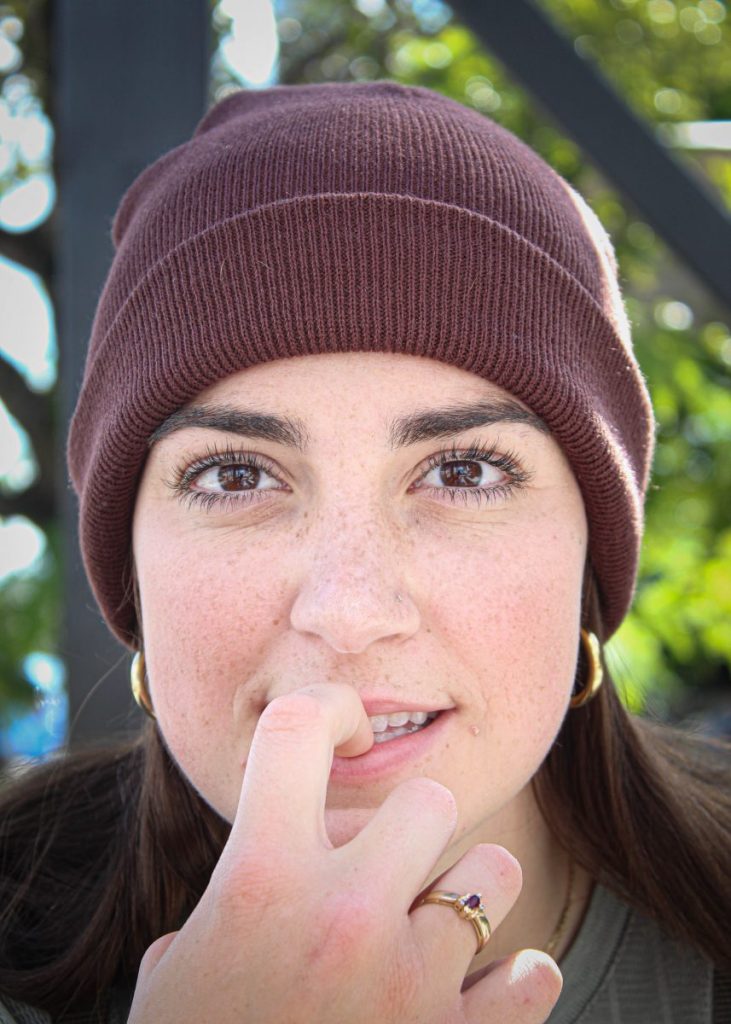 Emily Andrews, 21, moved to Miami in 2019 after being assaulted in her hometown of Toledo, Ohio. Recently wrapping up her trial and now trying to move on with her life, she has her sights set on giving back to the community that helped her in her time of need. Photo credit: Jordan Lewis

“I think getting the rape kit done and having to speak to cops right after is probably the worst part of it all,” she said. “There is no aspect of privacy or respect, for a lack of better words, for the victim.”

This criticism did not come as a shock to Hipskind, who once worked in Jackson Memorial Hospital’s rape treatment center.

“These centers are usually in hospitals,” she said. “There are doctors and nurses there who are great people and are great at what they do, but they aren’t trained very well in how to converse with somebody who’s been through an experience like that.”

Hipskind proceeded to tell the story of a former client, who went in for a rape kit and was immediately discouraged when met with the question of “Why didn’t you say no.”

“The way we say our words matters,” Hipskind said.

In May 2019, Andrews packed up and moved to Miami.

“I knew Ohio felt incredibly unsafe for me, and since Miami had been a place of safety and fun for me all throughout my childhood, it was the first place my mind decided to run to,” she said. “So that’s exactly what I did. I ran.”

A year has passed since the incident. Within that time, Andrews endured a trial which she described as less of a trial and more of a brief conversation with her prosecutor, who allegedly told her to take a plea deal.

Andrews said she experienced an immense loss of self and a constant feeling that she had done something wrong. Still, through all that, the feeling of violation she felt at the hospital still haunts her.

So when she saw a social media post about the horror of having to return home in hospital garments after enduring a rape kit, the message stuck.

“It was a concept that was so grotesque to me that a woman or man can get raped, seek help and then have to return to wherever after the exam is over in hospital garments,” she said. “What if they didn’t want people to know yet? What if they had to go back to wherever their attacker is? How would they explain their outfit? If they returned to their abuser’s home after the exam, would it result in them getting hurt again? Those are all ideas I wasn’t comfortable thinking about, and I knew I had to do whatever I could to help.”

Though what a survivor wears after leaving the hospital is seemingly insignificant to those who have never been in the situation, Hipskind explained the very real toll it may take on somebody who is already in such a vulnerable state.

“Let’s put it this way: When we get up in the morning, we put on these clothes to help protect us– whether it be from the weather, one another, whatever,” she said. “We choose those clothes and that decision is very much connected to the way that we describe who we are and to the way that we connect to the world.”

Having to wear hospital gowns can make a victim feel ostracized or as if they are the “other,” Hipskind said.

Hipskind finished by acknowledging that— while passersby are certainly not thinking anything of the sort— to a vulnerable survivor whose sensors are completely overstimulated, it can feel like the end of the world.

“Since the beginning, I knew I wanted to be an advocate for those who weren’t as fortunate as me to have a platform and support system to speak up and seek help,” she wrote on both Instagram and Twitter. “While my trial progresses, there is only so much I am allowed to do within the system. Therefore, I have decided to help outside of the system. The biggest flaw that victims face when they do choose to go to a hospital and get a rape kit done is the inadequate clothes they get sent home in.”

Andrews continued to explain how victims are stripped of what may be their favorite items and are instead sent home in hospital scrubs, postpartum underwear and those “almost comical grippy socks.”

“Because of this,” she ended, “I have decided to reach out to my many friends on all social media and collect new bras, underwear, sweatpants and shirts. Once collected, I will then take it all over to the Toledo YWCA to give back to the community that helped me so much in my time of need.”

Sept. 18, 2018, Andrews’ then boss tried to make a victim of her. Since then, she has learned that she is not a victim nor a survivor, but a fighter.

According to the Rape, Abuse & Incest National Network, one American is sexually assaulted every 73 seconds. But, according to the National Sexual Violence Resource Center, 63 percent of these attacks will go unreported.

For people like her who are forced to become nothing more than a “rogue statistic” as she called it, Andrews has a message:

“You voice matters. Speaking up matters. Being an advocate for those who don’t have the resources or support system to speak up matters…There is a clear change that needs to happen within the system, but the change can’t start until we start fighting against what’s wrong. Make your story matter.”

“It is so often that men or women or young kids go through this experience and, not only is the choice of their body taken away, but so is their voice,” she says. “Get the help you need in order to tell your story to begin with. Then, never stop telling it.”

While Andrews’ efforts are mostly focused on giving back to the Toledo community that helped her in her time of need, she says that others— whether in Toledo, Miami or other cities across the country— do not need a specific initiative to help.

“If you see an area that needs help, help,” she said. “If you want to do something similar, call up the local hospitals, the local shelters, the police department whomever and simply ask what they need. It’s as simple as that.”

University of Miami staff and students who fall victim to sexual misconduct can get a rape kit done at Student Health Services. Those who wish to seek administrative help can contact Title IX Investigator Dean Raquel McDowell— who personally works with each student to find a solution that works— at rxm1408@miami.edu. Those seeking police intervention should contact UMPD.

SpectrUM’s DragOut lights up campus with glamour, pride
Are you a top, bottom or verse?