If anything can be said about animation in the 21st century, it is that the evolutionary art form has exploded into a rich expanse of emotion, representation and nostalgia that has shaped a generation far differently than any before. On Thursday, Feb. 17, Carlos Felipe León– Shading Art Director of the upcoming film “Onward”– discussed the secret to unlocking artistic expression at the University of Miami School of Communication. 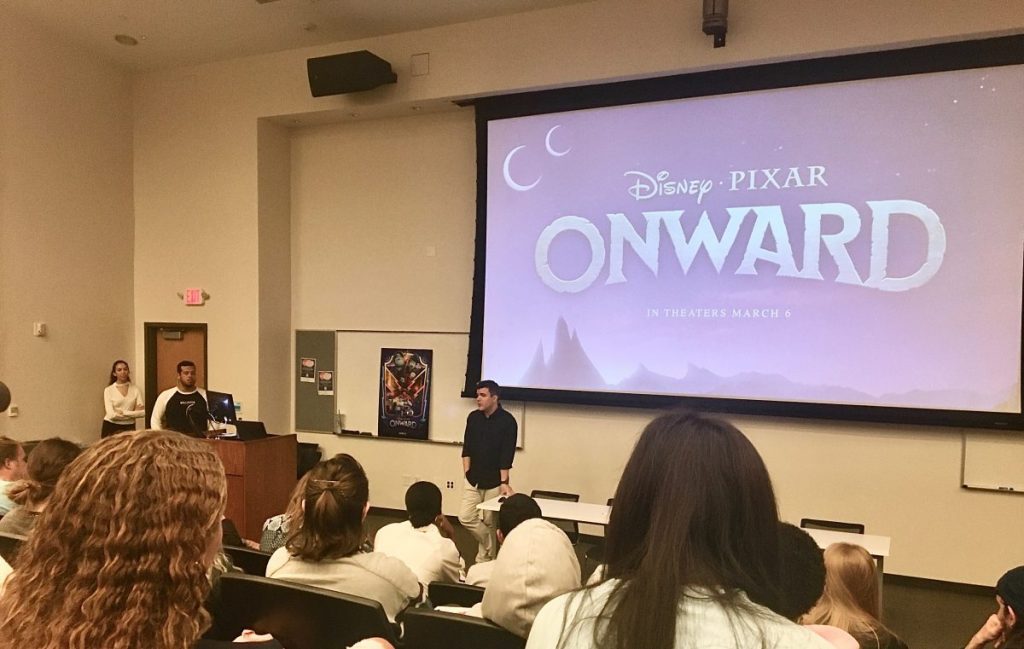 Growing up in Columbia, León was captivated with 2D animation at a young age. Over time, that passion developed into an intrigue in cinematography. Coupling them together, he aimed to focus on how emotions and mood came from film and animation.

“’How can people draw well and make things come alive?’ turned into wanting to understand the theory and emotions behind colors and shapes and light,” he said. “That’s the base of everything.”

Driven by his curiosity, León went on to receive his bachelor of fine arts in computer animation and bachelor of science in industrial engineering in France, crediting his supportive family towards the leap of faith.

In his final years of university, León worked with two other students to produce the short film “Al Dente” in 2007, which ultimately opened his door into the industry.

“It was the hardest I’d ever worked. I never slept,” León recounted, “It’s hard to look at it now because all I see are the mistakes because I’ve gotten better. But at the time, it was something I was really, really proud of.”

León proceeded to work as an art director, a visual development artist and a color and lighting designer at various animation studios spanning internationally. His work can be found in movies like “Despicable Me,” “Mr. Peabody and Sherman” and “the Lorax.” He has also worked with a VR company to develop the painting tool Quill, which allows users to work with art within a 3-D space.

León first came onto the Pixar Animation Studios team in August 2017, having been picked up full-time by the company after a four-week period of concept art freelance work. Since joining the studio, León has worked on both “Onward” as a set designer and “Soul” as a key lighting designer.

“Onward” is a film primarily inspired by fantasy films and novels, combined with a retro, modern suburbia. As set designer, León assists in designing and guiding the architectural integrity and individual set pieces for varying scenes within the film to build the hybrid-world from the ground up.

Concept art for locations involved throwing out locations and taking inspiration from different sources of traditional fantasy to enhance them. León’s set of environmental concept art included an attempt at modernizing a fantasy swamp, with a volcano in the distance adding a whimsical touch to the environment.

Using this Tolkien-esque fantasy setting as a base, he painted a rainy scene of industrial stacks, with an oil rig obscured in a hazy, dark green. Puddles littered along the roads and sidewalks around the structure bring about subtle overtones of wet, swampy mire. Just above the horizon is a highway, with murky orange and red streaks of cars passing by providing the only sense of warmth within the whole piece.

This creative process of pinpointing analogies between the two genres echoes throughout the movie, and during his demonstration, León guided students through the foundations of “Onward”’s Manticore Tavern scene. Displaying a brief, questions like ‘what’, ‘who’, and ‘when’ offer motivations that build the environment from the ground up before physical thought of design even starts.

“The Manticore runs her business to work and be an entrepreneur, but the kitschy, early 90s aesthetic reflects the theme park fantasy of her tavern,” León’s brief described. “She isn’t being true to herself.”

As such, in the movie, the basis of the design behind the setting was a family-friendly restaurant. Creating the environment started with architectural procedures like floor plans, enclosing volume, and building up from it. Designated furniture, designs and ideas combine the two elements of fantasy and mundane into a unique, immersive experiment.

From small decorative accents like personalized engravings and cheesy billboard gnomes holding menus to the food and cutlery, the details that might only be seen in passing serve to give story and meaning into the setting just as any normal restaurant might in the real life. Using these techniques, León and his team paint a coat of earthy realism that draws audiences in to care for characters on the screen.

“A lot of directors are storyboard artists, because storyboard artists usually contribute to the story as it goes on. The people within Pixar pitch stories with the goal in mind of making them personal.” León explained. “Because technology has advanced to where photo-realistic animations are possible everywhere, creativity is still the key factor.”

At the very base of his outstanding career is León’s pleasure in the passion he puts into his work of pursuing his voice in exploring the psychological impact of the lighting and color, and his biggest source of inspiration is the world around him. Taking his sketchbook wherever he goes, his work varies widely, ranging between abstract urban landscapes that break buildings into their foundational shapes to portrait painting that capture the essence of who people are.

“I prefer to make full decisions; instead of small fixes to a current piece, I try to do something altogether. Push the limits from one extreme to the other,” he said.

“Onward” is set to release on March 6.