Jordan Llano was a sophomore at the University of Miami when he attended his first Toppel Center career fair. On Tuesday, Llano, who graduated in 2016, returned to his alma mater as a recruiter for Toppel’s annual Spring Career Expo.

“Through career and accounting fairs, I met recruiters, a bunch of the employees, and that’s how I started my relationship with Deloitte,” said Llano, a senior auditor at Deloitte, a multinational professional services network and one of the “Big Four” accounting organizations. 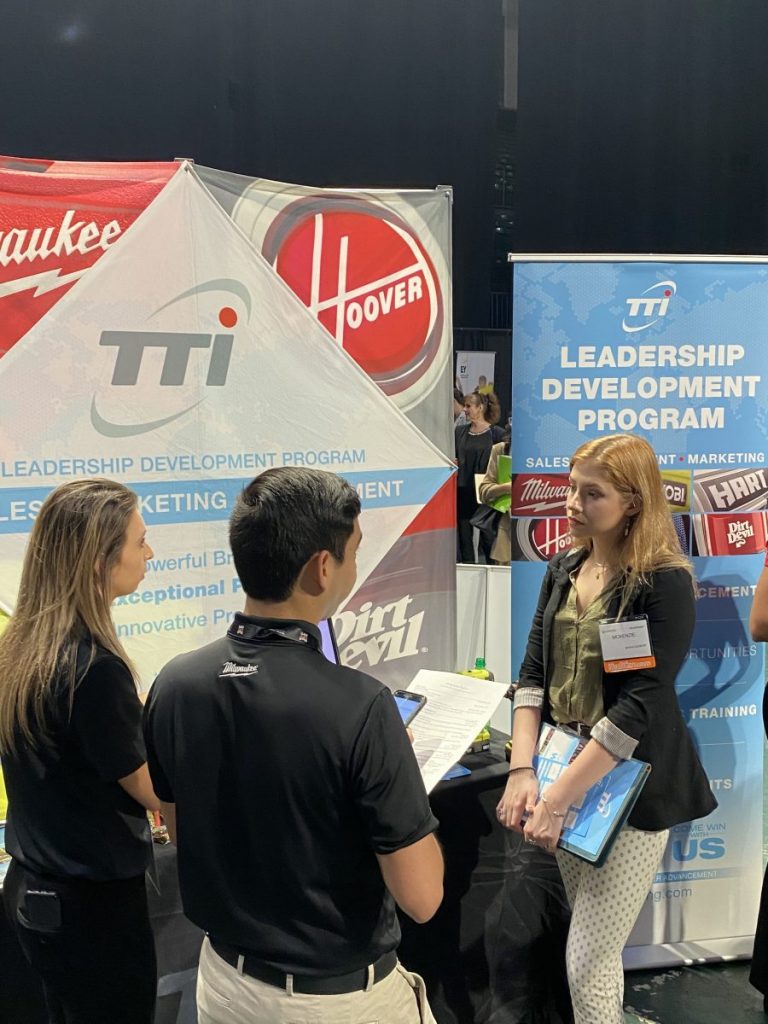 Llano was one of several alumni recruiters at the career fair at the Watsco Center, where nearly 700 students and alumni came in search of jobs, internships and a chance to scope the career industry scene.

“This was my first semester in marketing,” said Scott, who previously was a health science major on the pre-med track. “I really just wanted to learn a lot more about the different businesses that are around Miami and look for opportunities that present themselves to me.”

Alicia Rodriguez, executive director of employee engagement at Toppel, said career fairs bring the recruiters to campus, which is a huge benefit for students.

“It is at this point in your life when employers come to you and meet you where you are at,” Rodriguez said. “This does not happen when you graduate and move on.”

Campus interviews also give employees a chance to see how students’ skills and interests align with positions an employer has available, said Steve Kairalla, a 1999 UM graduate who is now executive producer at WSVN 7 News.

“There is no substitution for seeing people face to face,” Kairalla said, adding that recruiters are able “to explain in a way that a job posting couldn’t.”

Although online websites such as Linkedin are popular, Francisco Ponce de Leon, lead recruiter for the Miami Marlins, said meeting recruiters in person at an expo are unmatched to those that are online.

“More specifically for us where we are a recognizable brand, it is tough to filter throughout all the resumes that we get,” said Ponce De Leon. “It is a gift and a curse. So, the benefit here is you are getting ahead of the curve. Here you are going to be meeting with hiring managers in person and you’ll be able to jump ahead of the line.”

Dan Baptist, 21, attended the expo with a job already lined up from having attended Toppel’s fall Career Fair. He said he had an offer by November from Stanley Black & Decker manufacturing company.

Baptist said he came to the spring expo to talk to company representatives about the process of transitioning into the full-time position as a sales coordinator, which will be at the company’s Los Angeles office.

Baptist said he considers himself among the lucky UM students who land a job at career fairs.

“A lot of my friends do not usually work out here,” said Baptist, who said students need a strategy to successfully wade through the sea of employers who come to the career fairs.

Before he had the offer in the fall, Baptist said he made a list of all the marketing firms that he was interested in, did his research on the companies and narrowed them to the ones he was planning on meeting at the Career Expo.

“It is kind of a long experience going there—it’s a lot of people and it gets nerve-racking,” said Baptist. “I think a lot of people go in and try to hit too many companies. You got to keep it smaller—I think—make sure you hit the ones you want to get a job at.”

More than 100 companies representing a range of industries, from technology, sports and research to media, finance and auditing firms, participated in the spring expo.

The Toppel Center has resources to review your resume or practice your interview, which would prepare a student for major career expos like these, Rodriguez said.

The approach to prepare for these events varies by person because everyone is unique and requires different methods for interviews, resumes and preparation, Rodriguez said.

“There is no one formula for every student,” Rodriguez said. “I think each student is different and we treat each student as special and unique and help them in order to come to an event like this. “