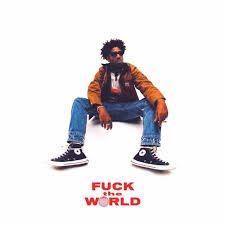 “‘F**k the World‘ to me is embracing the good sh*t,” singer and record producer Brent Faiyaz said of his sophomore album in an interview with Vice. “The overindulgence of sex, money, bullsh*t but also saying ‘f**k the world.’ Sh*t is f**ked up. The good sh*t and the bad sh*t, the yin and the yang. That’s why I like that specific expletive, because it can mean both things.”

The 24-year-old Maryland native surely did not fail to portray that message, dropping a 27-minute album– appropriately titled “F**k the World”– on Feb. 7 that conveys just as much power and soul as any longer body of work.

With no features, the singer is chartering his own path in creating sounds that transcend stereotypical, constricting notions of what music black individuals are expected to make.

“I don’t really feel the loyalty to any particular genre,” Faiyaz said in an interview with Rolling Stone.

Starting off strong, the opening track “Skyline” proves to be one of my favorite singles in Faiyaz’s entire discography. The chorus is almost haunting in nature as Faiyaz asks, “Do you know what makes this world go’ round?”, followed by a short pause and deafening beat-drop. Bare of excessive production, the opening song sets the course for the remainder of the alum.

The third track, “Been Away,” also deserves mention. It feels oddly reminiscent of Bryson Tiller’s “True to Self” album, released in 2017.

In the song, he pleads for his lady to wait on him as he gets his life together, acknowledging that he has been distant. “Been Away” received mixed reception, with some criticizing Faiyaz for supporting the rhetoric that women have to wait on men to get their lives together and others appreciating the vulnerability and beauty of the track.

been away by brent faiyaz…….. THE MATERIAL pic.twitter.com/JhGvXrRkvp

The titular track “F**k The World (Summer in London)” was released earlier this year and has already been met with widespread acclaim. The song opens up with lyrics that definitely make a lasting impression: “Wanna f**k the world I’m a walking erection.”

After first hearing that line, I had to immediately restart the track. According to GENIUS– one of the world’s biggest sources of lyrics and music knowledge– with this double entendre, Faiyaz expresses his hate and disconnect from the world, all while expressing his love for sex.

GENIUS proceeds to explain that, “an erect middle finger is oftentimes a symbol of disrespect, generally meaning ‘f**k you.’” In this case, it is directed at the world. Simultaneously, an erect penis generally symbolizes sexual arousal.

So, Brent’s erection is, symbolically speaking, a middle finger to the world we live in today, aligning with Brent’s evident disdain for modern society (check out “First World Problems/Nobody Cares” from his 2017 album “Sonder Son”).

My favorite, however, is easily “Let Me Know.” The first two lines will forever be immortalized as some of the most hard-hitting collection of words I’ve ever heard: “Who can I love when they tell me I can’t love myself? How in the Hell could I possibly love someone else?”

Brent has a special talent of delving into super personal issues, and it was interesting to see that someone I idolize still struggles with very human issues. This adds an additional layer of relatability that makes the project just that much better.

Over anything, listeners can surely appreciate Faiyaz’s honesty in his tracks. On “Rehab (Winter in Paris),” he begins the track saying, “I got too many hoes / But they ain’t you.”

Faiyaz often teeters on the line of hypermasculinity and blatant honesty about his sexual life, with individuals on social media either appreciating or “cancelling” his lyrical content for doing so.

Ultimately, “F**k the World” does not waiver from Faiyaz’s trend of embracing his insecurities and faults. And, though– in terms of bodies of work– Faiyaz’s 2016 E.P. “A.M. Paradox” will always have my heart, this album definitely features more consistent, mainstream bops that will finally give him the recognition he deserves.