Three hits on Friday. Four hits on Sunday. A total of 28 players left on base across all three games.

Probably not the statistics that Miami baseball would have liked to see after their highly anticipated series against the former No. 2, now No. 1 ranked Florida Gators.

But the reality is that Miami’s inability to swing the bat, combined with bullpen meltdowns and defensive errors gave Florida the opportunity to capitalize on a three game sweep of the Canes.

“Obviously just a bottom line is they got a lot of hits when they needed them and we didn’t,” Miami head coach Gino DiMare said after Sunday’s loss. “With runners in scoring position we seemed to not ever get the big hit and it seems like they got them.”

Friday night’s 2-1 loss ended after 11 innings. Miami’s primary closer, Daniel Federman, gave up two singles and an RBI double in the top of the 11th inning. Jordan Lala, Raymond Gil and JP Gates were the only players that recorded a hit. Saturday bore similar results. Up 2-1 in the top of the 9th with two outs, Federman again gave up an RBI double that sent the game to 10 innings, where Miami’s bullpen completely fell apart. Freshman pitcher Alex McFarlane surrendered a solo home run and walked two batters before Albert Maury Jr. came in and gave up four runs, with the last run attributed to an error by second baseman Tyler Paige. On Sunday, starting pitcher Slade Cecconi turned in an uncharacteristically poor performance and gave up four runs in five innings. Raymond Gil’s two-run home run in the bottom of the eighth cut Florida’s lead to 4-3, but Florida’s ninth inning RBI put the game away at 5-3.

But DiMare is hardly concerned with his team’s losses.

“The bottom line is we have a long way to go,” DiMare said. “Thank god it’s early in the season. We need to use this as a learning lesson and see what we need to work, and we got a lot of things we need to work on so we can come back down to earth and start focusing on getting better.”

Hitting was without a doubt Miami’s biggest struggle in the three games. The team was 1-18 with runners in scoring position over the weekend. 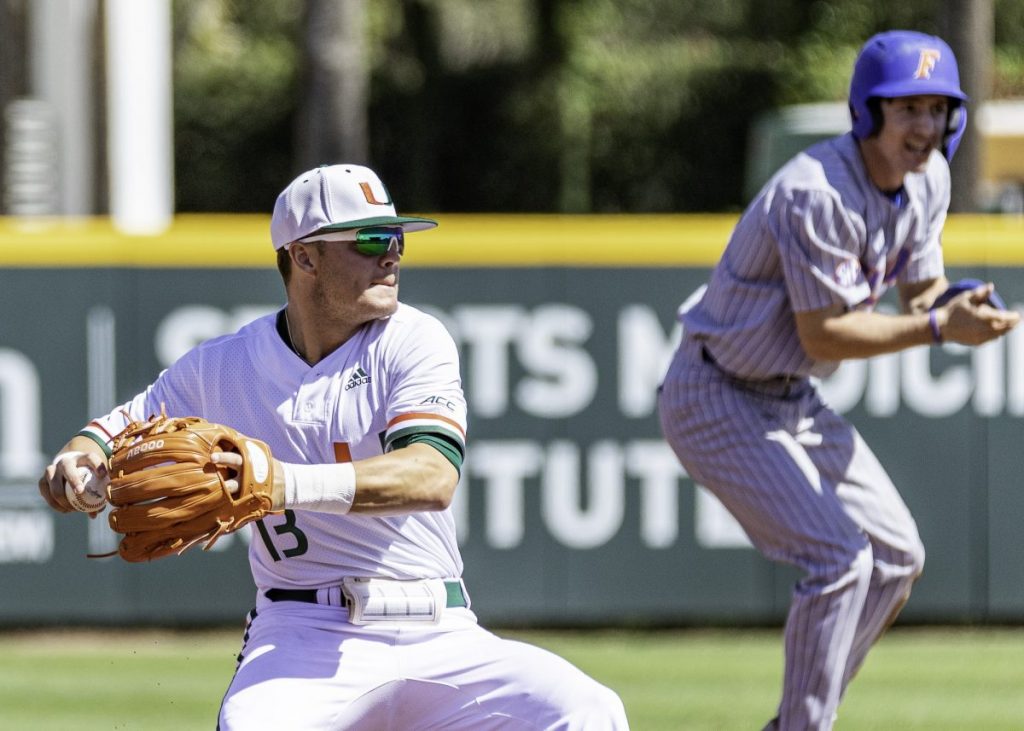 Rotating through three different batting orders in each of the games, the coaching staff had a difficult time putting finding the right combination of batters. Miami pinch hit four batters on Saturday and two batters on Sunday. Isaac Quinones’s single in the bottom of the 10th inning on Saturday was the only hit by a pinch hitter all weekend.

When asked about his team’s hitting struggles, DiMare acknowledged that it is early in the season and he has a lot of talented players who have to find their place on the field and in the lineup.

“Well, those are the guys that played last year that had good years,” DiMare said. “It’s so early in the year again to hit that panic button. If you start to talk about other guys, well who are they playing for. I’d like to get Thomas in the lineup, he’s a freshman who can swing the bat, but where do I put him. Certainly this weekend we haven’t jelled really well.”

DiMare assured that if this weekend’s struggles persist, he will make changes.

“As the year goes on, there will be some adjustments. If guys don’t get the job done, the lineup will be changed. Whether its rotation, bullpen or the lineup, if they don’t produce, then we will make changes. It’s just too early to start doing that and panicking, we haven’t played that game.”

As of Monday, the Hurricanes dropped to No. 7 in D1 Baseball rankings and the Gators moved up to No. 1. Miami will take on USF on Wednesday at 3 p.m. at Mark Light Field before welcoming Towson this weekend for a three-game series.