Home » Miami swept by Florida after another close loss

Miami swept by Florida after another close loss 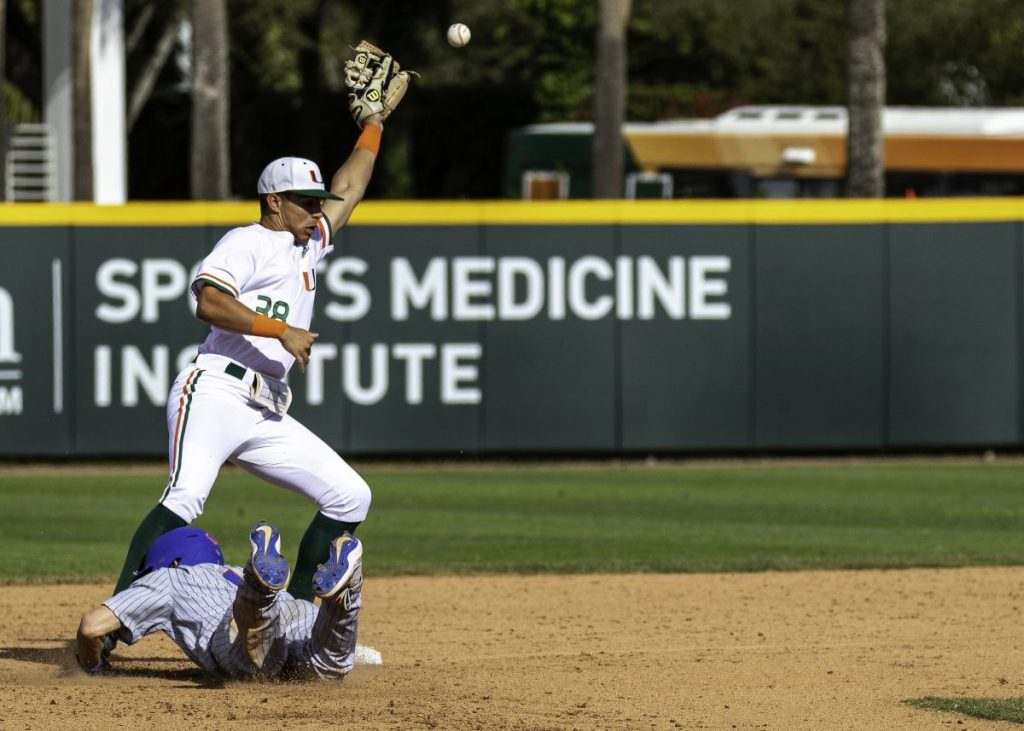 Luis Tuero (38) attempts to make a play at second base during Miami's 5-3 loss to Florida on Feb. 23 at Mark Light Field. Photo credit: Josh Halper

The three-game series between the No. 1 and No. 2 teams in the country lived up to the hype. But unfortunately for the No. 1 Miami Hurricanes, they were on the losing side of all three games.

After a 5-3 loss Sunday afternoon, the No. 2 Florida Gators completed a sweep against Miami, and pushed their winning record to 30-8 over the Hurricanes in the last 38 games

Unlike the previous two games this weekend, Florida did not waste time getting on the board Sunday, with designated hitter Jordan Butler scoring the first run of the day off a single hit by sophomore Jacob Young.

The Gators then capitalized on their first run with another from senior third baseman Kirby McMullen after sophomore shortstop Anthony Vilar failed to get the assist at second base to close out the frame.

After a 1-2-3 bottom of the first inning, Florida entered the second inning with a 2-0 lead. The Gators made their presence even more apparent with a home run over left field in the first at bat of the inning to extend the lead to three. 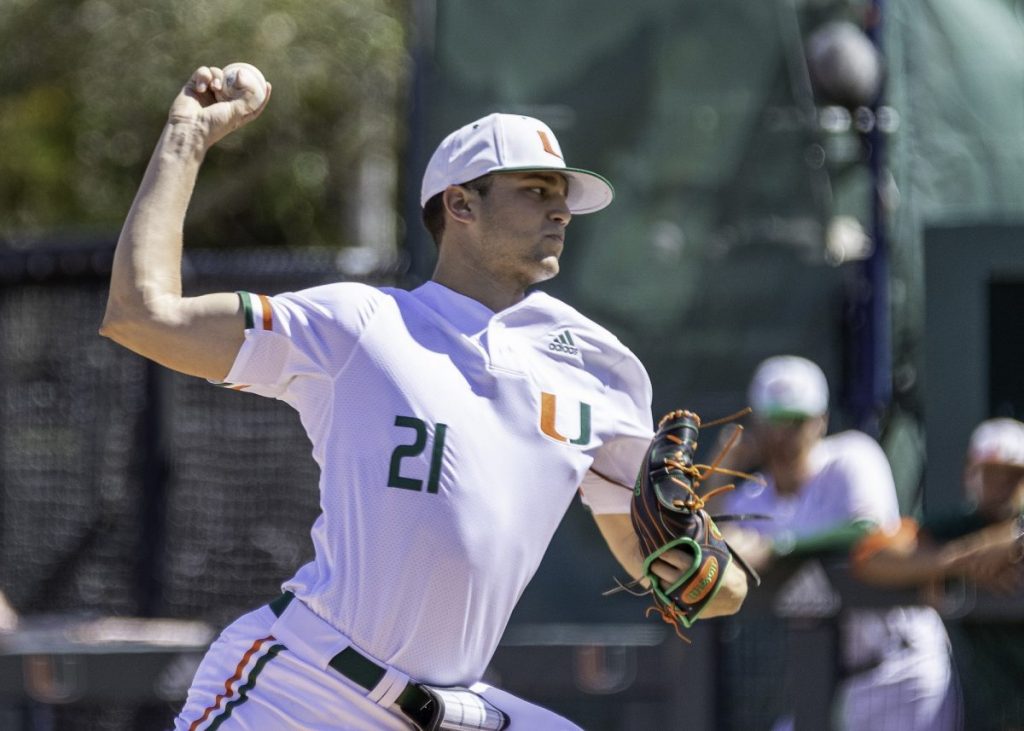 Miami was not able to muster a response until the bottom of the fourth inning, when a sacrificed fly from third baseman Raymond Gil allowed center fielder Tony Jenkins to earn a run and opened the scoring for the Hurricanes.

However, what proved to be the deciding factor in the game, and the series as a whole, was Florida’s ability to respond.

“When we come back and score two, they score a run, and that’s the mark of a good team,” Miami head coach Gino DiMare said.

The Gators proved this at the opening of the fifth inning with the team’s second solo home run of the game from leadoff hitter Jud Fabian. The Hurricanes had an opportunity to respond later in the fifth but closed the inning scoreless after Gil struck out with bases loaded.

“They got a lot of hits when they needed them and we didn’t. With runners in scoring positions, we seem to not ever get the big hit, it seemed like they got them,” DiMare said. 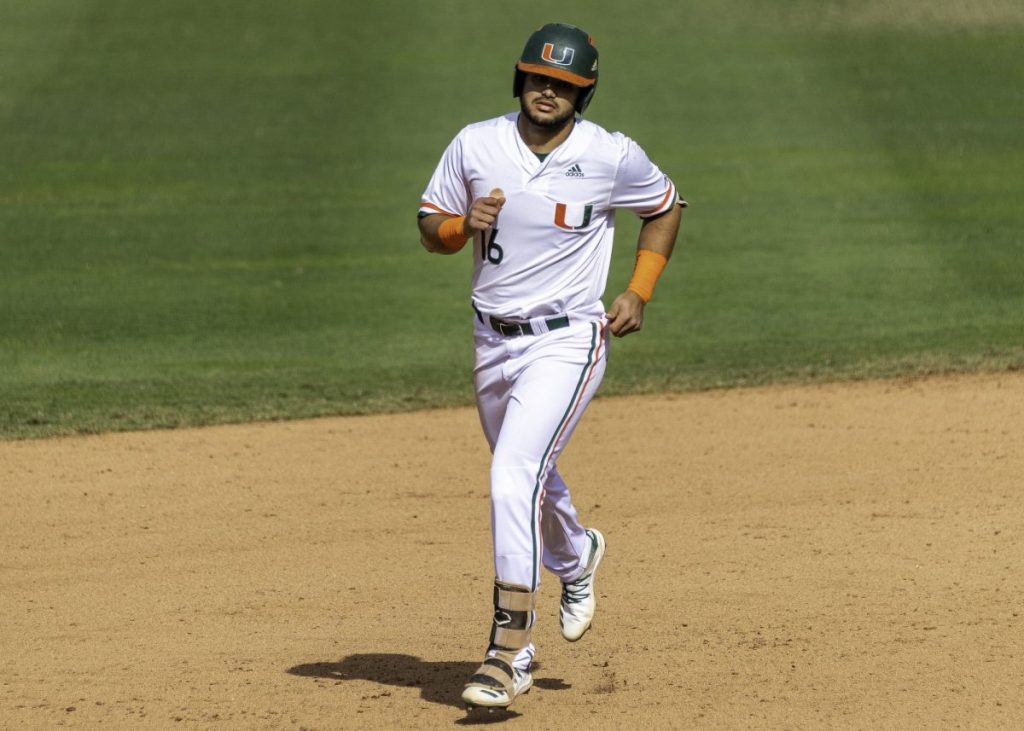 Raymond Gil trots to third base after hitting a two-run home run in the bottom of the eighth inning. Photo credit: Josh Halper

Gil went on to redeem himself with a two-run home run in the bottom of the eighth inning to make it a one score game.

However, it would not be enough as the Gainesville-based team responded again in the ninth inning to push its lead back to two.

“We have a lot to work on. It’s early in the season and we have to bounce back,” Gil said.

The inability to close from the mound undoubtably played a role in Miami’s defeat in the last game of the series.

“Slade’s outing wasn’t up to what we had hoped,” Gino said on the sophomore pitcher’s performance.

Cecconi threw a total of 95 pitches over 5 innings, earning a 4.09 ERA and registering seven strikeouts while allowing four runs.

At the start of the sixth inning, freshman pitcher Carson Palmquist came in to relieve Cecconi and performed well in his first appearance for the Hurricanes. The Fort Myers native threw 37 pitches over three innings, registering five strikeouts and no hits or runs.

“He’s a guy that we’ve been very high on as a freshman and you can be sure he’ll get some more opportunities in crucial situations moving forward,” DiMare said. 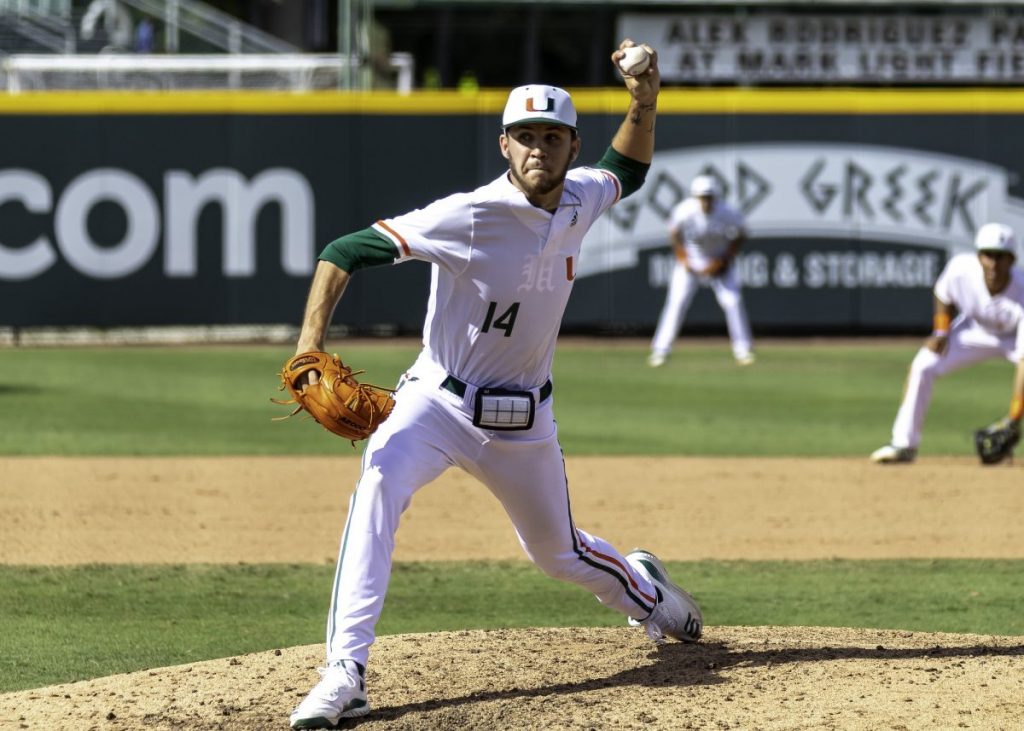 While the Hurricanes were swept in this weekend series against Florida, the coaching staff has reason to believe that previous experiences have proven Miami can persevere and remain competitive both within the Atlantic Coast Conference (ACC) and college baseball as a whole.

“We got swept last year here against NC State, I thought we did a pretty good job bouncing back and this team is going to have to learn to do that,” DiMare said.

The Miami Hurricanes will have another chance to prove their worth on Mark Light Field this upcoming Wednesday at 3 p.m. against the University of South Florida Bulls. 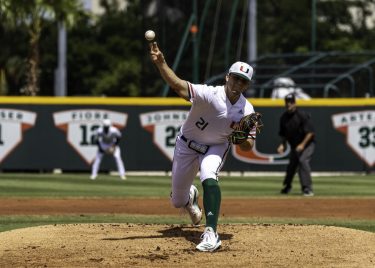