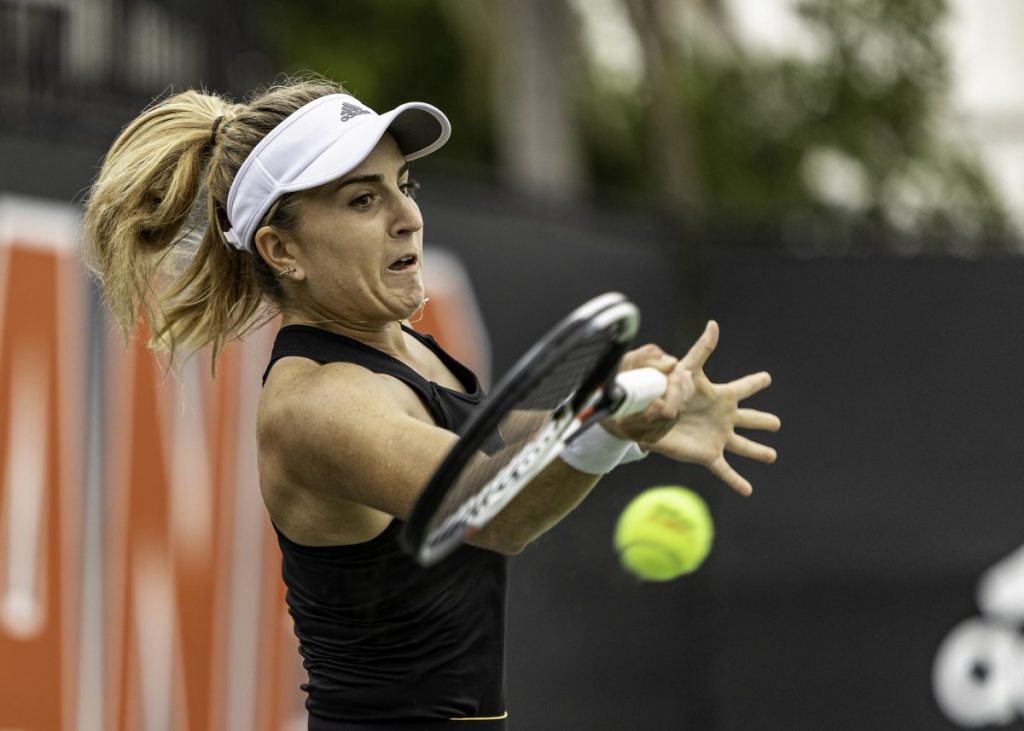 The No. 27 Miami Hurricanes got back to winning ways Friday afternoon at the Neil Schiff Tennis Center as they grabbed an early lead against the visiting No. 35 Virginia Tech Hokies and rode the momentum all the way to a big 7-0 Atlantic Coast Conference triumph.

“We’ve been playing great teams,” head coach Paige Yaroshuk-Tews said. “I think it makes the learning curve quicker. They can all play at this level…we’ve always had a tough schedule, but I think [this run of matches] just makes you better.”

The drama started early in the day for the Hurricanes. Having lost three of the past four matches’ doubles points going into Friday, the Canes found all three doubles matches reach 4-4 against the Hokies, and even fell behind 5-4 on two of the three courts. Maya Tahan/Nada Dimovska pulled away and won 6-4 on court No. 3, and Daevenia Achong/Selma Cadar fell 7-5 on court No. 2, leaving a tiebreak in the top match to decide the doubles result. But Estaela Perez-Somarriba/Florencia Urrutia didn’t disappoint and prevailed 7-6. 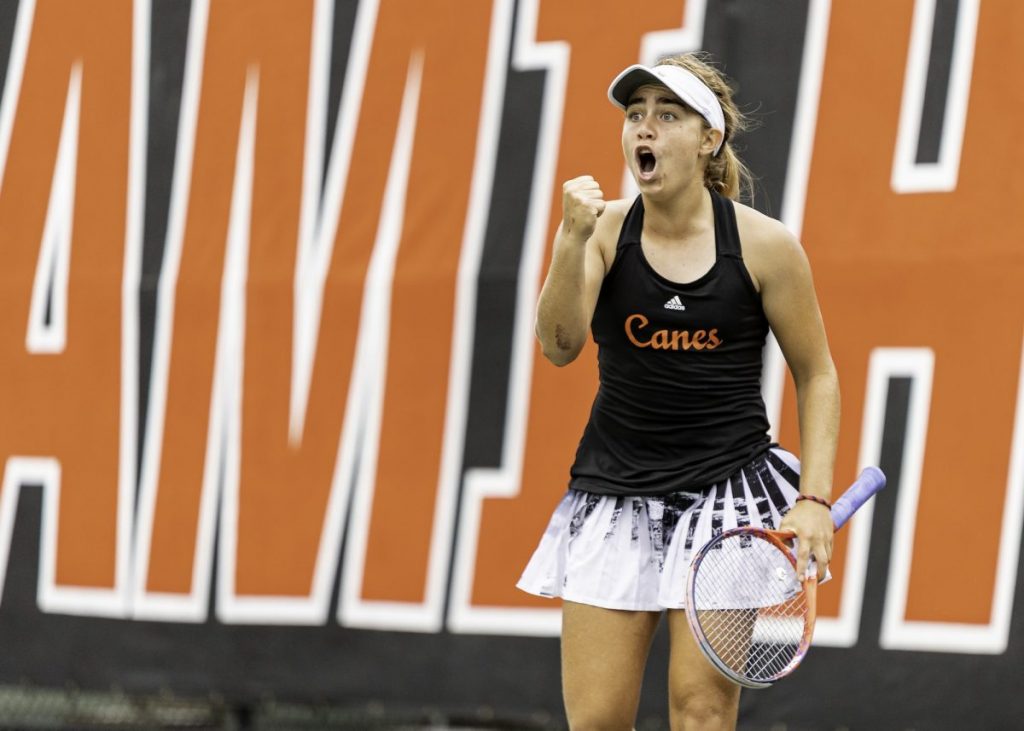 “[They] had never played together,” Yaroshuk-Tews said. “It was a little intimidating for [Urrutia], playing with her hero. She’s just better on the court with Estela, she looks up to her so much. To put her on court one as a freshman, there’s a lot of things that go into that. I think Estella did a great job of keeping her calm and Florencia came through.”

Having the built-in doubles advantage when singles commenced gave the Hurricanes an edge they hadn’t often had when playing other ranked opponents recently. It was after this segment of the match when UM began to roll, making the Hokies painfully regret not capturing any momentum.

“Our goal is not just to win but it’s to win 7-0. Doubles was close. We need to a better job with doubles,” Yaroshuk-Tews said. “It didn’t show on the scoreboard, but there were points in every match where it got a little tight and we were able to separate at those moments.”

Yaroshuk-Tews said that the energy in singles was better than in doubles, where she believes her team has been “too passive” in recent matches. But comfortable singles wins were enough to clinch the team win without any late afternoon suspense. 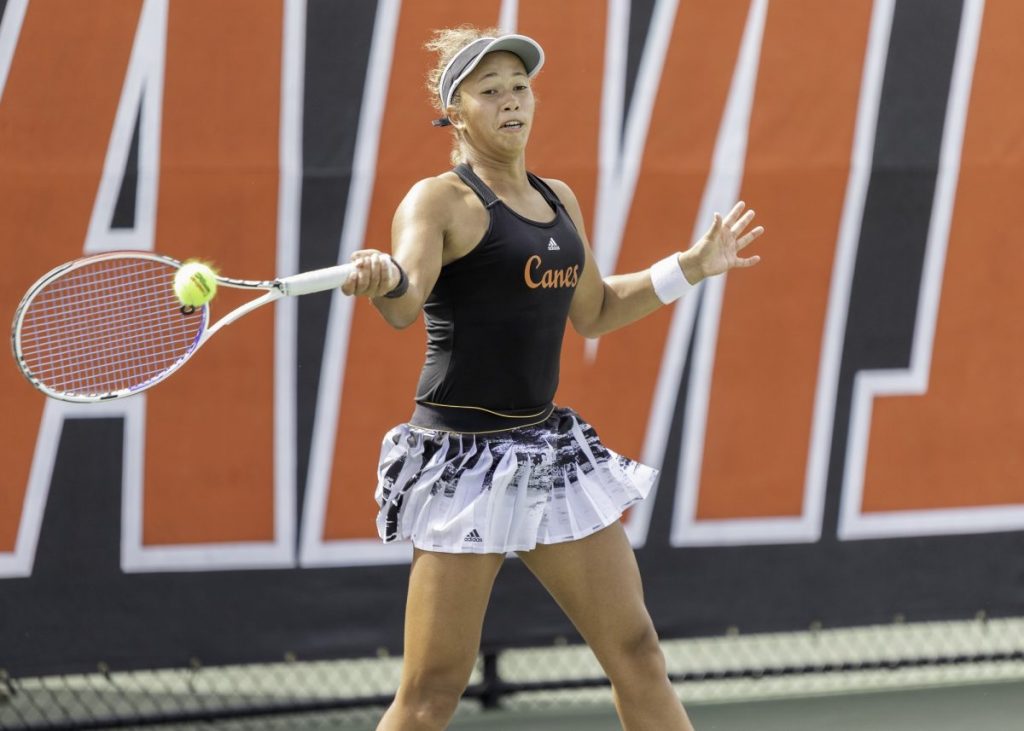 Perez-Somarriba, defending singles national champion and the top-ranked individual in Division I tennis, won easily over the Hokies’ Natalie Novotna, 6-0, 6-2. Achong, not to be outdone, won 6-0, 6-0 in the No. 2 match, taking out Virginia Tech’s Nika Kozar.

The Hurricanes certainly didn’t have to be dependent on their top assists to win Friday, with their quick wins instead being the cherry on top of a compete team effort.

Cadar took care of business on court No. 3, dispatching Elizabet Danailova 6-2, 6-2. Urrutia had no problems settling into singles after the doubles tiebreak, taking care of Nina Sorkin 6-2, 6-1, and Dimovska was victorious 6-3, 6-2 in the No. 6 match over Erika Cheng. 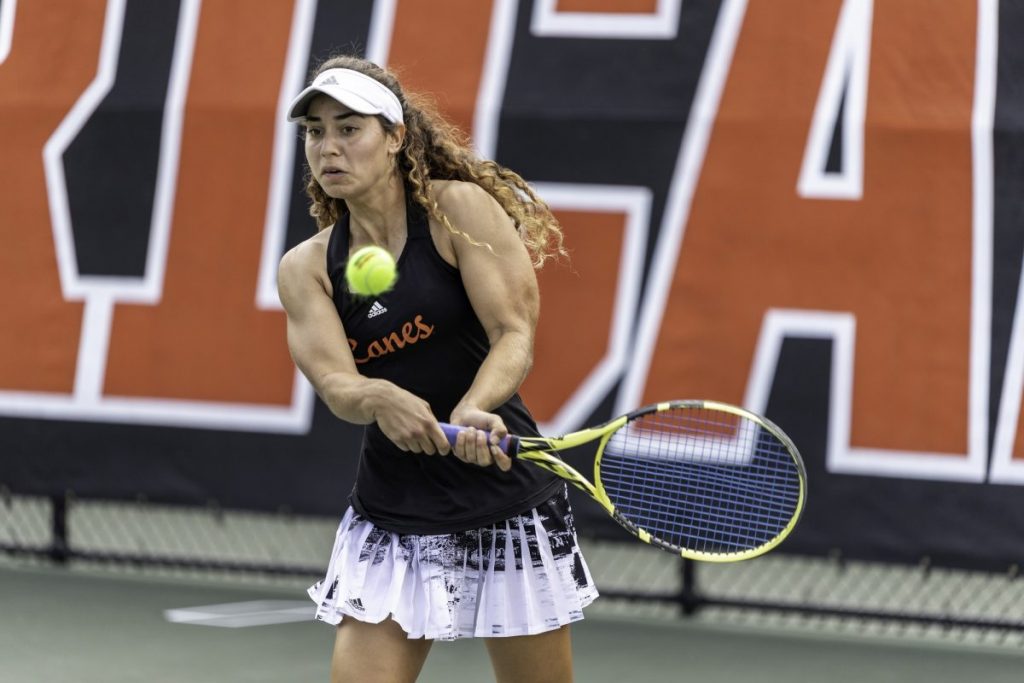 Maya Tahan’s first set was the closest the Canes had in singles, but she pulled out a tiebreak win in the first set and went on to win the second to secure the final match completed, 7-6 2 , 6-0 and clinched the sweep for the Hurricanes in match No. 5 against Shene Disbergen.

Miami continues its stretch of matches against ranked teams at 11 a.m. on Sunday when they face perhaps their toughest test of the season against the No. 1 North Carolina Tar Heels in Coral Gables.