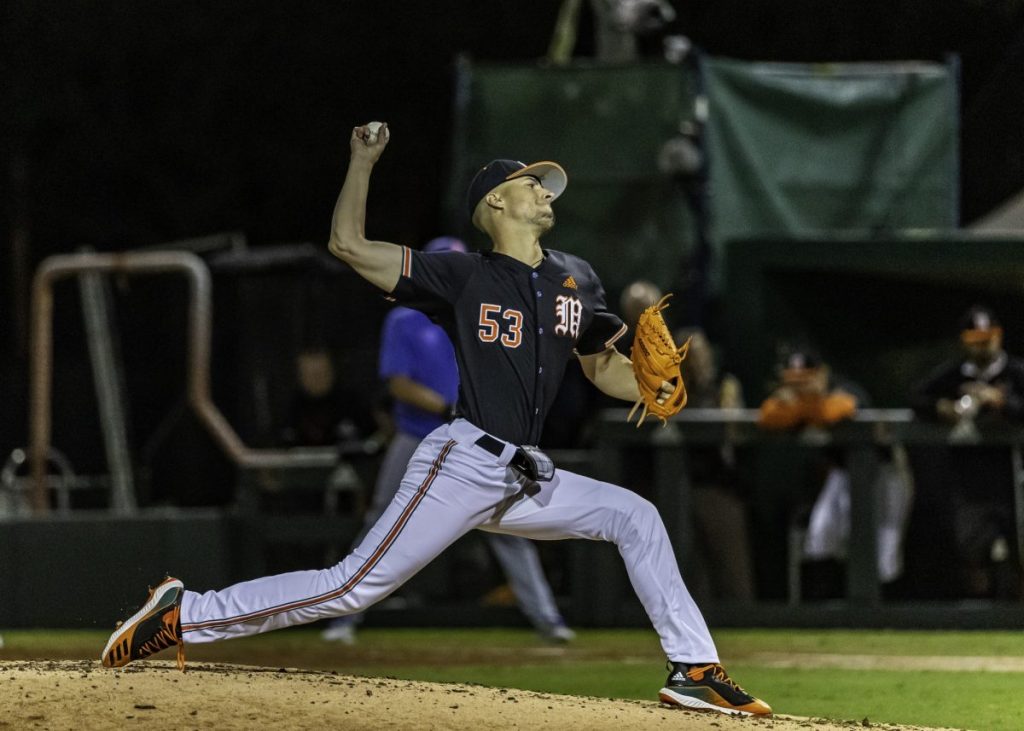 Nine innings of baseball just wasn’t enough for the top two teams in the country.

But after 11 innings, it was only fitting that one run was the deciding factor between the No. 1 Hurricanes and No. 2 Gators when they squared off Friday night, with the Gators coming away with the 2-1 win.

“Obviously its baseball, the ball is going to fall one way or the other, and it just happened to fall their way tonight,” starting pitcher Brian Van Belle said after the game.

Tied 1-1 entering the top of the 11th inning, Daniel Federman, Miami’s primary closer, gave up two singles, but it was a double up the third base line hit by Florida’s Jacob Young that scored the winning run for the Gators.

Miami had an opportunity to score in the 10th inning. With Chet Moore pinch running for JP Gates on first, center fielder Tony Jenkins hit a bunt up the first base line and it appeared as though the first baseman dropped the ball at first, allowing Moore to take third and Jenkins to take first, but Jenkins was called out because he ran out of the baseline, and Moore was forced back to first.

“That happens, you don’t realize how many times baserunners run out of the line,” Miami head coach Gino DiMare said. “But the problem is you never know it because there’s no throws from behind him. It looked like it was going to be a big inning.”

After beginning the game with four scoreless innings, Florida scored the first run in the top of the 5th. With Cory Acton on third, Young on second and Nathan Hickey on first, Kris Armstrong hit a line drive to the Miami shortstop, Anthony Vilar, who attempted to double the Gators up, but could not connect with second baseman Tyler Paige, which allowed Acton to cross home plate for the Gators. 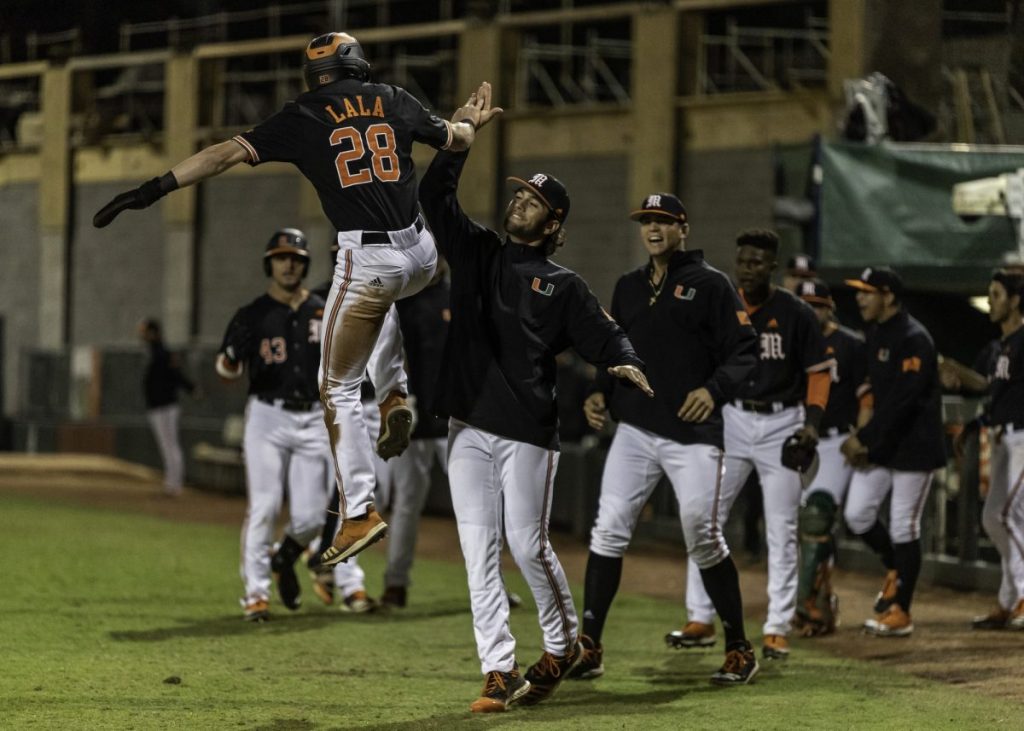 An inning and a half later, the “Let’s Go Canes” chant broke out at the sold out Mark Light Field after the Hurricanes tied the game at 1-1 on third baseman Raymond Gil’s RBI sacrifice fly ball to center field that allowed Jordan Lala to score. Lala hit a double to open the inning and advanced to third on a wild pitch that escaped behind the catcher.

While Federman collected the loss for the Canes, Miami starter Brian Van Belle pitched seven innings and surrendered just one run on 83 pitches with four hits and nine strikeouts.

“Just similar Brian, he’s amazing,” DiMare said. “He gets ahead of hitters, he’s a strike thrower. It wasn’t a pitch count thing, but he had some stressful innings. That last inning, JD [Arteaga] felt like it was a lot of pressure pitches, which is different than an easy inning. So that’s why we took him out.”

Tyler Keysor came in to replace Van Belle in the top of the 8th inning. The right-handed senior faced just three batters before he was pulled out of the game and replaced by JP Gates, who inherited a man on first and two outs. Gates pitched two innings on 26 pitches with no hits. 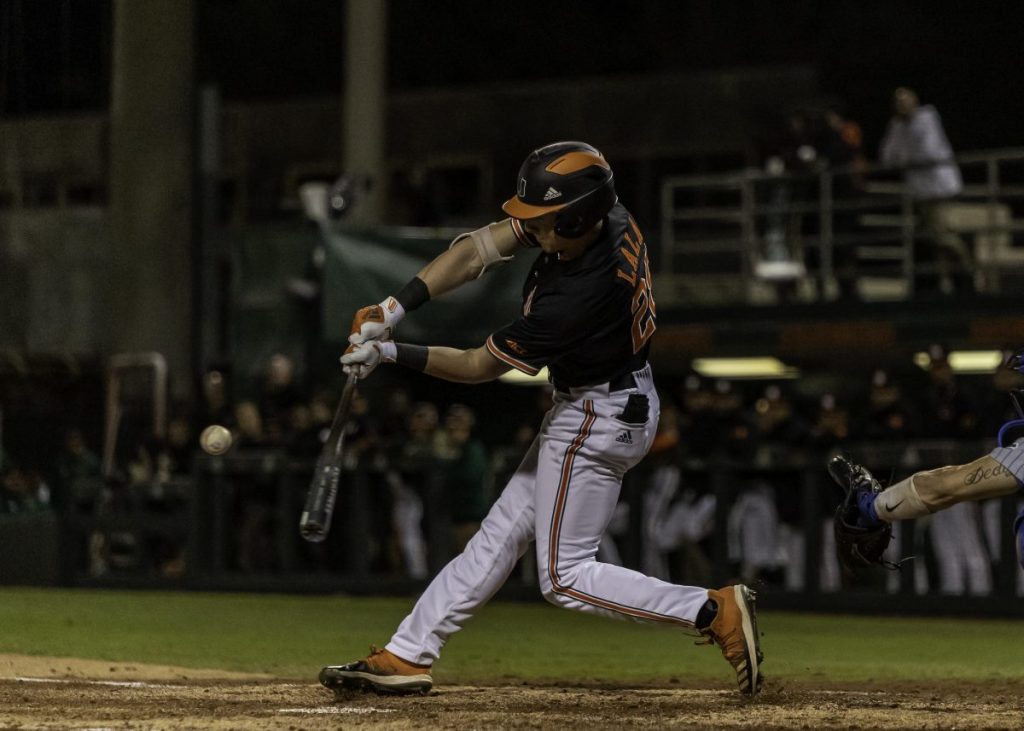 Jordan Lala had one of Miami's three hits in the 2-1 loss to Florida. The starting left fielder doubled in the bottom of the sixth inning. Photo credit: Josh Halper

“I didn’t think we swung the bat very well,” DiMare said. “I know the wind was blowing in, but that’s still no excuse. I thought we’d come out swinging the bat a little better than that, but their pitching is usually always their strength so we just have to turn the page and be ready to go tomorrow.”

The Gators have now won 13 of the last 16 games between the two teams. But DiMare is focused on the present and not strictly on the matchup with the Gators.

“Adversity builds character and I feel like this situation, it’s a tough pill to swallow, but I think we are going to come out with some fire tomorrow,” Van Belle said.

The Hurricanes will have two more opportunities to face the Gators, with a 7 p.m. game tomorrow and a 1 p.m. game on Sunday, both at Mark Light Field.