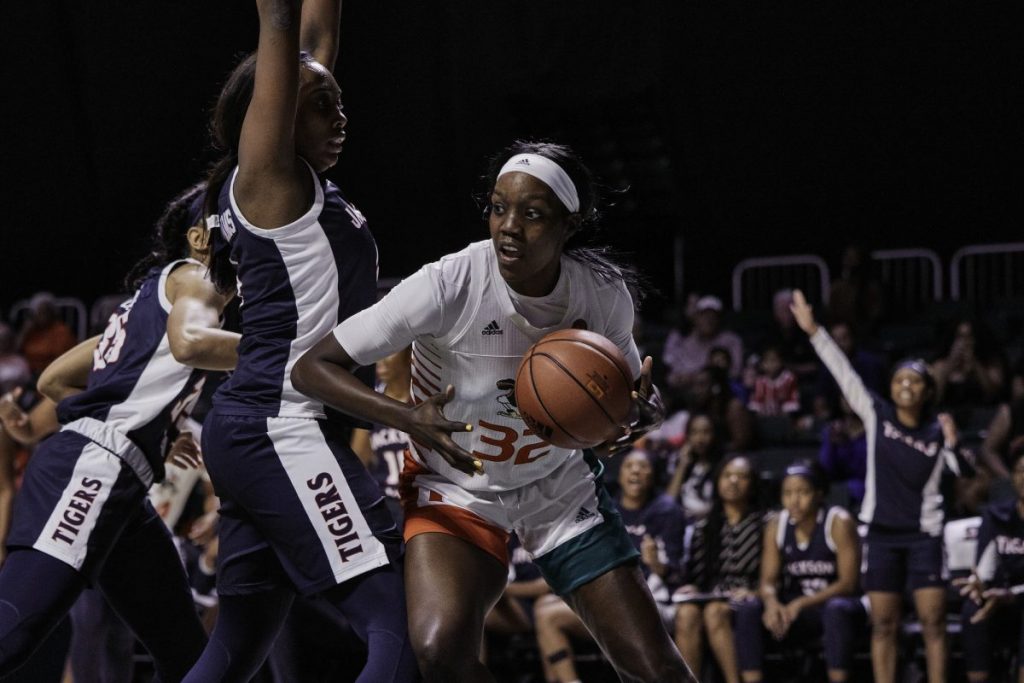 Beatrice Mompremier backs down a defender during Miami's game against the Jackson State Tigers on Nov. 10, 2019. Photo credit: Josh Halper

It has been a while since redshirt senior Beatrice Mompremier has been on the court for the Hurricanes, yet her dominance when healthy has not been forgotten about.

Mompremier has been named a top 10 candidate for the 2020 Lisa Leslie Award, as announced on Friday. This award is given to the best center in women’s college basketball and is presented by the Naismith Basketball Hall of Fame.

Leslie is known as one of the greatest female basketball players of all time winning National Player of the Year in 1994 at the University of Southern California and had an incredible career in the WNBA being a nine time all-star and three time league MVP.

In 12 games this season, Mompremier is averaging 16.3 points alongside 10.4 rebounds per game. Mompremier last played on Jan. 2 against Georgia Tech and has been out with a foot injury. A timetable for a return for Mompremier is unknown and she continues to be listed as day-to-day.

Since transferring from Baylor University, Mompremier has posted a double double of points and rebounds in 32 of her 46 games as a Hurricane.

The Hurricanes women’s team has struggled immensely during her absence. Miami is 3-8 without Mompremier and has struggled to generate offense. “Having Beatrice back will make it a lot easier on us,” guard Mykea Gray said. “Beatrice is Beatrice; an amazing player. I can’t wait for her to come back.”

Freshman Brianna Jackson has filled in for Mompremier and is averaging 6 points and 5.3 rebounds per game.

Despite battling an injury, Mompremier is still regarded as one of the top prospects for the upcoming WNBA Draft this April. Mompremier is expected to be drafted in the first round.

The winner will be selected on April 10 at the 2020 College Basketball Awards presented by Wendy’s.