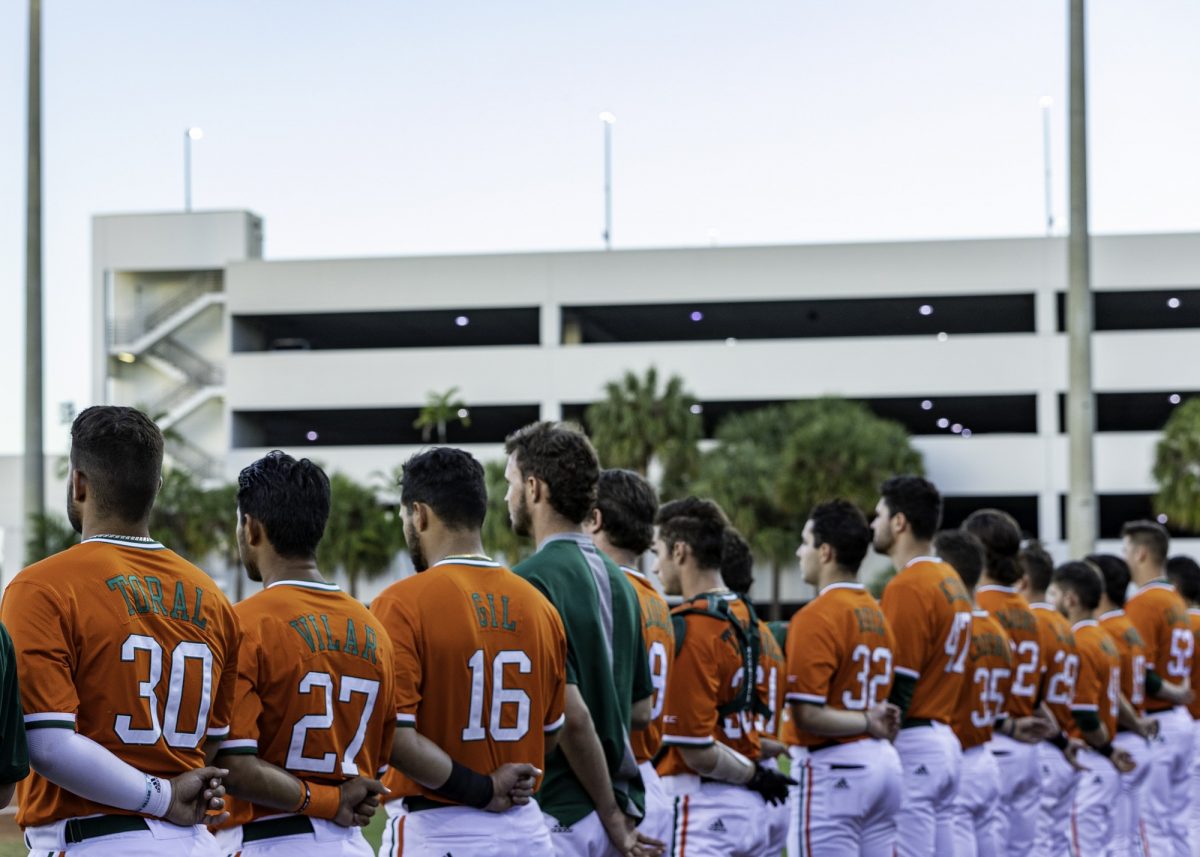 Just a single week after the 2020 college baseball season began, the top two teams in the country with face off in a three-game series that will determine early season momentum between the storied programs, have postseason ramifications, and possibly more than anything else, will determine bragging rights between the rivals.

That’s because the No. 1 Miami Hurricanes (4-0) will see one of their arch-rivals in Coral Gables this weekend in the No. 2 Florida Gators (5-0). UM is fresh off a three-game sweep of Rutgers and a win over Kent State on Wednesday. UF recorded their own sweep opening weekend over Marshall and logged wins over Jacksonville University on Tuesday and Wednesday.

While the present will display two programs in the top spots in the national rankings, the recent past shows a rivalry that the Canes so badly need to turn in their favor. The Gators have won the past five series between the two, and have won 14 of the last 18 matchups, including a two decisions that ended Miami’s season at the College World Series in 2015.

A season ago, the Hurricanes looked to be on the verge of a breakthrough at Florida, where they won Game 1 of the series 5-2 and lead by two runs late in the seventh inning of Game 2. Instead of clinching the series that evening, UM surrendered eight unanswered runs and fell again a day later to leave Gainesville in defeat.

Offensively this year, UF features four starters hitting over .350 in 3B Kirby McMullen, C/DH Nathan Hickey, C Cal Greenfield and CF Jud Fabian, with Fabian already having hit two home runs. Missing are two of their best hitters from last year in Nelson Maldonato and Brady McConnell, while they continue to enjoy the services of RF Jacob Young and LF Austin Langworthy.

Infielders Cory Acton, Brady Smith and Josh Rivera look to round out the lineup for Florida.

Offensive power will be another bellwether for Miami should they look to win the series. Five Canes are hitting at least .400 heading into the weekend, led by Adrian Del Castillo at .583 with a team-high two home runs. Tony Jenkins is hitting .500, while Gabe Rivera, Anthony Vilar and JP Gates are also recording hits in 40 percent or more of their at bats.

But pitching may be the biggest key if Miami is to finally break through against the Gators at Mark Light Field this weekend. Florida has heavily relied on their arms over the past half-decade, with now-top professional prospects such as Brady Singer and Jackson Kowar tearing up all competition and leading UF through a run of four straight trips to the CWS and a national title in 2017. But with the Canes now boasting a three-headed monster of their own on the mound, can the series momentum change for the better?

Friday night will be a battle between Miami redshirt senior Brian Van Belle (1-0, 0.00 ERA) and Gators ace Tommy Mace (1-0, 3.00 ERA). Both right-handers found their way to be Friday starters after being Saturday and Sunday starters for much of last season. Van Belle is a week removed from a career-high 10 strikeouts in an opening-night win over Rutgers while tossing six shutout innings. The Archbishop McCarthy grad allowed seven hits and two earned runs in a Game 3 loss at UF a year ago, while also pitching six innings.

The junior Mace meanwhile allowed two runs in six frames last Friday against Marshall and pitched seven innings of Florida’s Game 2 win over Miami in 2019. He had a 5.32 ERA last season.

Saturday night will feature a duel between Miami hurler Chris McMahon (1-0, 3.00 ERA) and fellow junior Jack Leftwich. McMahon struck out nine in his first start against Rutgers, earning two runs allowed over six innings. But his six and 2/3 innings of work weren’t enough in the Saturday game at UF last year, allowing two of the nine Gator runs.

Leftwich only pitched five innings in the Sunday matchup between the in-state foes a season ago, but allowed just a single run en route to the series clinching win. He showed how dangerous he can be, however, in his six shutout innings pitched last Saturday facing Marshall, striking out eight hitters and earning no runs.

Sophomore Slade Cecconi (1-0, 1.50 ERA) will throw for the Canes on Sunday, a week after taking a no-hitter into his sixth and final frame against the Scarlet Knights. In that game, he struck out eight batters and allowed only one run. Pitching mostly weekday games for much of 2019, Cecconi will be making his first appearance against the Gators.

The Sunday start may prove to be less straightforward for Florida. Last Sunday, sophomore Nick Pogue (1-0, 15.00 ERA) took the bump to start, only to allow six hits and five earned runs in just two innings, with head coach Kevin O’Sullivan having to use Christian Scott (1-0, 0.00 ERA) out of the bullpen to claim the sweep-securing win for the Gators. Pogue did pitch a shutout frame in relief in Wednesday’s extra innings win over Jacksonville on Wednesday, so it’ll be interesting to see what direction they take for Game 3 this weekend.

Miami did use six relievers Wednesday, but with a day of rest in between Kent State and Florida, along with what UM hopes are long, efficient starts from their aces, DiMare will look to use his bullpen in late game situations. Look for the likes of Tyler Keysor and JP Gates to play the role of middle reliever before handing the ball to closer Daniel Federman late in games. Also available to pitch will be Albert Maury, Alex Munroe, Alex McFarlane and Jake Garland if needed.

After what the Hurricanes hope is a successful weekend series, they’ll return to action Wednesday at 3 p.m. against South Florida, before playing host to Towson next weekend, with all games at Mark Light Field.