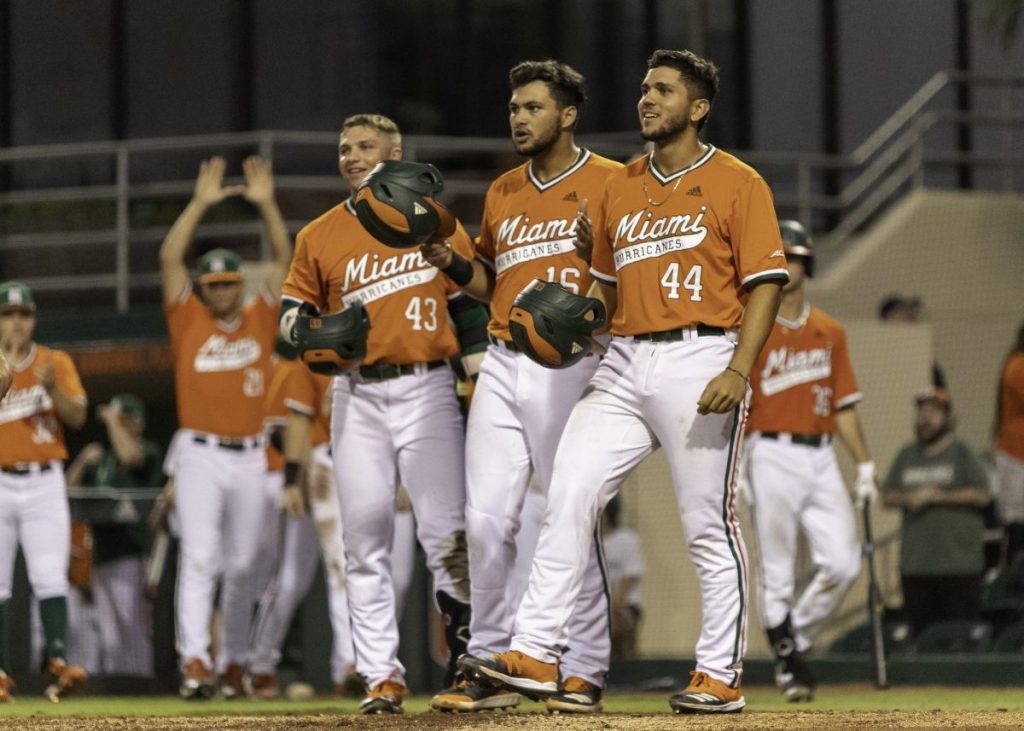 In their first game as the No. 1 team in the country, the Miami Hurricanes showed why they are deserving of the ranking.

Alex Toral got the offense going for Miami with a three-run home run in the bottom of the first inning, the first home run of the year for the first baseman. Last year, Toral led the ACC in home runs with 24, also good for third in the NCAA.

“It was great, finally get that one off my chest,” Toral said. “That first one means a little more.” 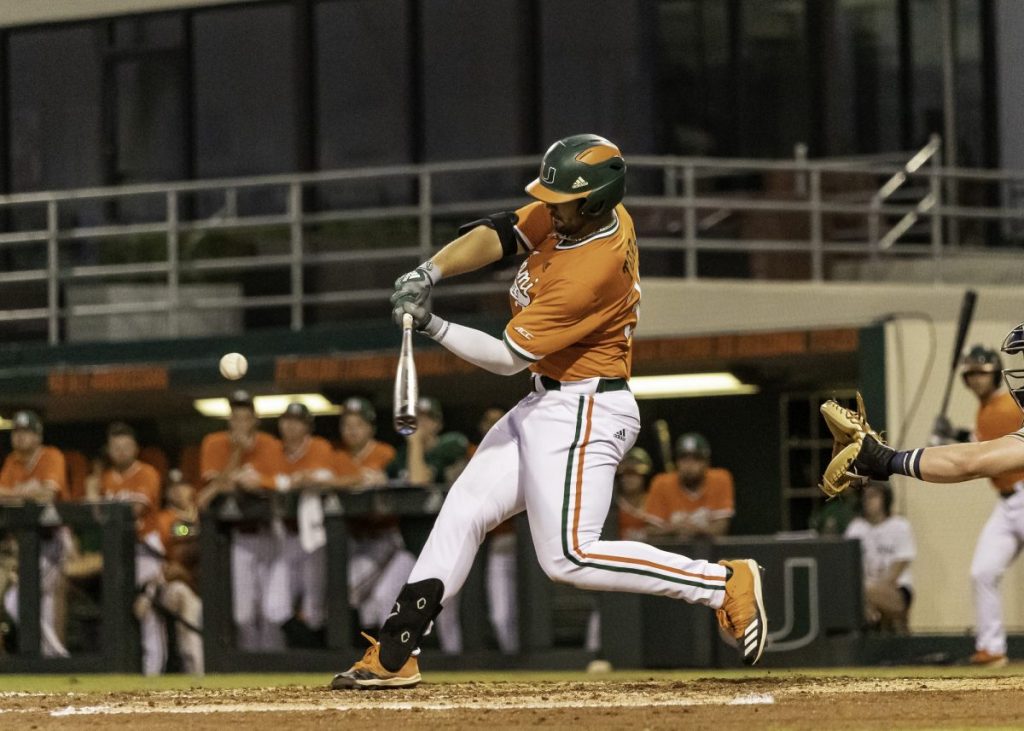 The flood gates opened up for Miami in the third inning when freshman Jared Thomas, who made his first start at catcher, hit a two-run RBI double to push Miami’s lead to 5-0. Center fielder Tony Jenkins followed up in the next at-bat with a three-run home run. Adrian Del Castillo, who started the game as the designated hitter instead of catcher, closed out scoring in the third inning with a two-run RBI that gave the Canes a 10-0 lead after three innings of baseball.

“We’ve been working extra hard in the offseason, especially on the offensive side of the team, but that’s something that we take a lot of pride in, so its good to see it pay off,” Toral said.

In the fourth inning, Jenkins accounted for his fourth run and Miami’s 11th with a RBI single. The Canes scored their final run of the night after second baseman Anthony Vilar hit a RBI sacrifice fly that allowed Thomas to score.

“Its definitely a great feeling to hit a home run, of course, but we’ve been working really hard so its finally good to see everything pay off,” Jenkins said. 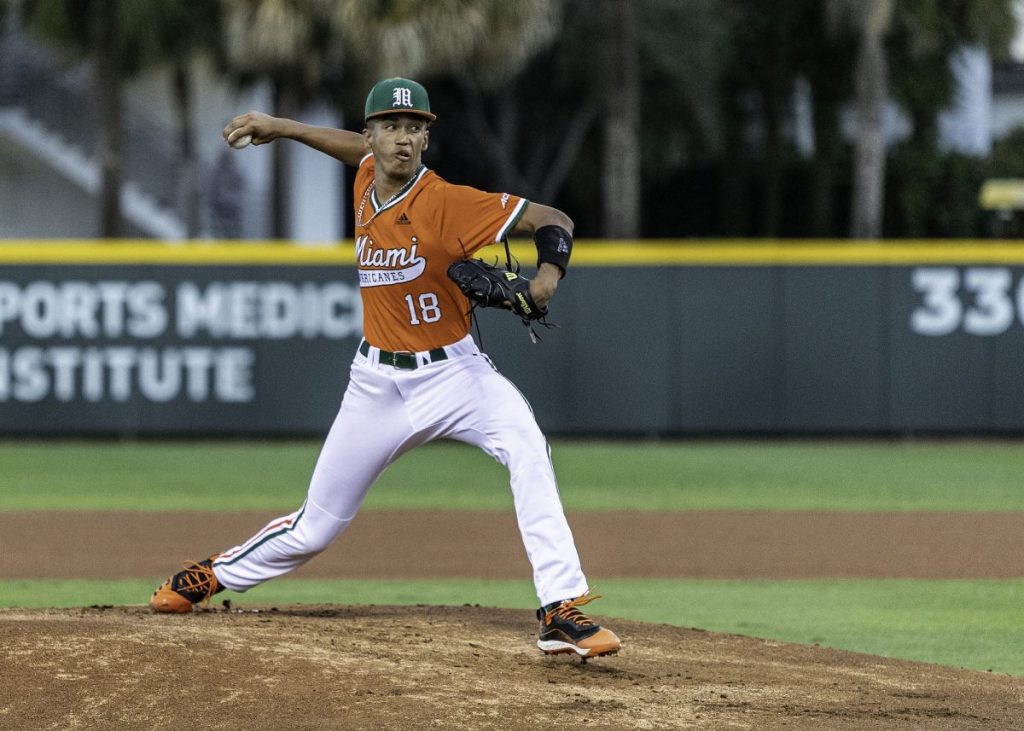 Freshman pitcher Alex McFarlane made his first start as a Hurricane and threw three strikeouts and allowed one hit over two innings in Miami's win over Kent State. Photo credit: Josh Halper

Freshman pitcher Alex McFarlane made his first start as a Hurricane and finished the game with three strikeouts, two walks and one hit on 33 pitches. DiMare pulled McFarlane after two innings of work to save his arm for the weekend.

“Man, I like watching him pitch,” DiMare said. “He is really talented. I’m sitting here thinking I can’t wait to see this kids second and third year. He’s got an electric arm and he’s just tapping into what he’s doing.”

McFarlane was replaced by fellow freshman Jake Garland, also a right-handed pitcher. Garland threw two innings, tallying two strikeouts and one hit on 30 pitches. Miami rotated through five pitchers, who threw just one inning each, for the remainder of the game.

Despite being ranked No. 1 as of Monday, the Hurricanes are still focused on getting better everyday.

“It puts something to our name, when everyone is coming here and they know they are playing No. 1 Miami, everyone is coming at us with their best,” Toral said. “There’s no where you can go from one but down. It puts us in a position to keep grinding and keep doing what we have to do to stay there.”

The Hurricanes will next play the No. 2 ranked Florida Gators in a highly anticipated series this weekend, beginning Friday at Mark Light Field.

“Our guys are excited,” DiMare said. “They are about as excited as they can get once we told them, ok, lets get ready for the Gators when this game is over. I’m thinking the crowds here are probably going to be as good as they’ve been in a long time, which is great for us. It will be electric and I know our guys will be ready to play.”

Canes in office: Current South Florida mayors who attended the U
Commuters win an award for the first time in Sportsfest