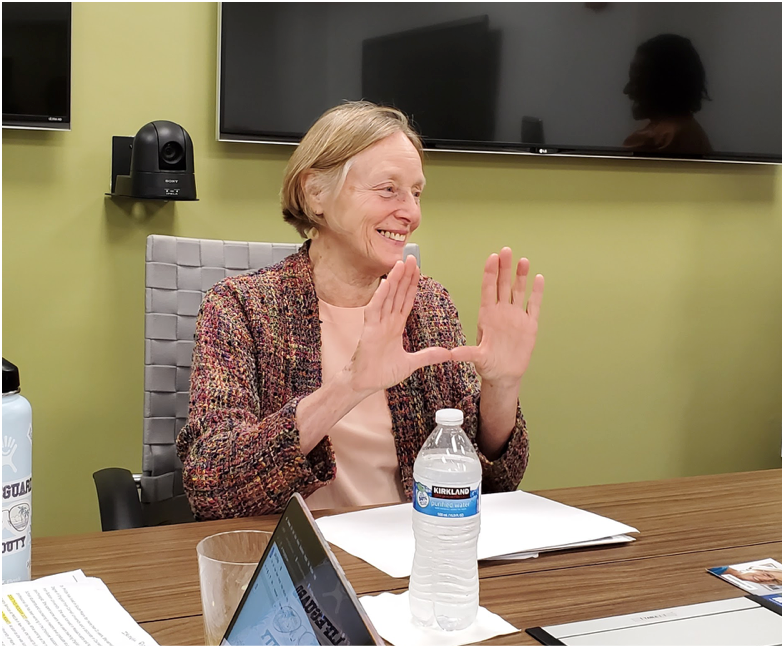 Sally B. Philips, the new mayor of South Miami, talks to The Miami Hurricane staff during interviews earlier in February. Philips is a retired University of Miami administrator who ran the Employee Assistance Program for 10 years. Photo credit: Rachelle Barrett

Philips is not a politician by trade. She earned a bachelor’s degree in English at Cornell University, received her undergraduate degree in 1967 and earned a doctorate in counseling psychology and counselor education from Boston University in 1982.

Philips moved to Miami in 1982 while working for MetLife insurance. At UM, Philips ran the Employee Assistance Program and taught courses as an adjunct faculty. She also had roles in several university behavioral health programs.

Philips had previously run for a commission seat but lost that election to incumbent Josh Liebman in 2018. She is currently chair of South Miami’s Planning Board and served on the Zoning Board, Budget and Finance Committee, Retirement Pension Board, City Manager Selection Committee and Police Officer’s Board of Trustees.

Voter turnout was 27.7 percent, a historically high mark for an election that includes only one municipal election on the ballot. Philips won 34.02 percent of the vote, with a 11.23 percent lead over the runner-up, former mayor Horace G. Feliu.

In terms of her qualifications compared to those of her opponents, Philips said, “I do not think that any one of the other candidates has served the length of time nor gained the depth of experience in the governance of the City of South Miami as I have.”

Philips has lived in South Miami for over 21 years, and her campaign is very community focused. Among other community centered concerns, Philips says the downtown area needs work to be more inviting and walkable to improve foot traffic and residential inflow.

“To get people to walk, we need to build apartments and residences downtown. But I want to keep residential and single-family homes at a low height,” Philips said.

“Tomorrow, South Miami comes back together to govern the city as neighbors and friends,” Philips said. “I am glad to be inheriting a city in as good shape as it is, and I look forward to a cooperative and productive two years rallying the commission to address South Miami’s needs and challenges.”

6 spring fashion trends to look out for
Canes in office: Current South Florida mayors who attended the U