Miami’s Metrorail serves as a cost-effective and easily-accessible transportation option for many of the town’s residents and students. The 25-mile dual track has 23 stations throughout the city including stops at Miami International Airport, the University of Miami and Brickell. Still, the swath of land below the mammoth transportation option has been underutilized for years. Meg Daly, the founder of the Underline and Friends and chief visionary behind a coming revitalization project, aims to change that.

The Underline is a new project that aims to effectively use the area underneath the Metrorail. This will ultimately function as a bike path, living art installation and open space for those looking to escape the chaos of Miami roadways. It will pass straight under the University Station stop, offering a unique opportunity for University of Miami students to take a break between classes or go for a run amongst a bevy of foliage and art created by Miami natives. 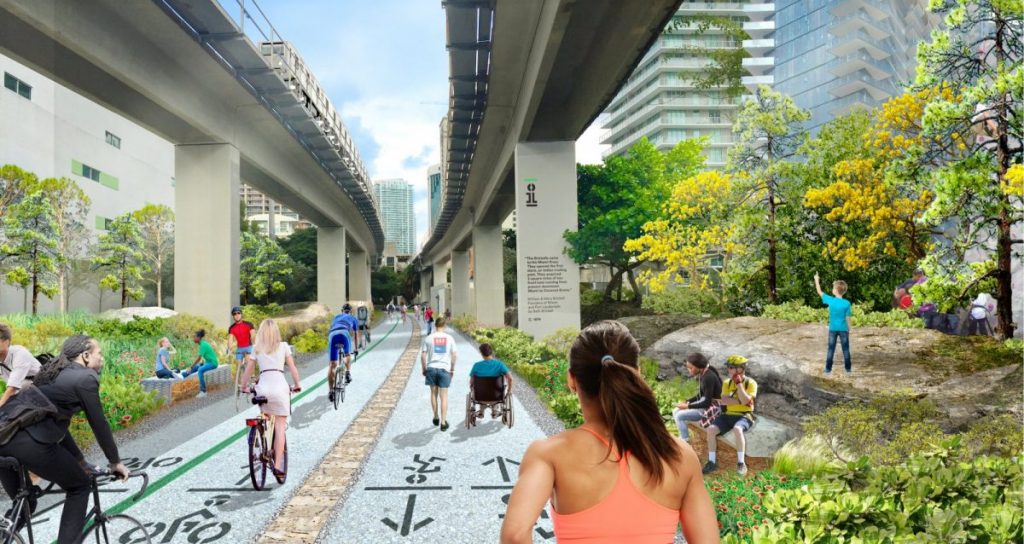 The underline is supposed to be a refuge for those who prefer walking.

This year, the project broke ground, and the people behind the Underline have marked June 2020 as the opening for the first of it’s five sections. The rest will be built over the course of the next five years. The Underline will start in Downtown Miami, pass straight through Coral Gables and end in South Miami. Daly said she is hoping it will increase Miami’s walkability while also giving people a safer option for travel.

“These roads aren’t safe because they’re not designed to be safe,” said Daly. She also underscored the importance the Underline will have on pedestrian safety and comfort.

The Underline will also work to make the area surrounding UM more attractive. “All of the great schools I can think of have a great front door,” said Daly. “We’ve been speaking to architects and teachers at the University of Miami, and a lot of them agree that not having that front door sort of makes it feel separate from the community.”

The Underline’s central walkway will be surrounded by new spots for people to stop, shop, eat or just hangout. Daly said she hopes this will drive further growth in surrounding areas and offer Miami residents an urban experience more similar to walkable cities like New York. 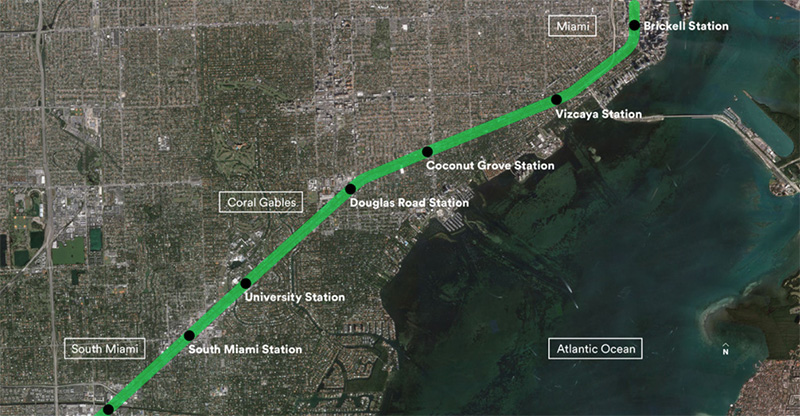 This map shows the stations that the Underline is projected to run through once it is complete Photo credit: Coconut Grove Chamber of Commerce

“If you’re in New York or Chicago, what happens is that the street is so interesting, you’re passing things along the way so that you don’t feel like you’re going from here to there,” Daly said. “There will be a lot of things built alongside [the Underline] so that if you’re walking or biking, you’ll also be seeing places that you can stop and shop and eat or hangout. It really makes it a destination and an experience.”

In addition to new retail spots, the Underline will be a hub for local art. Each leg of the living art installation will pay homage to its respective district by commissioning local artists to use the strip as their canvas. People can expect an array of modern pieces ranging from sculptures to paintings.

“As we build or design each phase we will have public input. We listen, so that we really understand their priorities. The design is really built around public preference and priority,” she said.

University of Miami faculty and students alike say they are excited at the prospect of a more inviting city scape. Miami streets are loud and not necessarily tailored for pedestrians, so to have a park that is made for active people is exciting.

Professor Joanna Lombard of the UM School of Architecture cited Martin Luther King Metrorail station as one such area that would welcome a more walkable city scape.

“What excites me is the sort of reinvention of the city and reclaiming our streets. Giving our kids the option of not having to be driven anywhere and ultimately feeling safe taking public transit,” said Lombard.

Nhadya Lawes, a second year majoring in English literature, said she believes that “the Underline is a really innovative way of using urban space.” She said she also believes that if it is made in a sustainable fashion, it will “be a space where all Miami residents can connect and come together.”