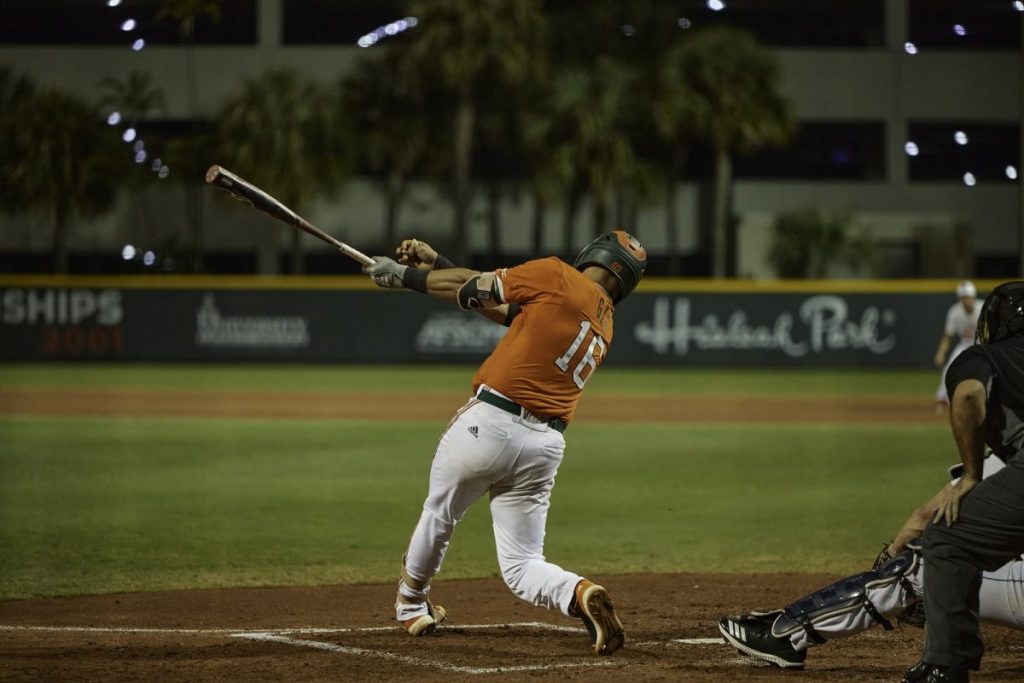 As the Hurricanes prepare to open the season on Friday, it is worth taking a look at the competition the University of Miami baseball team will be facing this season.

Miami will begin the 2020 season the same way it has for the past 5 years, with a three-game series against Rutgers University. The Hurricanes are 8-2 in their last ten meetings and look to extend their current three-game winning streak against the Scarlet Knights.

Miami will face six ranked opponents this season in what will undoubtedly be its toughest matchups.

The Hurricanes will not be wasting time as their third series will pin them against the University of Florida (UF) Gators. Ranked fourth by D1Baseball.com going into the 2020 season, the Gators remain a formidable in-state competitor. Last season, Miami went 1-2 against the Gators are were outscored 15-9 early in the season.

Miami looks to improve upon its record against Florida with an experienced core that went through the troubles of last year. The same cannot be said for the Gators, who lost their top five home run hitters.

The team will struggle to fill the void left by catcher Mike Zunino, who went third overall in last year’s MLB First-Year Player Draft. To make matters worse, UF lost second string pitcher Karsten Whitson for the season due to shoulder fatigue. Miami will exploit the several holes left in Florida’s roster in order to gain the upper hand this time around.

After Florida, Miami will compete against multiple unranked opponents until late March, when the team will go up against No. 15 Duke. Miami has historically performed well against the Blue Devils, winning 40 of its last 52 games against them.

Nevertheless, the Duke series will pose a serious challenge for the Hurricanes given the Durham-based team’s recent success. Duke is coming off two consecutive super regional appearances, while Miami has only made one NCAA tournament appearance in the past three seasons.

Considering the Blue Devils’ hot streak and the team’s strong returning pitching lineup, Miami should not write off this season’s series against Duke.

Home field advantage will play a large role in Miami’s series against the No. 23 University of North Carolina (UNC). All three games will be played at Mark Light Field.

Miami won only one game against the Tar Heels last season, with their most notable loss occurring at the Atlantic Coast Conference (ACC) Baseball Championship as the Hurricanes fell to UNC 5-7. North Carolina went on to secure a spot in the Chapel Hill Super Regional Game of the 2019 NCAA tournament, where they fell to Auburn after letting up 13 runs in a single inning.

While the Tar Heels had a lot to show last year, they return only three proven hitters and will need to improve upon their running, after ranking 237th last season in stolen bases. If Miami can improve upon its infield play with juniors Raymond Gil and Freddy Zamora, they may be able to avenge last year’s lackluster performance against UNC.

Going into the season ranked No. 1, Louisville will be one of the toughest opponents Miami faces off against in 2020.

After falling to eventual national champion Vanderbilt in last year’s College World Series, Louisville enters at the top of the preseason poll for the first time in its history. With one of the strongest pitching lineups in college baseball, the Cardinals hope to inflict damage with first-team All-American and reigning ACC Pitcher of the Year Reid Detmers.

Compared to its other ranked opponents, Miami does not have much of a history against Louisville. The Hurricanes had not played the Cardinals since 2016 before last season’s 1-2 series. With hard-hitting preseason All-Americans Adrian Del Castillo and Alex Toral, Miami looks eager to challenge Louisville’s top-ranked pitchers.

After the Louisville series and its second game against Florida Gulf Coast University, Miami will be playing a three-game series in Dick Howser Stadium against No. 12 Florida State University.

The series win was the second consecutive against the Seminoles and the Hurricanes look primed to continue the streak to three in late April.

However, the Seminoles return junior pitcher CJ Van Eyk who will look to make an impact against Miami in what may be his last season in Tallahassee.

The Hurricanes will close out the 2020 season in Atlanta against No. 19 Georgia Tech. While Miami won last season’s series 2-1, the sole loss came on the opening game of the series, which was the night the team retired former head coach Jim Morris’ number.

If Miami was able to come away with the series win in 2019, it should have no problem getting the job done this season. In the offseason, the Yellow Jackets lost home runs leader Kyle McCann and strikeout leaders Xzavion Curry and Connor Thomas. The Hurricanes hope to capitalize on Georgia Tech’s losses and use the series to propel themselves into the postseason.

The entire schedule is as follows: