After visiting the Arlington National Cemetery in eighth grade and seeing the Tomb of the Unknown Soldier, Owen White suddenly had a feeling of curiosity and respect for the military that never went away.

“It was so moving. I could have stood there for the entire day and not said a word,” said White, a senior majoring in electronic media.

Originally from the small town of Granby, Connecticut, White spent his high school summers at a soccer camp at the Naval Academy in Maryland, where he learned more about the military. He was also interested in airplanes because his dad worked at an airport.

Knowing his interests, White decided in high school to join the Reserve Officers’ Training Corps’ Air Force branch when he went to college, regardless of where he ended up. 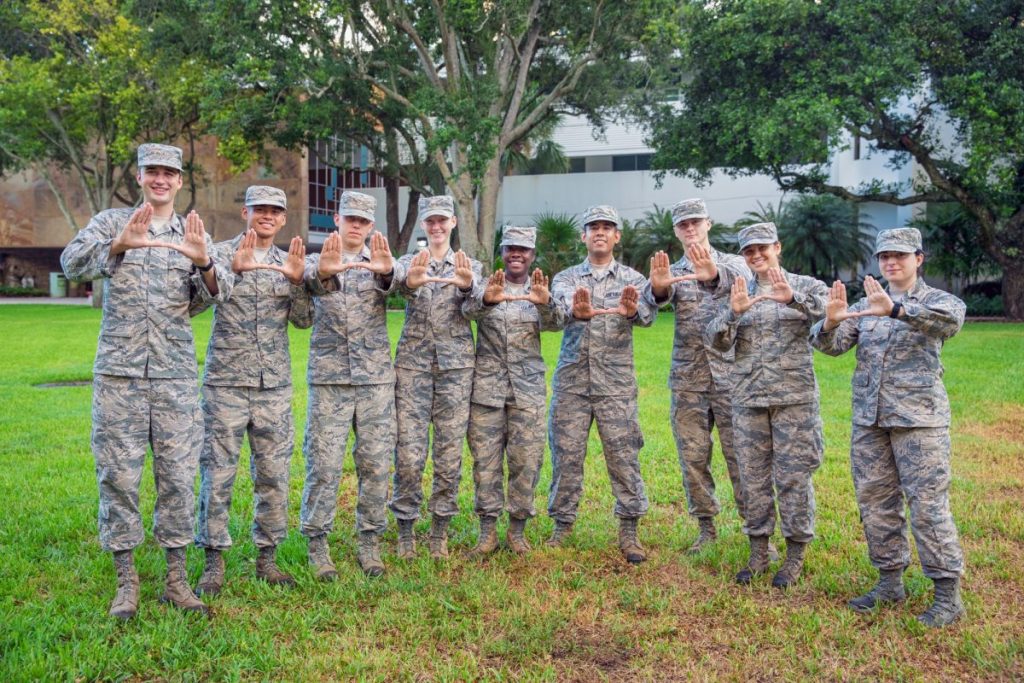 Cadets from Air Force Detachment 155 throw up the U at a flag raising ceremony on the Air Force's birthday.

ROTC is a group of college and university-based programs for training commissioned officers of the United States Armed Forces. It is split up into three branches: Army, Navy and Air Force. ROTC is offered at more than 1,700 universities across the United States, including the University of Miami. After a student graduates from an ROTC program, they become lieutenants in the military.

While people join ROTC because they want to serve their country, there are also financial benefits and job security that comes along with it.

For Kyle Kopacek, a fifth-year senior majoring in chemistry, ROTC was not something he thought about doing until his last semester of high school when he decided to apply for the Air Force ROTC High School Scholarship Program.

“I wanted to go to med school, I still do,” Kopacek said. But joining ROTC gives him job security, and he said he can still pursue his dream of being a doctor after he serves. 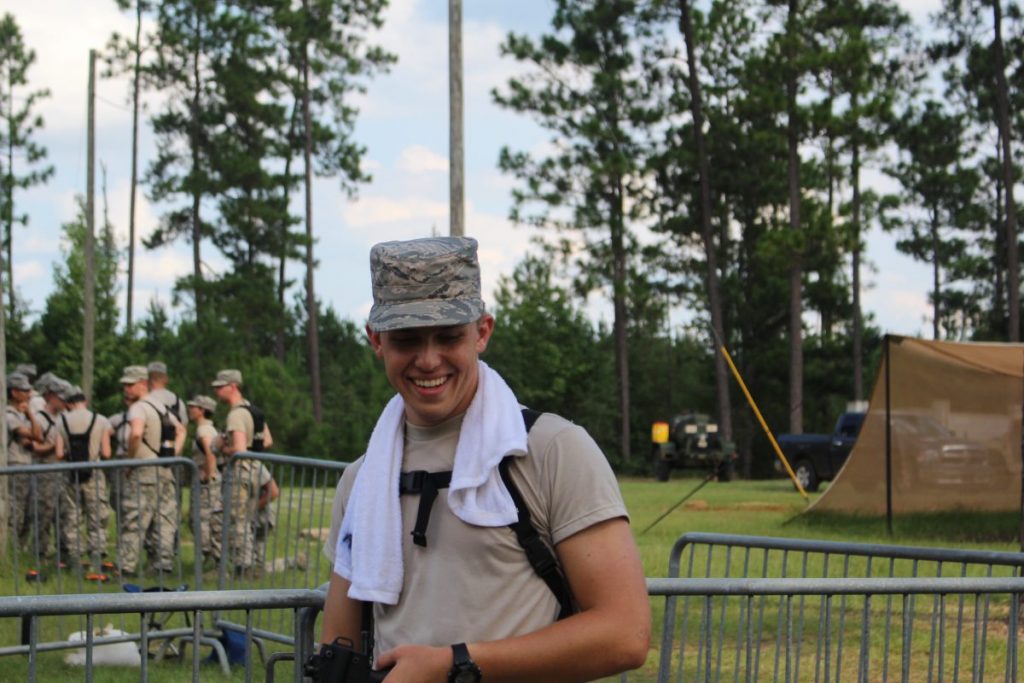 “My family’s very poor, and my brother was also in college, so it became very hard for my parents to find a way to pay for me to attend school,” said the computer science and broadcast journalism major. “I applied and got the high school scholarship. It just gave me a little bit more security.”

But the hardest part was yet to come: completing ROTC training while being a full-time student.

After field training, students take the professional officer course. The upperclassmen are in charge of setting the agenda for the underclassmen, or GMCs. All the cadets train together every Tuesday, Wednesday and Thursday from 6:30 a.m. to 9:30 a.m.

Captain Clifford Pigford, assistant professor of aerospace studies at UM, works closely with AFROTC cadets. He met White, Kopacek and Miller in the fall of 2018.

“Cadets White, Kopacek and Miller have all progressed from a follower-ship role as general military course cadets onto professional officer course cadets, who have mastered the basics and are now responsible for leading new GMC cadets,” Capt. Pigford said.

Overall at UM, there are only 27 cadets in the Air Force ROTC program out of 11,307 undergraduate students. 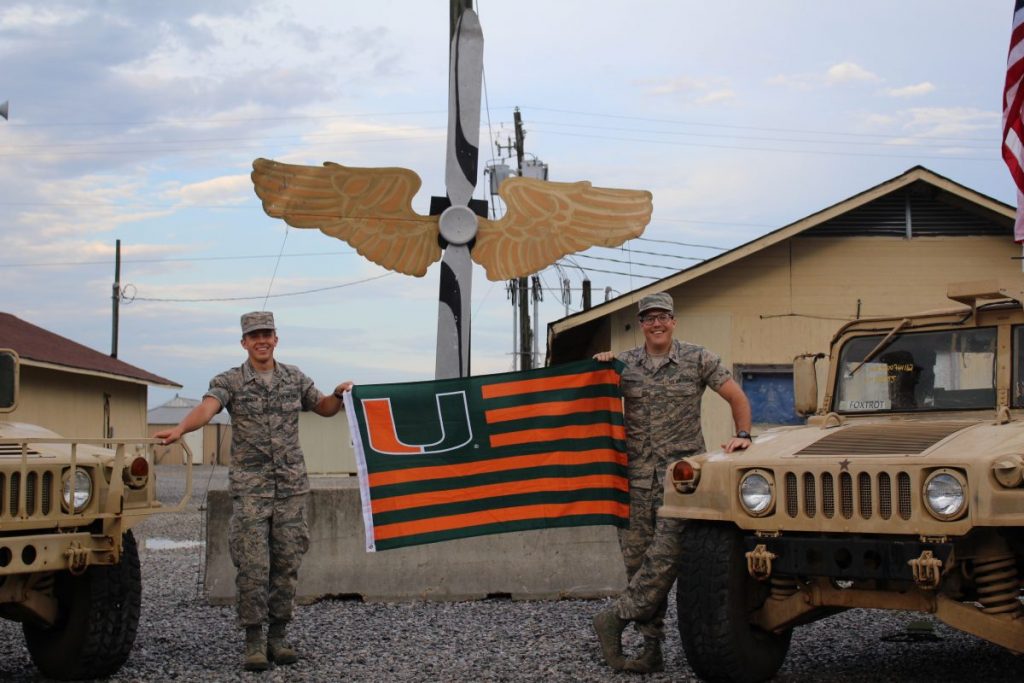 Currently, White, Kopacek and Miller are in their final semester of ROTC and are nearing the end of the program. Looking back, Kopacek said he believes that his college life greatly differed from others because of ROTC.

“For us, it’s like we go underwater for at least Tuesday through Thursday because that’s when we have our ROTC stuff where we just have to hold our breath,” Kopacek said. “On Friday, it’s like we can breathe again. By Thursday, you’re just drained.”

White echoed this, saying that “naps are a key.”

When finals come around, White and Kopacek agreed that it is probably the least stressful time for ROTC students because they don’t have their morning training.

“What a lot of people don’t understand is that, yes, we’re getting up early,” White said. “But there’s also a lot of planning and extra work that goes into the daily activities that we do for ROTC during the week.”

But for Miller, she said she feels as if her college experience was quite normal. Aside from ROTC and her classes, Miller is president of UM’s chapter of Delta Sigma Theta and a part of United Black Students.

“There’s occasional times where I had to get up a little bit earlier in the morning, but that could just be some kid going to the gym to get his gains,” Miller said. “I think I was able to fully take advantage of the opportunity that I had coming to a normal school and still pursuing the military.”

Overall, all three cadets said that they can agree ROTC has taught them skills that they would not have gained from a completely normal college experience such as leadership, time management, professionalism and public speaking.

Capt. Pigford can attest to all the skills that can be learned through the program.

At the end of the semester, after their commissioning ceremony, White, Kopacek and Miller will all become second lieutenants in the Air Force. However, they will all go into different roles.

White will go into the Air Force as a pilot, where he will have to do two years of training before serving for a minimum of 10 years. However, White plans on staying in the Air Force for longer than his required time and said that the day he got his pilot position was “one of the best days.”

“It was such a good feeling. I cried,” White said.

For Kopacek and Miller, they see a different life after they serve their time in the military.

Kopacek originally received a pilot position after graduation. However, he realized that that wasn’t what he wanted to do and switched to a cyberspace officer position, where he will only be required to serve for four years.

“This is my temporary job. I’ll do that for four years and then go to med school,” he said. “That’s the goal.”

Miller will become a combat systems officer, someone who sits behind the pilot on the plane and helps with controls. Her required time is two years of training and six years of active duty.

For Miller, she said she doesn’t know if she wants to stay in the military for a total of 20 years or only serve what she has to, but she knows she wants to pursue her other passion, which is entertainment.

Both Miller and Kopacek said that one of the most important aspects of their life is family, and serving a full 20 years might make it difficult to have one.

While the future might be uncertain for these three cadets, they can attest that ROTC was a life-changing experience, and through all the 6:30 a.m. drills, they would not change a thing.