Miami baseball primed for success in 2020 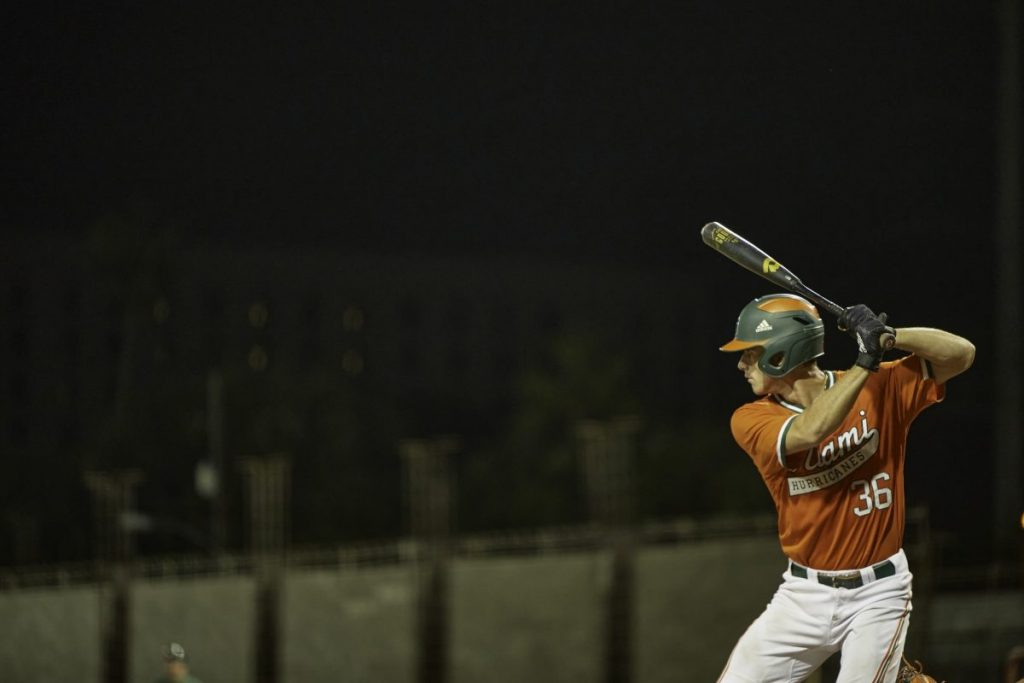 What a difference one year makes. Last spring, the Miami Hurricanes were trying to find a way to at least partially reclaim former glory, after the once proud program had missed the NCAA Tournament for the second year in a row. Unlike last year, rather than having to rebuild a roster with freshman and sophomores, second-year head coach Gino DiMare will return almost the entire starting lineup. With eyes on TD Ameritrade Park in Omaha, Nebraska, a place the Canes were once regulars but haven’t been since the 2016 season, DiMare and his team will try to take care of unfinished business.

“It’s an unusual team because a majority of our team is back from last year,” DiMare said. “At this point in their careers, they all should be developing. “It’s a good balance of freshmen, sophomores and juniors.”

Coming in the top 10 of almost every major college baseball poll, the expectations of this team are sky high. Miami is ranked No. 3 by D1 Baseball, No. 4 by Collegiate Baseball, No. 5 by Baseball America, No. 5 by NCBWA, No. 7 by Perfect Game and No. 7 in USA Today preseason baseball poll.

“The expectations are where they should be at Miami, where everyone expects us to get to Omaha and have a chance to win,” DiMare said.

But for the team, preseason accolades mean nothing until the end of the season.

“It has the word ‘pre’ in front. So it doesn’t really mean anything right now,” Del Castillo said.

However, the players understand the importance of having a team with experience.

“Everyone has been in those pressure situations,” Van Belle said. “Just having that experience makes a huge difference compared to people coming in freshman year and not knowing what to expect when you get to those situations.”

Toral knows that the team has to put last year behind them and focus on this season.

If there was any question that the Canes faced heading into the 2019 season a year ago, it was how DiMare would revive the team’s hitting, after Jim Morris’ legendary career ended in disappointment.

But from 2018 to 2019, the Hurricanes exponentially increased their home run total from 23 to 85, their total runs scored from 259 to 459, and their overall batting average from .257 to .290. It’s safe to say that questions of hitting capabilities have changed heading into 2020. 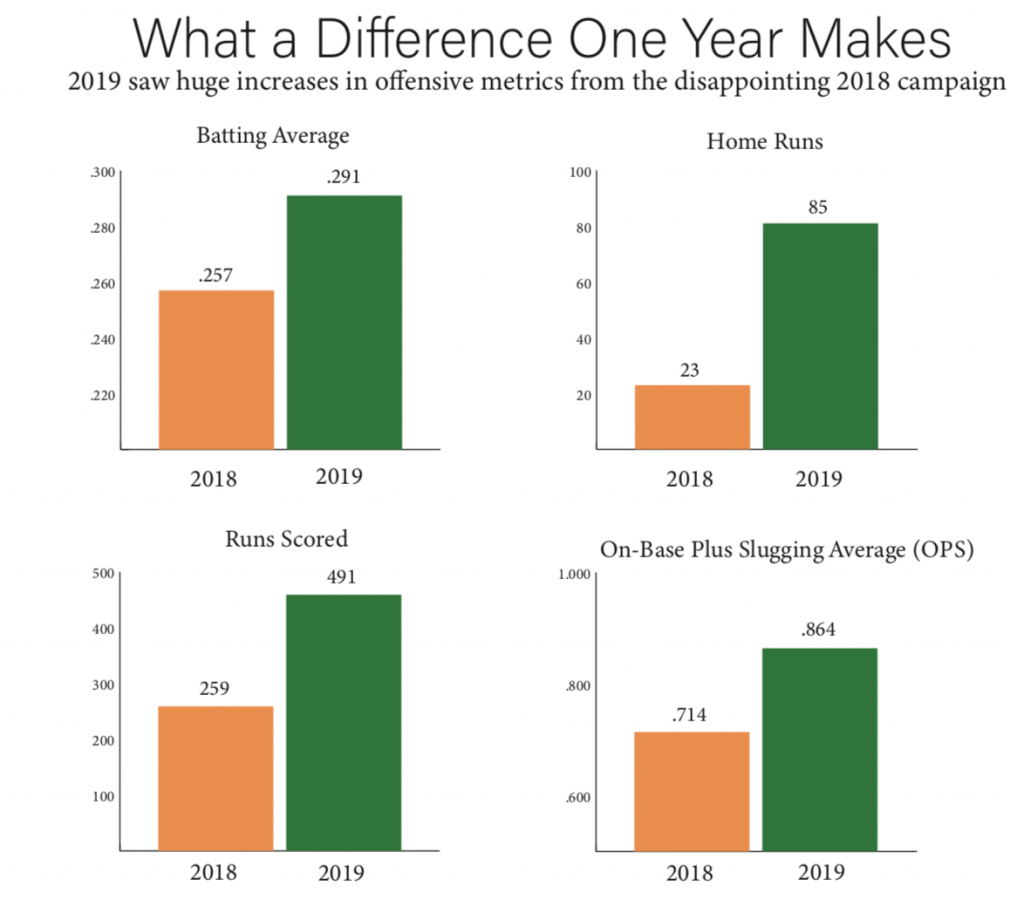 No longer is offense the major concern. Instead, pitching, specifically the bullpen, will be the biggest question.

UM lost two key arms from a year ago in Evan McKendry and Greg Veliz, after both right-handers were selected by the Tampa Bay Rays and Los Angeles Angels organizations. But that doesn’t mean the starting rotation will be short of dominant arms in 2020.

On the contrary, DiMare is already showering high praise on his likely weekend starters.

“We have three guys that could arguably be Friday guys in Van Belle, [Slade] Cecconi and [Chirs] McMahon. They all pitched well in the fall, but I have to tell you, I feel good about whoever goes.”

Assuming that the three core starters can stay healthy all year, the rotation will be one of the most potent in the nation. Miami boasted a 3.84 era last season, good for second-best in the Atlantic Coast Conference, and Van Belle, Cecconi and McMahon alone combined to allow a robust 3.70 ERA.

Junior Daniel Federman will take over as Miami’s main bullpen guy, with last year’s main closer Veliz not returning for his senior year.

“The bullpen is always the hardest thing to figure out, because matchups, lefties and righties, trying to figure out long guy, short guy, all that stuff,” DiMare said. “Federman should be the guy at the end, and then anyone between the starter and him, we have ideas about who they are, it’s just what roles will they be in the bullpen.”

Part of the bullpen question will depend on who earns the midweek game starting job. DiMare hopes that freshman Alex McFarelane can handle that role, and will use senior Tyler Keyson as a key reliever that will add experience to the bullpen. 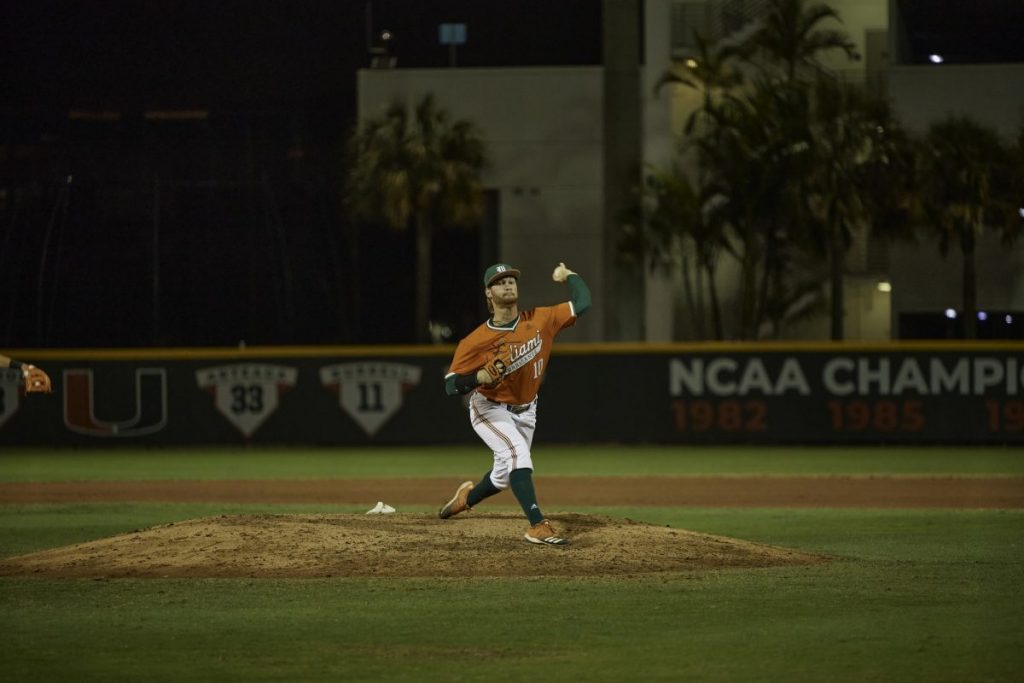 At the plate, the sophomore class is expected to pick up right where they left off.

Sophomores Del Castillo, Jordan Lala, and Anthony Vilar played a big part in Miami’s renaissance a year ago, and their efforts will be critical in 2020.

“Those are very mature guys. We had four, sometimes five [freshman last year] in the lineup. I thought some of them were more mature than some of our older guys,” DiMare said.

The junior class will also be heavily relied upon. Toral, Raymond Gil and Tony Jenkins saw their batting averages spike by an average of .088 percentage points, while Gil’s home run total increased from three to 13 between his first two seasons at Miami. Toral saw an even bigger jump, from one to 23.

With so many sophomores and juniors expected to play a role, it may be easy to overlook Miami’s freshman class. But below the surface, the younger players will be very capable of playing important roles, especially catcher Jared Thomas.

“Thomas is a freshman we think highly of. He has played very well for us this offseason,” DiMare said. “We have to find a way to get that guy in the lineup because he is a tough kid, that can swing the bat really well, and he’s looked very good behind the plate too.”

The only other concern that DiMare raised was the defense.

“Our defense has got to be better, it was not very good last year. That’s something that certainly stands out to me,” DiMare said.

Last season, his team committed 88 errors in the field, with a fielding percentage of .961, second to last in the ACC.

Miami will be faced with one of the nation’s toughest schedules this season, where they’ll face No. 3 Louisville, No. 4 Florida, No. 12 Florida State, No. 15 Duke, No. 19 Georgia Tech and No. 23 North Carolina, all in three-game series.

The team will kick off the 2020 season in a three-game series against Rutgers on Feb. 14 at Mark Light Field.