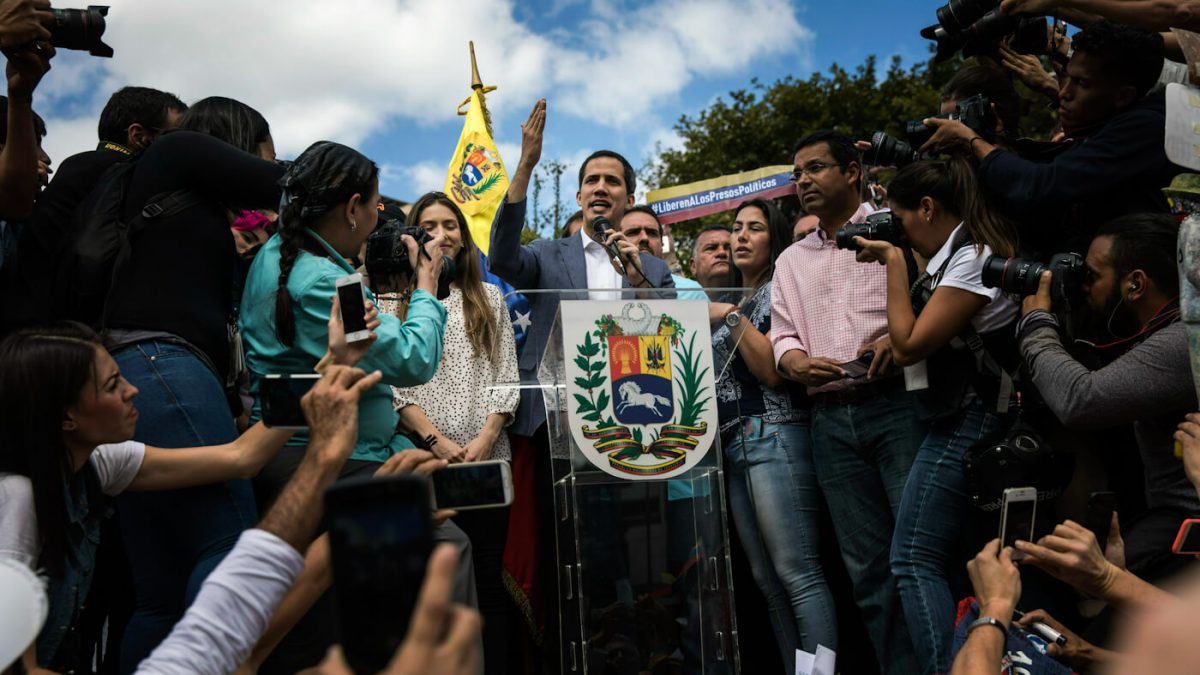 Michel Pinard, along with about 3,500 others, visited the Miami Convention Center, to see the Venezuelan interim president Juan Guaidó Saturday, Feb. 1. His mom cried and Pinard stood and listened to the leader speak with awe, inspired by Guaidó’s message of hope.

Like many other Venezuela students, Pinard, a junior at the University of Miami majoring in international relations and Latin American studies, has struggled with seeing his home country be torn apart and family members like his aunt in Venezuela suffer. Seeing Guaidó speak in the midst of this was a moment of inspiration, Pinard said.

“[Guaido] is in a lot of danger when he goes back to Venezuela. Seeing a person risking everything for the greater good of the country, that’s something that moved a lot of people including myself,” said Pinard, the vice president and treasurer of UNIVEN, UM’s Venezuelan-student organization.

Venezuelan students at UM watched anxiously about a year ago when it looked like the socialist President Nicolás Maduro might be ousted from power by opposition leader Guaidó.

Maduro, president since his predecessor, Hugo Chavez, died in 2013, was seen by many in the country as an authoritarian leader who caused the country’s economic collapse.

Perhaps, students thought, Guaidó could end the rampant human rights violations and failed economic policies that had turned the nation with the world’s largest oil reserves into a country where minimum wage is now less than $15 a month.

Perhaps, they thought, Guaidó, who had declared himself the country’s new president on Jan. 23, 2019 with the backing of the United States and 53 other nations, could stem the exodus of Venezuelans who had fled the country in unprecedented numbers over the past decade.

But a year since Guaidó’s leadership spurred hundreds of protests throughout Venezuela to demand change, Maduro remains in power, and last month he began the second year of his second six-year term.

“With the Guaidó situation, I see no progress,” said sophomore Eglantina Brewer. “There is a lot of talk, but no action; we don’t even know where he is. It is devastating to see such a beautiful country rich in culture, petroleum and resources be destroyed,” Brewer said.

The protests, which initially attracted thousands, continue, but without the throngs of Venezuelans who previously participated, even though Guaidó and his opposition party keep reminding his followers that life should not be the way it is.

Poverty, corruption, water shortages and continuous blackouts forced millions to leave the country. There may be as many as 6.5 million Venezuelans living outside of the country, according to a Brookings Institute analysis released in early December.

A lot of people leave Venezuela without the possibility of going back, said junior Ignacio Anzola, one of about 130 Venezuelan students at UM.

Anzola said he and his family left the country in 2012.

“What made it impossible to live there was the lack of security,” Anzola said. “My family was held at gunpoint in various occasions because they wanted to steal our phones or watches; it was ridiculous and frightening.”

“Thankfully, we left at the right time; we didn’t experience any week-long blackouts like they did earlier this year. And even though there were still product shortages in the supermarkets, we could still find things to eat; now that is not even an option,” Anzola said.

Over the years, Venezuelan students at UM have helped raise money to send to needy families in Venezuela. They have participated in local demonstrations that called for Maduro to step down. At the beginning of the year, it seemed that Maduro’s days in office were numbered, given U.S. oil sanctions and international support for Guaidó, who attended the State of the Union address Feb. 4 in Washington, D.C. and received words of support from President Trump.

But despite the outside support, many students said that the situation is far from resolved; conditions in Venezuela continue to deteriorate while Maduro remains in office.

“To me, the most heartbreaking part of the situation is that people built their lives there, and they had to leave it all behind,” said senior Patricia Infante. “My dad built his business dream there from a very young age and he had to leave it behind because we had to migrate.”

Though Guaidó has not been able to force Maduro from power, Infante said she does not fault the 36-year-old leader.

“I feel sorry for him,” she said. “He has sacrificed so much, he is a fighter and very courageous,” Infante said. “He is just one person, and we cannot put all of the responsibility into one person; it is up to us, the Venezuelan people, to contribute and be present as well.”

But students still describe the situation as heartbreaking. Many say they have family in the country and worry about them every day.

“Venezuelans have a very strong sense of identity and community,” Brewer said. “For me what is the most heartbreaking part of it all is that I cannot live the Venezuela my parents and grandparents lived— happy and secure.”

Anna Timmons contributed to this reporting.