“Where my mother f*cking hotties at?”

A night that, only three hours before, started with a star-studded red carpet featuring athletes such as Derwin James of the Los Angeles Chargers and Jarvis Landry of the Cleveland Browns and entertainers including Sarunas Jackson of HBO’s “insecure” and “106 & Park”/E! News’ Terrence J was just getting started. 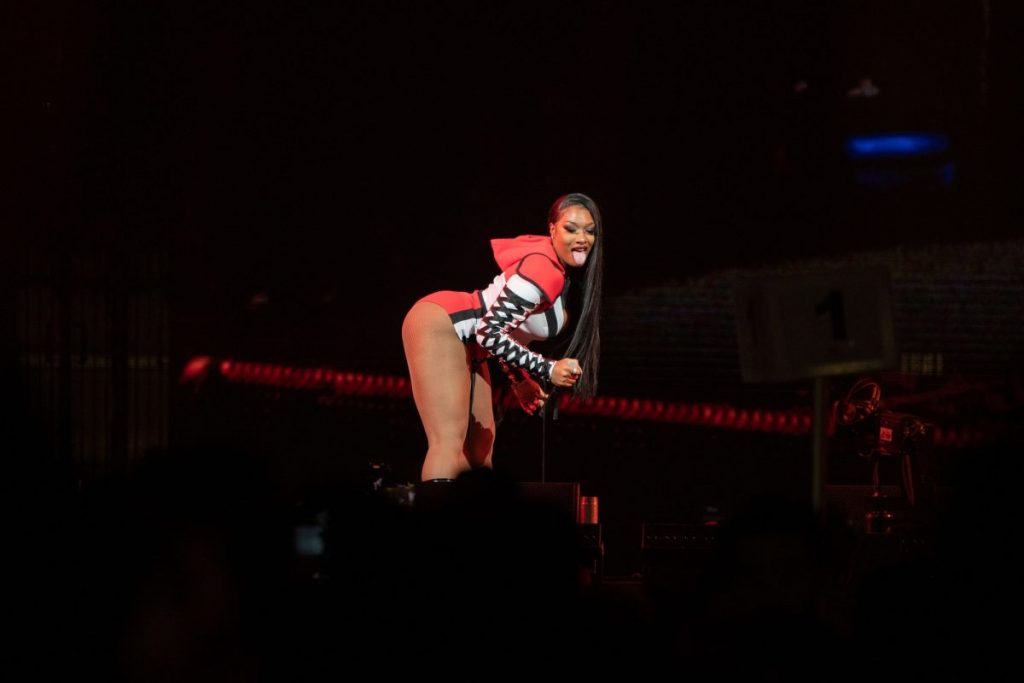 Megan Thee Stallion captivates the crowd with her performance during the Super Bowl Music Fest at the American Airlines Arena on Jan. 30. Photo credit: Jared Lennon

At 9:15 p.m. sharp, the lights dimmed. A stadium that was once filled with empty red seats turned into a sea of people– white, black, old and young.

“Where my mother f*cking hotties at?” rapper Megan Thee Stallion asked again, taking the stage on Jan. 30, day one of the Super Bowl LIV music fest.

“I keep it realer than real / F*ck all the critics and f*ck how they feel,” she started, opening with “Realer”– the lead single from her 2019 debut mixtape “Fever.”

“I’m getting money it is what it is / They wanna know how I did what I did,” she continued, bringing the immediate, uncomparable energy often seen in her videos to the American Airlines stage.

Megan’s spirit was contagious, with the audience never missing a beat as she transitioned into “Freak Nasty,” a song from her 2018 extended play “Tina Snow” which features the song “Big Ole Freak” that launched her to stardom.

In true Stallion style, the rapper wore a red, white and black hoodie/shorts combo that perfectly hugged every curve and allowed her signature twerk skills to take center stage. She performed against a rather plain background that alternated between imagery from her music videos, Texas (the star’s home state) memorabilia and big, gold letters that simply read “Megan The Stallion,” as if anyone needed a reminder.

“Where my bad b*tches getting money at?” she asked the crowd. “If you know you don’t need a man for nothing, make some mother f*cking noise.”

And that they did.

Then came the moment we all knew was coming: the twerk interlude. Two groups of audience members, hot girls and hot boys, made their way to the stage to dance to her twerk anthems “Simon Says” featuring Juicy J and “Big Booty” with Gucci Mane.

“Simon says bust it open like a freak.” The lyrics radiated throughout the stadium.

You know the rules: Simon said it. So, they did it– busting it open and throwing it back as if their lives depended on it while the entire crowd cheered them on.

After a brief intermission featuring announcers from 99JAMZ and songs including Pop Smoke’s “Dior” and Afro B’s “Drogba,” another voice spread across the arena, engulfing every audience member effortlessly. 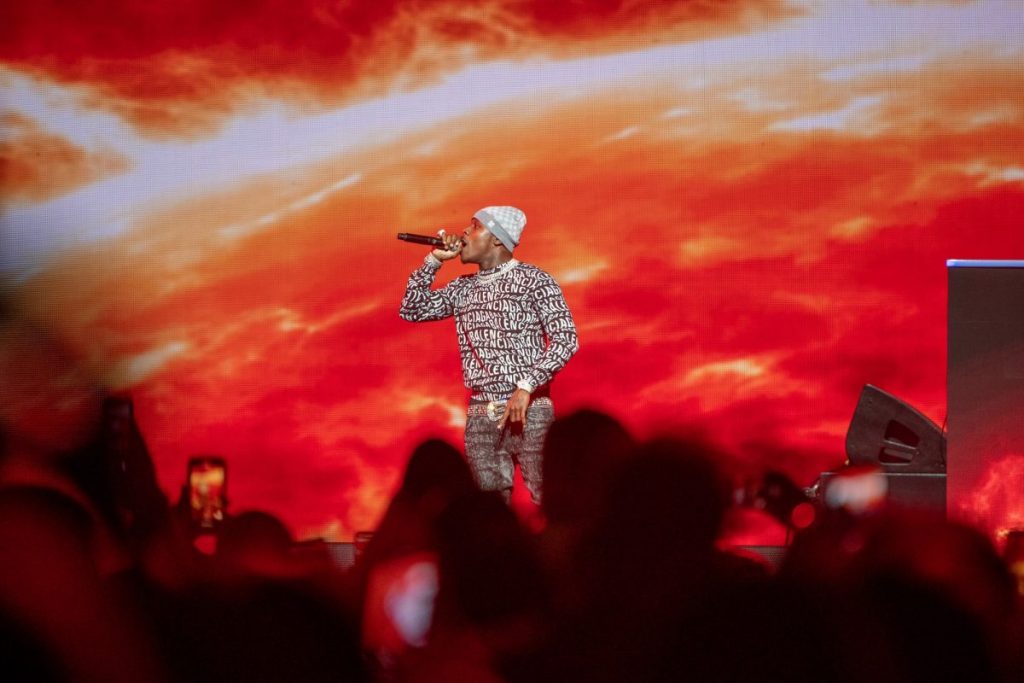 That, followed up with the tagline “That ain’t the baby, that’s my baby,” let everyone know what was coming. And if you didn’t know, well, you were about to find out.

Rapper DaBaby burst onto stage with an energy that almost rivaled Megan Thee Stallion’s, performing “Suge,” the song that put him on the map early last year.

He wore a beanie and matching sweatshirt, but my eye was immediately drawn to the belt around his waist and chain hanging from his neck– both so iced out I could see the glare from section 117.

The smell of freshly-wrapped blunts being lit that, up until then, had only played a minor factor, now spread so much that it was the only smell worth mentioning, even more than the stench and desperation of canned beer and cheap cologne. To say that people were having a good time would be the understatement of the year.

He followed up with his next hit, “Baby on Baby,” accompanied with…real babies. Well, blow up ones that I’m assuming housed real, adult human beings inside them. It was weird, but I was here for it.

DaBaby performed other hits such as “INTRO” and “VIBES” from his most recent album “KIRK” and “Babysitter” from his previous discography, accompanied with lighting that alternated between blue, pink and purple and visuals that varied from fire to outer space. The backdrops, much like the ones before his, were simple. But, with an energy as untouchable and stage presence as captivating as DaBaby, simple was more than enough.

For the remainder of the set, the North Carolina rapper made his way into the crowd, bringing out friend Stunna 4 Vegas to perform their song “TOES” along with a few of Vegas’ own records.

“I need everybody in this b*tch to put one fist up,” DaBaby said. An obvious ode to the viral music video (featuring iconic 2010s dance crew Jabbawockeez) for “BOP,” the audience knew exactly what time it was.

The once pink and purple lights turned to red, and the bass seemed to shake the entire arena– mimicking the absolute chaos that was about to ensue.

“I needed some sh*t with some bop in it,” he started. The audience went crazy as DaBaby performed the song not once, but twice.

After another brief intermission, the room went dark. The “EA Sports” logo that had taken center stage was replaced with black and white footage documenting rapper Meek Mill’s life, everything from his court case to his performances. 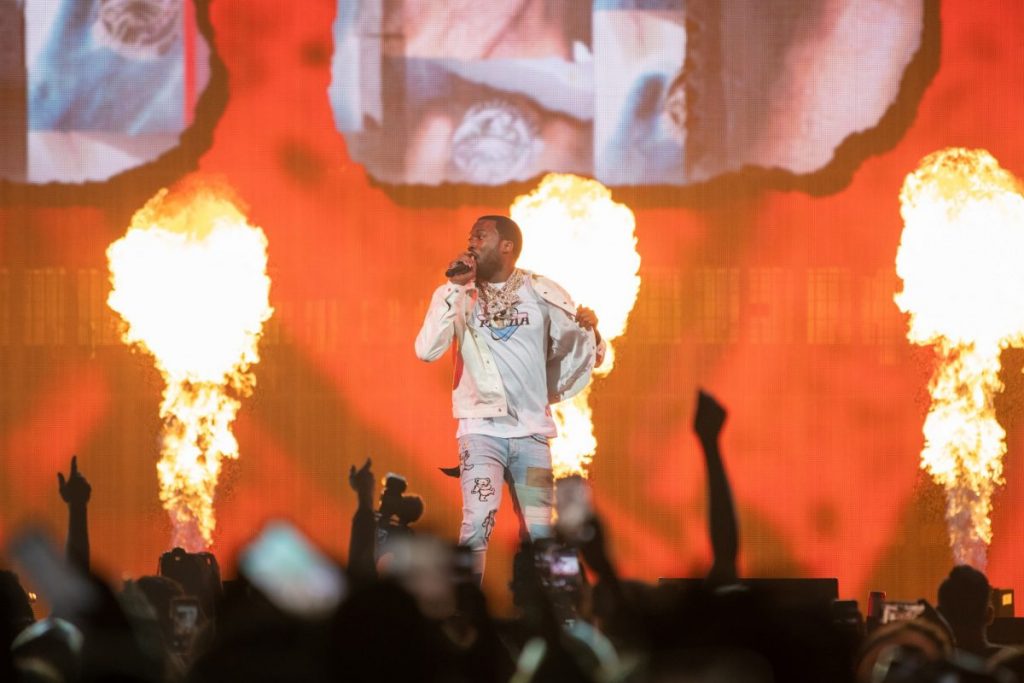 His visuals were the most decorated, ranging from grayscale to color, from images to text, from smoke to fire.

Meek jumped around his discography, which was expected as he has not released new music in quite some time. He performed hits such as “Tap” with NAV, “Going Bad” with Drake, “You Stay” with Dj Khaled and “All Eyes on You” featuring Nicki Minaj. That last one struck me as quite comical, given the viral run in he had with his ex-fiance and her husband just last week. But, the song’s a banger– what can I say?

The rapper had some surprises up his sleeve, bringing out special guests Yella Beezy, Tory Lanez and Gunna, all in town for other Super Bowl festivities.

I am not Meek Mill fan, but I seemed to be the only one. Everyone surrounding me seemed to know every lyric of every song and went hard with every beat drop.

I, on the other hand, was only captivated by roughly three minutes of the performance. His delivery of “Dreams and Nightmares”– his biggest hit to date and absolute integral part, dare I say backbone, of every black party since its release in 2012– was everything I had been practicing for since coming to college.

Complete with confetti, smoke and fire, Meek left it all on stage. The perfect ending.

“If you f*cking with me, make some noise in this b*tch!”

The last act of the night was Dj Khaled and friends, emphasis on “and friends,” and it came with plenty of surprises. 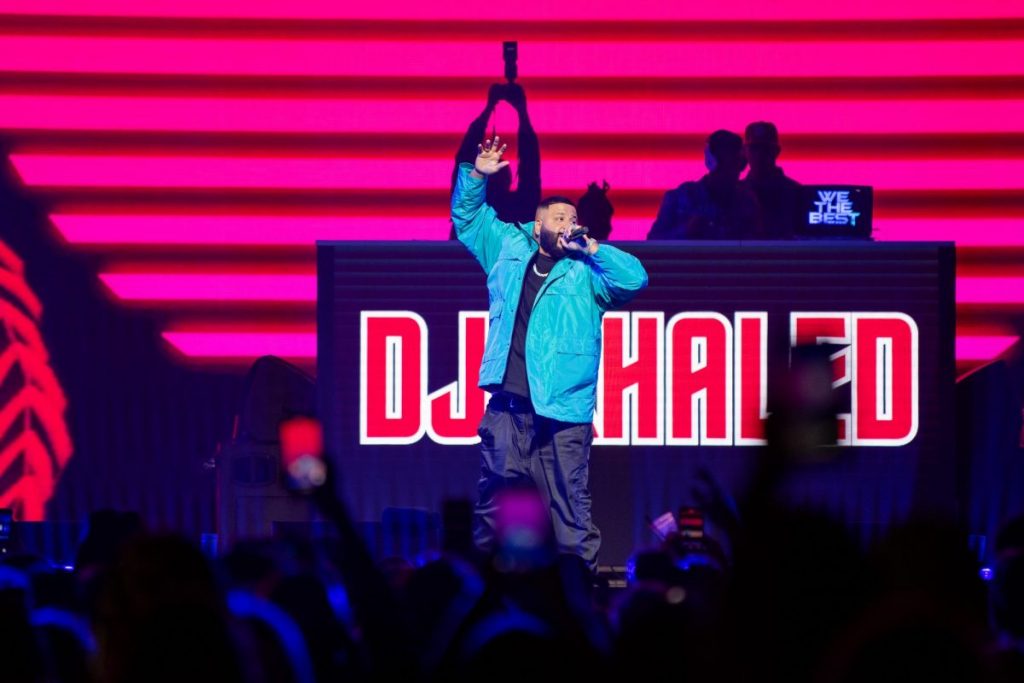 DJ Khaled hypes up the crowd during his performance during the Super Bowl Music Fest at the American Airlines Arena on Jan. 30. Photo credit: Jared Lennon

Almost immediately after stepping on stage, Khaled was joined by rapper Rick Ross to perform major throwbacks like “I’m on one,” “All I do is win” and “B.M.F.”

“Miami are you ready,” Khaled asked.

“Miami, ARE YOU READY?” he asked again.

We all thought we were, but we were wrong.

It is not an exaggeration to say that everytime I so much as blinked, Khaled had brought out a new guest. And friends was right.

Other guests included 2 Chainz, Yo Gotti, Fabolous and Lil Wayne. And with each new performer, the crowd grew more energetic, despite it being almost 1 a.m. 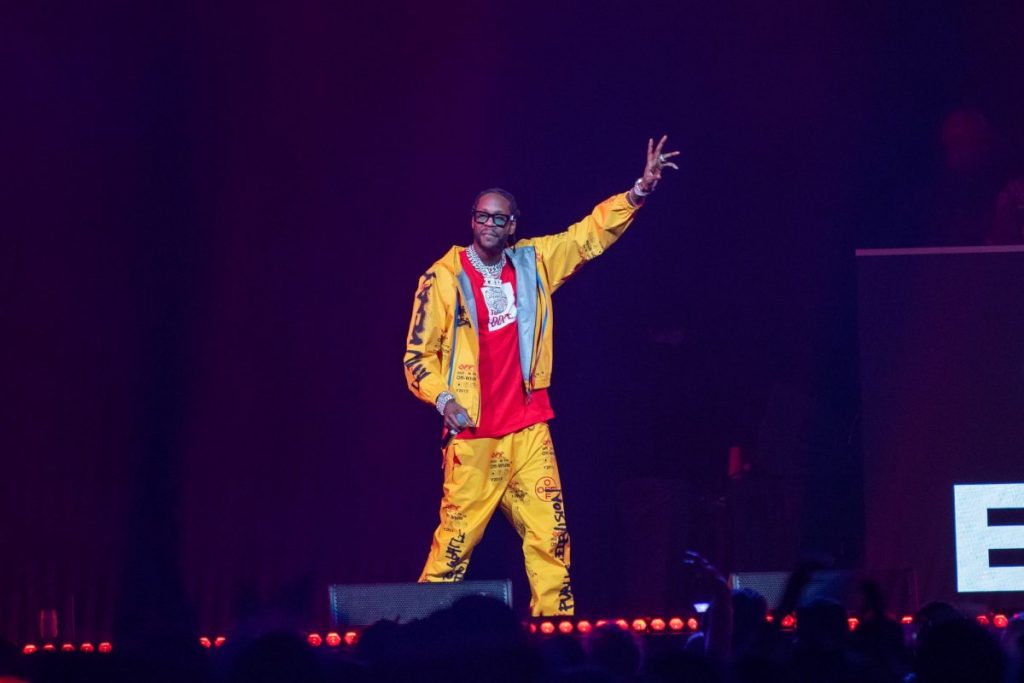 2 Chainz waves to the crowd after being brought out to perform by DJ Khaled during the Super Bowl Music Fest at the American Airlines Arena on Jan. 30. Photo credit: Jared Lennon

“RIP Nipsey Hussle. RIP Kobe Bryant and Gianna,” Khaled said before his last song of the night. “Put your hands in the sky. We’re gonna do this for Kobe, Gianna and Nipsey.”

Khaled told his team to turn on all the lights, and so they did. This last song was no big spectacle. It was a beautiful feel-good moment celebrating fellowship and paying tribute to those gone too soon. It felt fresh, pure.

What I expected was a sub-par performance of obscure Dj Khaled songs I did not know nor did I care to know. What I got, was a revolving door of everyone who was anyone in the late 2000s/early 2010s hip hop scene (and Migos). And I was absolutely living for it. 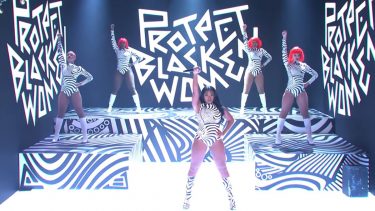