Jarryd Yun was 9,000 miles away from home, just north of Sydney when news of catastrophic bushfires caught the attention of American media.

While abroad, he kept a close eye on the damages caused by wildfires ripping across much of his country, mostly in the southeastern states of New South Wales and Victoria. Images of roaring flames and scorched wildlife went viral on social media virtually overnight. However, the comfortable distance between Yun and the fires ceased to exist when he returned from the states.

“What really hit me was when my plane was landing and seeing the smog that these fires have created,” Yun said. “I couldn’t see my house from the plane like I usually could. I guess that sort of put me into the reality of things here.” 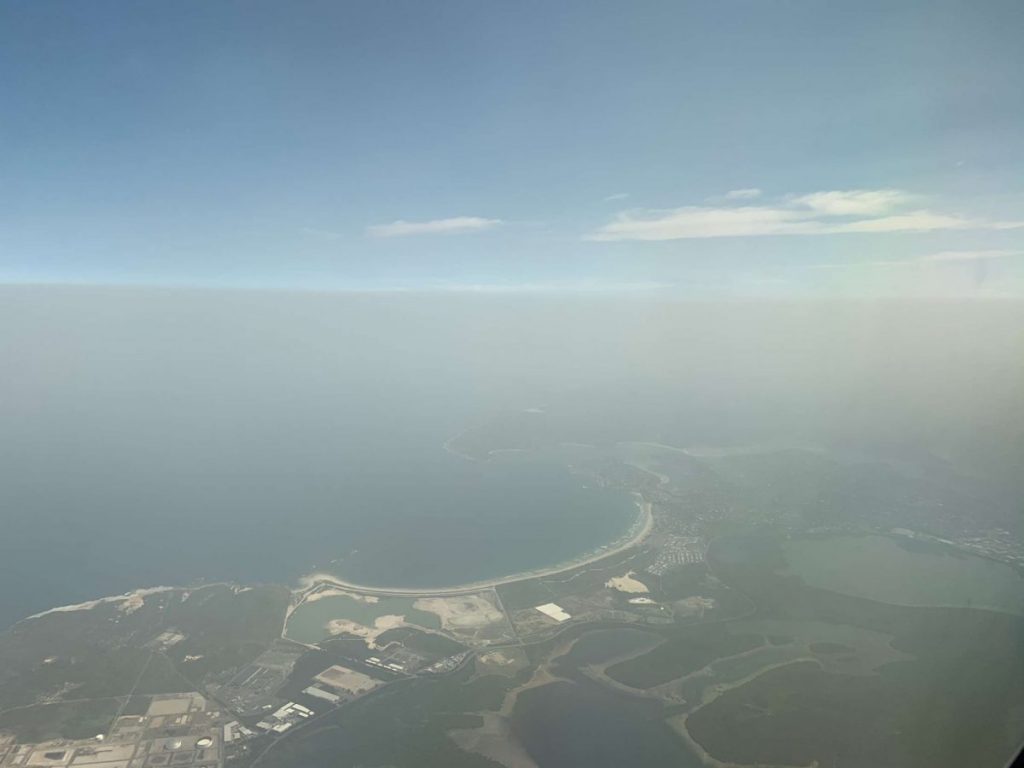 The smoke covering the Australian landscape is a result of the massive, nationwide bushfires that have raged across much of Australia for several months. Photo credit: Jarryd Yun

Air quality has become a serious concern in many parts of Australia. “There is a constant smog about which looks gross and blocks the sun,” Yun said.

He compared the air quality to that of China, where Yun vacationed as a child. The country is known for its dangerously high levels of air pollution, which poses a great health risk to many people in the country.

Recently in Melbourne, dust in the air caused brown rain to fall from the sky.

For Yun and many others around the world, the Australian bushfires have been devastating. The scope of the cataclysmic natural disasters is record breaking in many ways; Australia is being ravaged by the worst wildfires seen in decades.

Over 25 million acres of bush, forest and park space across Australia have burned, 46 percent more than what burned in the Brazilian Amazon last year. In addition, an estimated one billion individual animals have died over the past several months. 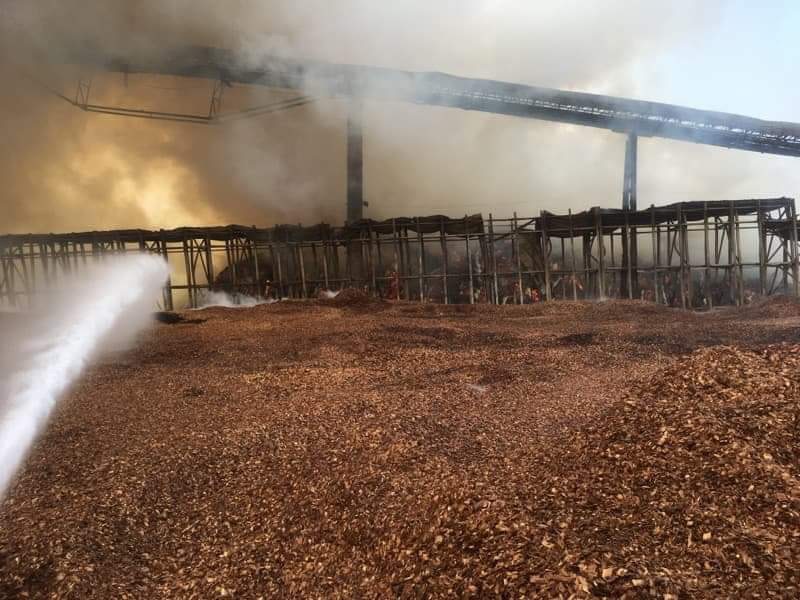 A firefighter volunteer witnessed harsh bushfire conditions in Eden, Australia, where the blaze spread to an industrial location. The bushfires have affected much of the country's southeastern states. Photo credit: Jarryd Yun

“The stories about the koalas have been particularly devastating because koalas are already a threatened population,” said Catherine Chase, a senior UM Global Ambassador who studied abroad in Sydney during the fall of 2018. “I think they’re such an amazing symbol of the country,” said Chase, who is majoring in public health and microbiology.

It is unclear yet whether or not koalas are functionally extinct, meaning that they are unable to reproduce on their own in the wild. Close to one-third of the wild koala population has perished in the fires according to an estimate by Australia’s minister for the environment, Sussan Ley.

Despite the damage already done, the majority of flames have yet to be contained, and there are still several weeks to go until the bushfire season ends. Stories of strained firefighter volunteers who work without pay, overwhelmed wildlife rescue groups and farmers that have been forced to kill their livestock have shed light on how dire the situation has become. 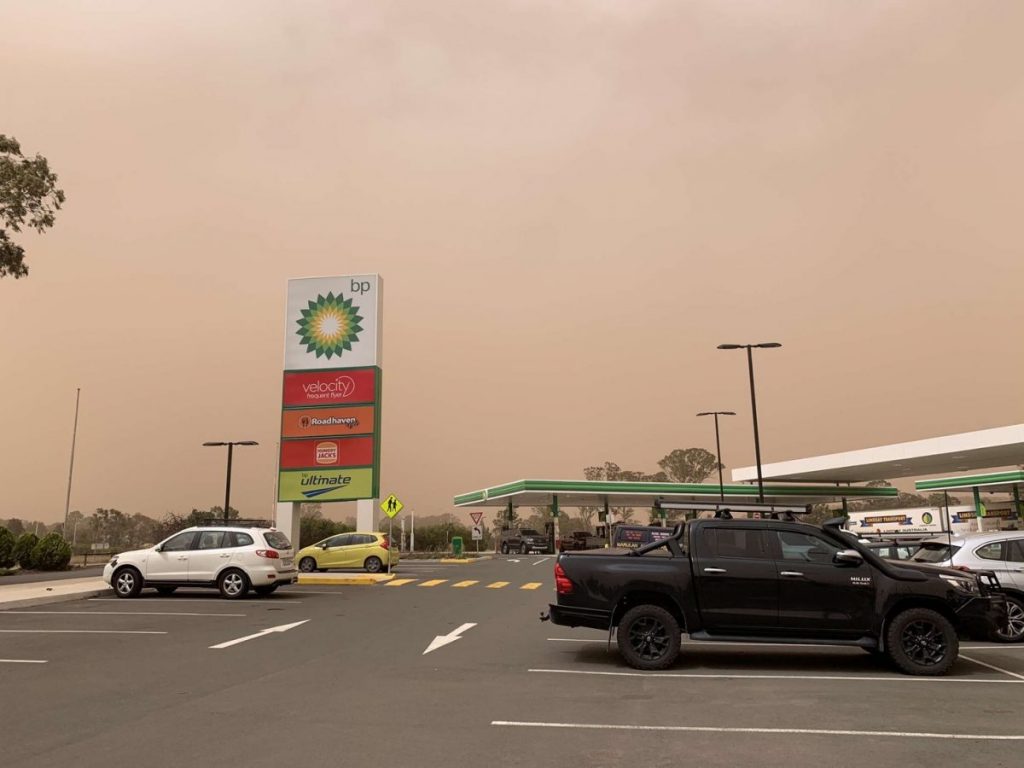 Despite heavy rain in parts of New South Wales over the past week, residents were warned that the worst of the bushfires may have yet to come.

Luckily for Yun, his family has not been directly affected by the flames, but not everyone has been as fortunate. To date, some 28 people have died so far since September, and nearly 2,000 houses have been destroyed. Fire crews predict that conditions will soon worsen as temperatures continue to rise, forcing more individuals to leave their homes, unsure of what they will find when they return.

Bushfires are a year-round phenomenon in Australia, usually peaking during the summer months when temperatures increase, rain becomes more scarce and winds strengthen. However, recent fires have caused unprecedented amounts of demolition due to an extreme drought season and record-high temperatures around the globe; 2019 went down in the books as the second hottest year in recorded history.

Much of the natural Australian landscape is prone to fires, such as eucalyptus forests and hummock grasslands, which are particularly flammable. Higher temperatures and prolonged droughts have caused soils to dry out much faster than usual, leading to an extended, more severe fire season.

Climate scientists and environmental groups across the board blame global warming for the severity of the blazes. Greenpeace and Extinction Rebellion are urgently calling for governments to declare a climate emergency as episodes of catastrophic natural disasters around the globe become more frequent. For the most part, however, they have faced pushback and inaction from world leaders.

Chase recently returned to Sydney and noted that the attitude of the Australians towards prime minister Scott Morrison has not been positive.

“They’re really disappointed in him. They have been calling him ‘ScoMo,’” she said.

“ScoMo” is a slang term that refers to a person in charge who leaves things to others when a difficult or emergency situation arises. This term was coined after Morrison flew to Hawaii to vacation in early January, just days after declaring a national disaster. Morrison has been tepid in acknowledging the role of climate change in fueling the blazes.

“Because these fires were so large, it released a lot more CO2 than normal, altering the natural cycle of carbon by adding more [carbon dioxide] to the atmosphere,” he said.

The fires have unleashed about 900 million tons of carbon dioxide, meaning more sunlight will be trapped under the atmosphere by greenhouse gases. As a result, the world warms up, changing the natural cycle of climates around the world and resulting in more frequent, atypical natural disasters.

The effects of the fires on the environment are already being noted. Smoke particles settling on glaciers in New Zealand are causing the snow to darken, reducing the reflectivity of snow and allowing it to absorb even more sunlight. More sunlight absorption leads to increased glacier melt, which contributes to world-wide sea-level rise.

But Australia is not the only nation that needs to worry about how its air quality will be affected by the ongoing flames; the smoke has already traveled to surrounding countries, deteriorating air quality and changing their natural weather patterns. A satellite picture of smoke traveling from Australia to Chile that recently went viral demonstrated the extent to which these fires are already taking effect globally.

Biodiversity loss in Australia as a result of the fires has caught a considerable amount of international attention. Millions of dollars have been donated to wildlife rescue and charity organizations working to save and care for Australia’s birds, mammals, and reptiles, which have suffered due to the flames.

The scorched land will not be able to sustain life until plants begin to grow back, shrinking the habitat and reproductive range of many plant and animal species. This means a less diverse genetic pool, restricting populations of wild species from successfully reproducing.

“Change would have had to be made years ago to prevent this fire from being as damaging as it was,” Arends said. Warnings about a deteriorating climate have been clear for decades; if governments around the world started implementing policies to work against a warming planet around the 1990s, today’s fires in Australia would not be as drastic, he said.

Arends went on to say, “It is time we open our eyes and realize that we cannot stop the change that is happening now, but we can influence what change happens in our future as this climate crisis continues.”