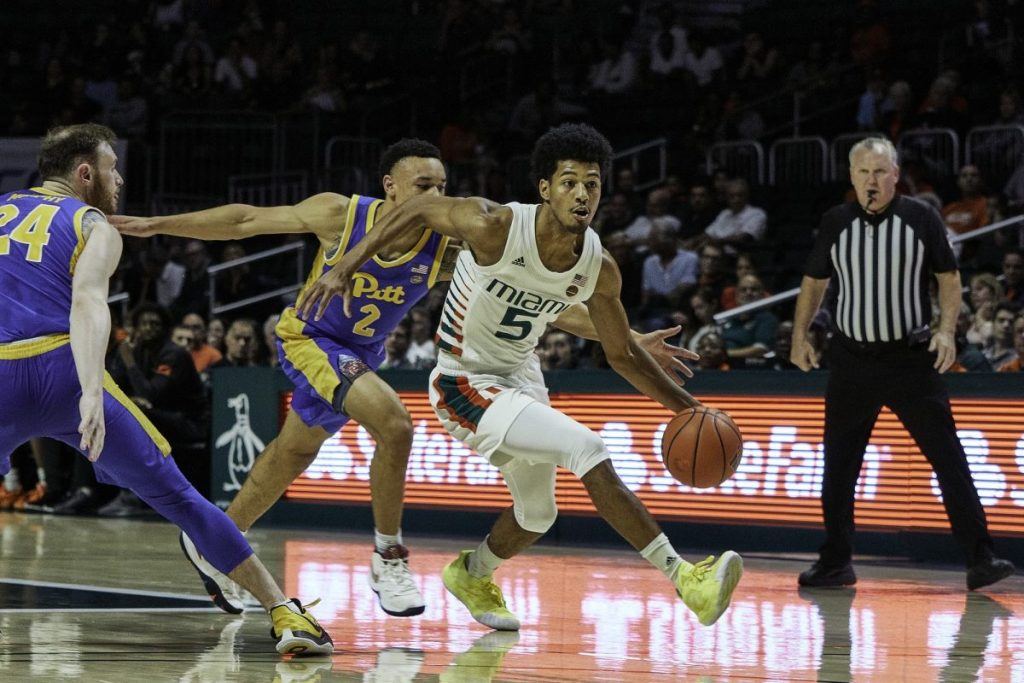 The Miami Hurricanes found themselves at a crossroads in their 2019-20 campaign. Only a season removed from a 5-13 Atlantic Coast Conference record, this year was expected to be a rebuild. Expectations aside, this is a team that has shown tremendous potential along with moments of frustration in the first two and a half months of the season. So, where does Coach Jim Larrañaga’s team stand as conference play picks up?

At first glance, this team’s 10-7 record looks fine. After all, UM spent most of the league slate last year with more losses than wins and with few opportunities to change that as they faced one daunting foe after another in the nation’s toughest conference. This year, conference play hasn’t been as kind to the Canes as their early-season schedule. Facing the likes of perennial ACC powers like Louisville and Duke has been a challenge for the Hurricanes. Sitting at 2-5 in the ACC is far from ideal, but with four of those losses coming against Top 15 teams, much has been out of Miami’s control.

Miami has established itself as a team that will shoot its way through games. They are largely reliant on their ability to create offense from the perimeter. Senior guard DJ Vasiljevic is currently third in the ACC in 3-point field goal percentage, making 43.1% of shots from beyond the arc. Junior Chris Lykes stands sixth in scoring, averaging 16.1 points per game. In terms of team marks, UM averages 72.5 points per contest, a pedestrian seventh in the ACC. While far from the catacombs in the conference, the Canes offense overall can be described as ordinary.

The defensive end of the floor has been a lingering issue for the program ever since the injury and subsequent entry of Bruce Brown into the NBA Draft following the 2017-18 season. That year, UM spent considerable stretches of time atop the national defensive rankings. Since then, however, the defense has struggled immensely. The Canes are allowing 73.2 points per game, which is second to last in the ACC and a cause for concern.

Despite some difficult times this season, Miami has proven that they have the ability to go toe-to-toe with some of college basketball’s best. The problem? They just don’t have enough of this talent. Lykes, Vasiljevic and junior Kameron McGusty all average at least 14.5 points per game. With three high scoring players and a seasoned coach, Miami is blessed with potent offensive weapons and the wherewithal to utilize them. The problem is that the Hurricanes are limited beyond this veteran guard core, with freshman Harlond Beverly—UM’s fourth highest scorer—averaging less than seven points per game. With so few players possessing a high ceiling, and with just nine scholarship players currently healthy due to a series of injuries, the entire team’s potential is limited.

Larrañaga’s team is fighting when it’s not easy to be doing so. Over the past several years, a number of factors have hurt the program’s on-court performance, many outside the realm of control in Coral Gables. Unfortunately, that doesn’t change the results of the games, and until the Hurricanes defeat a ranked opponent or win conference games with a higher level of consistency, a C+ will be all the team receives. 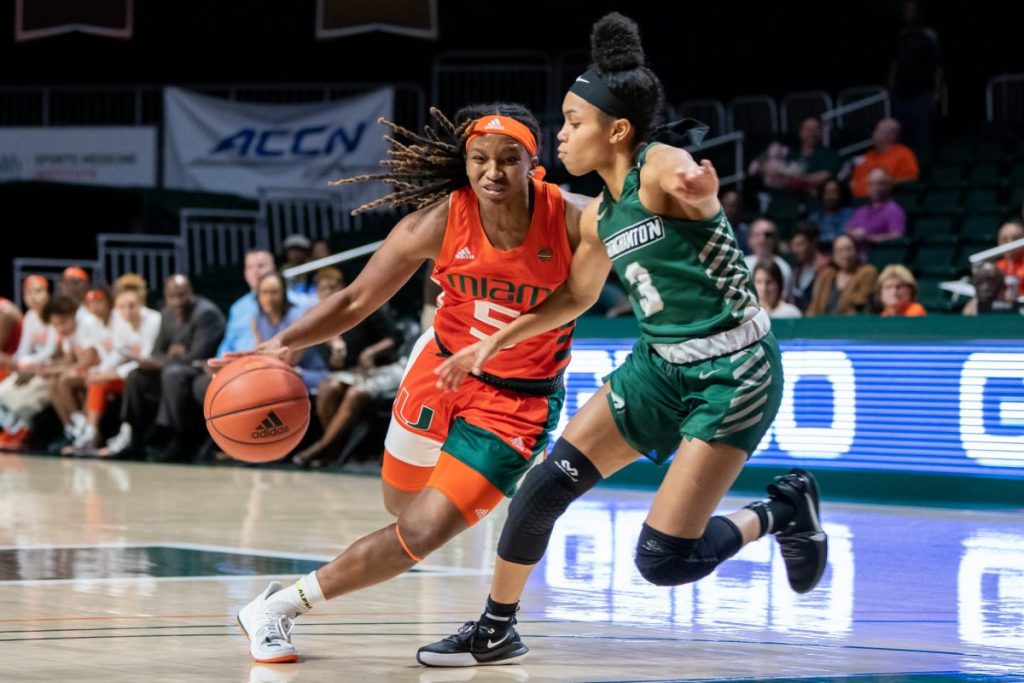 Junior guard Mykea Gray drives to the basket during the Hurricanes' victory against the Binghamton Bearcats. Photo credit: Jared Lennon

Coming off a strong 2018-19 season and returning three starters from last year’s team, Miami had high expectations coming into this season. Ranked No. 17 in the AP Top 25 poll, redshirt senior forward Beatrice Mompremier and junior guards Mykea Gray and Endia Banks were the expectant leaders of this team. Mompremier, who made the decision to return for one more year instead of entering the WNBA draft last season, was named the ACC Preseason Player of the Year.

After starting the season 4-0, Miami suffered back-to-back losses to No. 14 Depaul and No. 6 Oregon State. The start of ACC play has been a struggle for the Hurricanes, as they have only won two conference games. Miami suffered a 46-point blowout loss to No. 7 Louisville, only a few days after losing by double digits to No. 8 Florida State. A five-point victory over Syracuse has been the team’s only win in the past six games. The Canes lost their past two games to North Carolina and Notre Dame.

Miami’s offense has struggled to score in big games. The team is shooting 40.6 percent inside the arc and 30.4 percent from 3-point range. Returning players that were expected to have a bigger impact this year have seemed to struggle with the fact that they are now the main focus of every opposing team’s scouting report. Furthermore, some of the freshmen don’t seem ready to contribute yet.

One of biggest problems for Miami this season has been the absence of Beatrice Mompremier. The forward has not played since the team’s 61-54 loss to Georgia Tech on Jan. 2. Mompremier is currently listed as day-to-day with a foot injury. Without Mompremier, Gray and Banks have been forced to take on a bigger role and play out of position.

On the defensive side, Miami has struggled to guard the 3-point line against teams with multiple shooters. Miami won’t face any top ranked opponents in the second half of the season, so the team must use the rest of the season to build momentum and get recuperate after their recent rough patch.

The Hurricanes were expected to be one of the top teams this year so it’s only right that they are judged based on their potential and preseason expectations. Though they have a decent record, the Canes have had a difficult time matching up against top competition, which is why the team receives a meager C+.