The Miami Hurricanes earned a big victory Friday afternoon in their first match of 2020, where the skies proved to be more of an obstacle than the opponents from College of Charleston, as UM won by an unblemished 7-0 overall score in the opening duel match of the season at the Neil Schiff Tennis Center.

“First match, a lot of kinks,” said head coach Aljosa Piric about the day. “Every match is a tough match. We had a lot of things to deal with today, and overall, it’s always good to get a win and get the season off to a good start.”

Weather was the biggest factor in the playing conditions, starting with a rain delay which pushed the noon start time back to 1:45 p.m. A second, shorter stoppage occurred as a brief shower interrupted the first sets of the singles matches for about ten minutes. A third halt would be the shortest of the trio as the head umpire swiftly ordered play to continue. Even after each time play resumed, a swirling breeze and some stray drizzle put a damper on the otherwise pleasant 80 degree day.

“You just have to prep the guys, that they have to expect anything,” Piric said. “We had conversations with the team yesterday that the rain was coming. That’s what we talk about in practice all the time, conditions change. We focus on what we can control. Weather is certainly not a controllable.”

“The key is not losing your time, and not doing things that make you tired or lose focus,” junior Adria Soriano Barrera said. 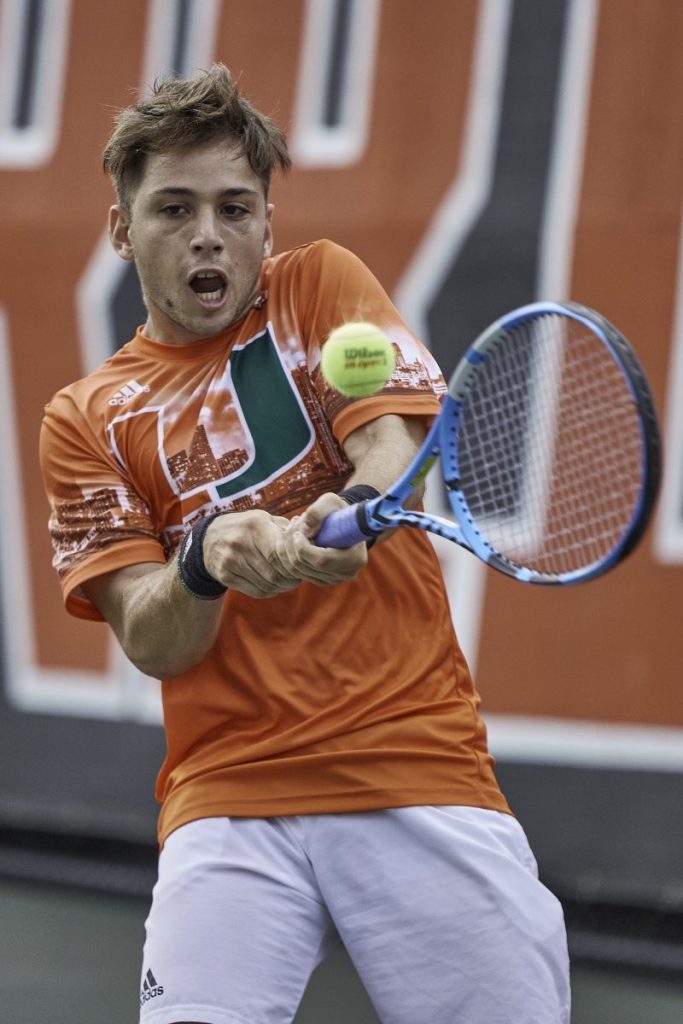 UM opened the match by clinching the doubles point without suspense, with No. 1 doubles team Bojan Jankulovski/Dane Dunlap winning 6-2 and No. 2 doubles squad Soriano Barrera/Francisco Bastias prevailing by the same scoreline. NCAA rules state that the team who wins the majority of the three doubles matches wins the entire doubles point, so the No. 3 match involving Hurricanes pair Stephen Madonia/Tatsuki Shimamoto was stopped with the duo leading 5-3.

“It just helps you to feel more confident,” Soriano Barrera said on winning the doubles point. “You know you have a point in the bag, and you don’t feel the pressure in having to come back from behind.”

Miami picked up where they left off when singles play began, beginning with the No. 1 match, where Soriano Barrera cruised to a 6-1, 6-0 victory over Charleston’s Johnny Wang in a match where the junior from Barcelona—ranked 63rd nationally—had little trouble, losing just a single game on his court and never being broken.

“I’m a very aggressive player, so when [Wang] started to feel the pressure, he kind of stepped back, so I stayed on top of him and the match was pretty easy,” Soriano Barrera said.

Dunlap and William Grattan-Smith were next to finish their respective bouts on the winning end, with their No. 2 and No. 5 matches clinching the team win for the Canes. Dunlap was on the upper hand of a 6-2, 6-2 win over the Cougars’ Ben Cawston, where the senior from Canada won each of the last five games in the second set. Meanwhile, Grattan-Smith recovered from a closer first set to pull away in the second, 6-3, 6-1.

Three singles matches were decided after UM cliched the overall victory, highlighted by Jankulovski’s 6-2, 6-3 triumph over Noah Borges, and Bastias’ win against Karl Mosterd decided by a super tiebreak, 4-6, 6-2, [10-4].

It was Shimamoto, a junior from Japan, in the No. 6 match and his 7-6, 6-4 victory over Easton Thomas clinched the sweep for Miami.

The Canes return to action at 1 p.m. on Sunday on home when they take on Liberty and Georgia Southern. Then the team will hit the road for the ITA Kickoff Weekend on Jan. 25-26 in Stanford, California.