Regular season kickoff might be eight months away, but the preparation begins now for the Miami Hurricanes football team. The Hurricanes signed 13 recruits from the class of 2020 last month, all of whom have enrolled for this spring semester. Spring enrollment at universities is a common practice of recruited high school players. The players will have a chance to get acclimated to the campus, classes and the football program before the season kicks into full swing next fall.

Running backs Don Chaney Jr. and Jaylan Knighton, both four-star recruits from South Florida, will be joining a relatively thin backfield following the departure of DeeJay Dallas, who is headed to the NFL, and former five-star Lorenzo Lingard, who has transferred to the University of Florida.

Worsham, from Trussville, Alabama, is perhaps Miami’s highest ranked recruited player. Worsham committed to Alabama in April of 2018, but decommitted in June of 2019 and announced his intent to play for the Hurricanes in November of 2019.

Redding III, another top recruit, had offers from Florida, Florida State, Notre Dame and Penn State, among other schools. Three-star tight end Dominic Mammarelli joins one of the most talented position groups on the 2020 roster and will face tough competition from Brevin Jordan, Will Mallory and Larry Hodges.

“To get Tyler is a big boost for the program. The running backs both have explosive potential,” Coach Manny Diaz commented. Concerning the receivers, Diaz added “I think that’s massive for us and the receivers, a guy like Daz Worsham, I think he can do some things and provide some things we have not had. Then you have Redding, who is a guy that is a playmaker on the outside while Restrepo’s got your short-area quickness, slot, return game, special team; the guy’s got a lot of value to the team.”

“We signed tackles, which are hard to find,” Diaz said. “On all three levels of the defense, we’ve continued to recruit the guys that have sort of made up the identity of our defense: speed, very explosive players, and guys that have a knack for making plays.”

One of Miami’s biggest weaknesses last season was the kicking game, so it came as no surprise that the coaching staff went after former FIU kicker Jose Borregales when he entered the transfer portal. As a graduate transfer, Borregales will have the opportunity to play one season with the Hurricanes. When FIU defeated Miami in November last season, Borregales made three field goals, from 29, 50 and 53 yards. The Miami native attended Booker T. Washington High School and is the older brother of kicker Andres Borregales, who is committed to play for Miami in 2021. 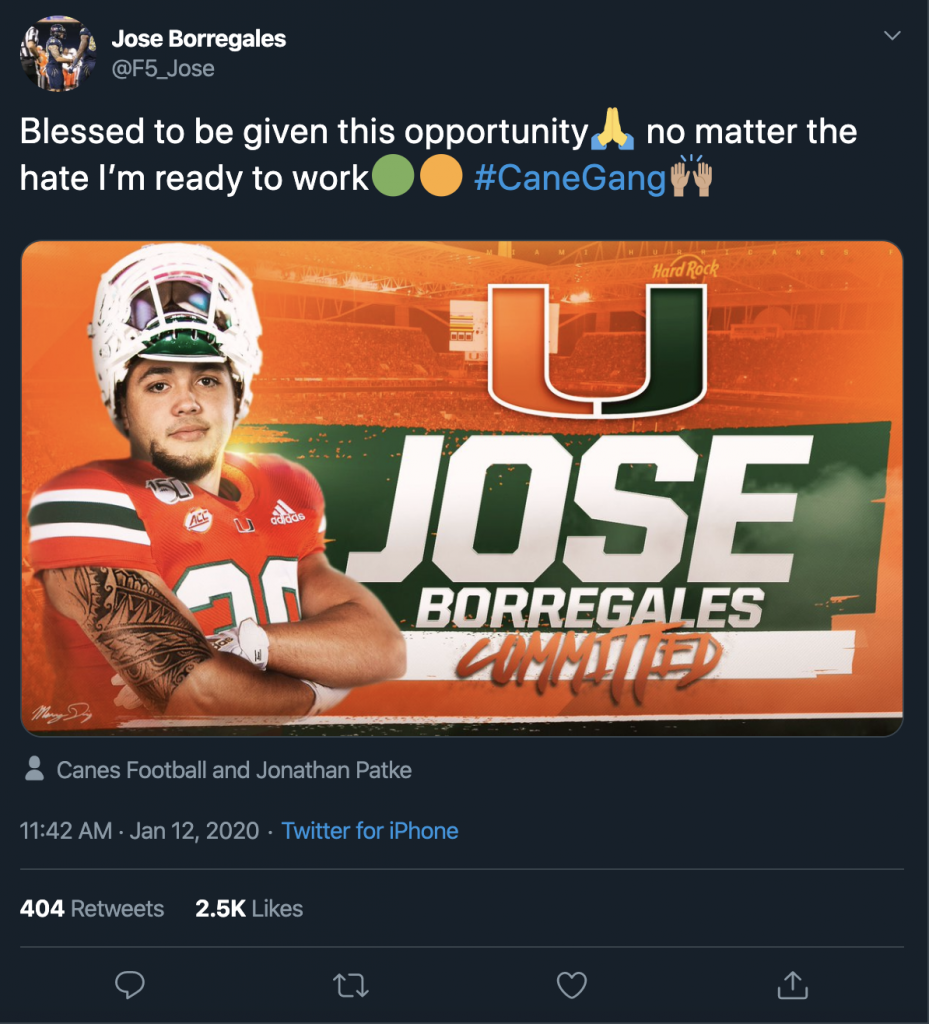 Borregales joins Camden Price, who went 6-7 on field goal attempts and Turner Davidson, who made 1-3 field goals attempts. Bubba Baxa, the original starting kicker from last season, struggled tremendously, going 5-10 on field goal attempts and 15-17 on extra points before being replaced by Davidson and then Price to end the year. Baxa is currently not listed on the 2020 roster and has reportedly entered the transfer portal, according to 247Sports.

A full list of the 13 recruits, including position and hometown, is as followed: