Home » Shorthanded No. 23 Hurricanes fall to No. 8 rival Florida State

Shorthanded No. 23 Hurricanes fall to No. 8 rival Florida State

Shortly before tipoff, it was evident that the Hurricanes matchup against No. 8 ranked Florida State was going to be a bit more difficult than expected. Redshirt senior Beatrice Mompremier was not available to play due to a foot injury and is listed as day-to-day. And her absence was felt as Miami (9-5, 1-2) fell 73-62 to in-state rival Florida State.

“In the Georgia Tech game, she got shut down,” head coach Katie Meier said about Mompremier, who is averaging a double-double. “It’s not anything career threatening by any stretch of the imagination. We are going to make sure that she is 100 percent and nothing’s more important than that.”

In the first quarter, Florida State’s ability to shoot at a higher percentage than the Hurricanes was the deciding factor. The Seminoles shot 53.9 percent from field goal range, while the Miami’s offense struggled, shooting only 36.4 percent. FSU closed out the first quarter with an 18-12 lead, a lead that they would maintain for the rest of the game. 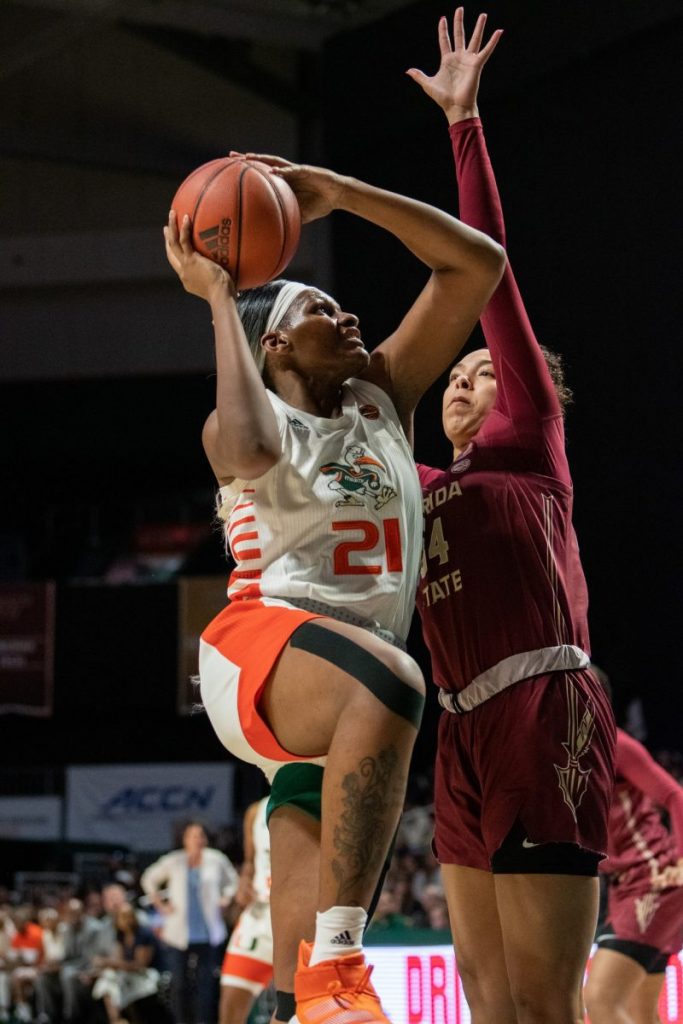 Brianna Jackson (21) played a much bigger role in the absence of Beatrice Mompremier and recorded the first double-double of her career. Photo credit: Jared Lennon

Freshman forward Brianna Jackson, getting a lot of playing time in place of Momepremier, had very big shoes to fill and made an impact in the middle. Jackson finished the game with 14 points and 10 rebounds, both career highs.

“Coach pulled me aside before the game and was like, we need more rebounds and more hustle,” Jackson said. “I just felt like I was playing team ball and the fact that I came out with a double-double is thanks to my teammates.”

In the second quarter, the Hurricanes came to play, but Florida State seemingly answered everything, led by forward Kiah Gillespie. Gillespie led all FSU scorers, with 13 points at halftime and 22 points at the end of the game.

“She’s a very, very big girl, very tough,” Jackson said. “Aside from practicing against Beatrice, I would say Gillespie is the next best that I’ve played against.”

The absence of Mompremier in the paint made it difficult for the Hurricanes to defend inside and it did not get any easier. Sophomore forward Jamir Huston left the game with 7:46 left in the second quarter after a very hard fall. Huston returned to the game after the half. Florida State finished the game with 20 points in the paint.

The Hurricanes cut the FSU lead to just one point, but Florida State stormed back on an 10-0 run late in the second quarter. The Seminoles took a 39-26 lead into the half. 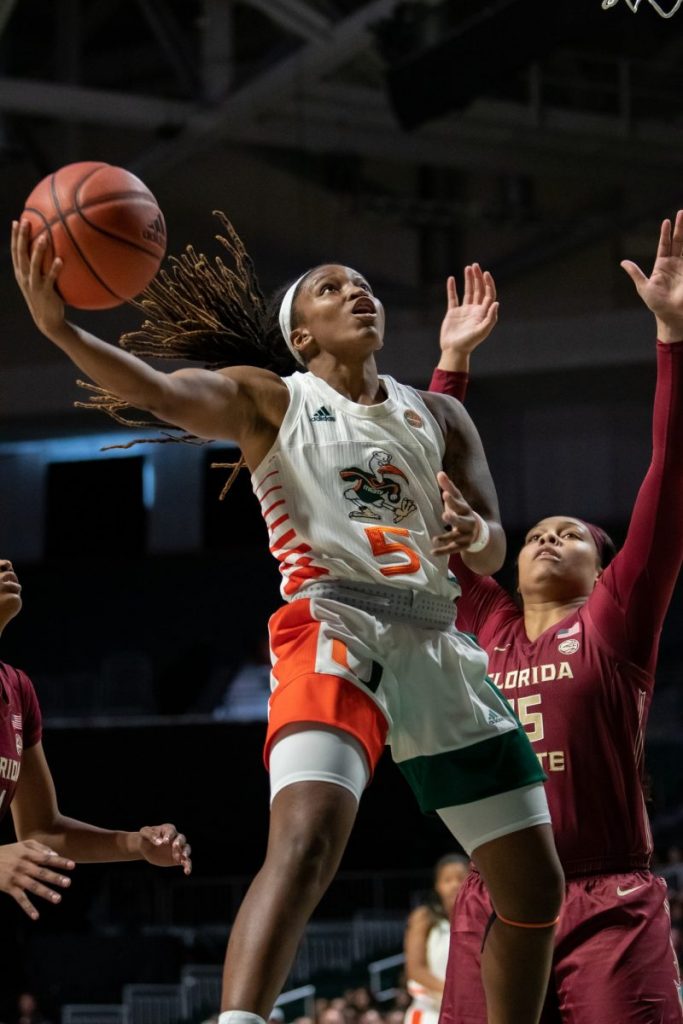 Miami fell down by as much as 18 in the third quarter but continued to battle. Miami cut the lead to just nine before a FSU called a timeout with 4:52 remaining in the third quarter to try and slow down the Hurricanes’ momentum. Every time Miami began to close the gap, Florida State came right back with a three. Mykea Gray led all Hurricanes with a season-high 21 points.

“I challenged Mykea Gray. She played every minute of the first half and was our leading scorer, but she was minus 16 at halftime and that’s not good enough,” Meier said.

In the end, the Hurricanes battled, but did not have enough firepower on offense to keep it close. Miami remains winless against top 25 teams this season, and is now 1-2 in ACC play.

Miami will now prepare to take on Louisville at 8 p.m on Jan. 9 at the Watsco Center.