For the first 15 minutes of the game, Miami looked every bit as elite as the Duke team they played against.

But turnovers, missed shots and poor defense ultimately led to the 95-62 loss Saturday night at the Watsco Center.

“Their defensive pressure on us not only forced turnovers, but their live ball turnovers that led to 23 points off turnovers. That’s a killer,” head coach Jim Larrañaga said after the game. “They are so quick to the offensive boards. They just beat us to the basketball.” 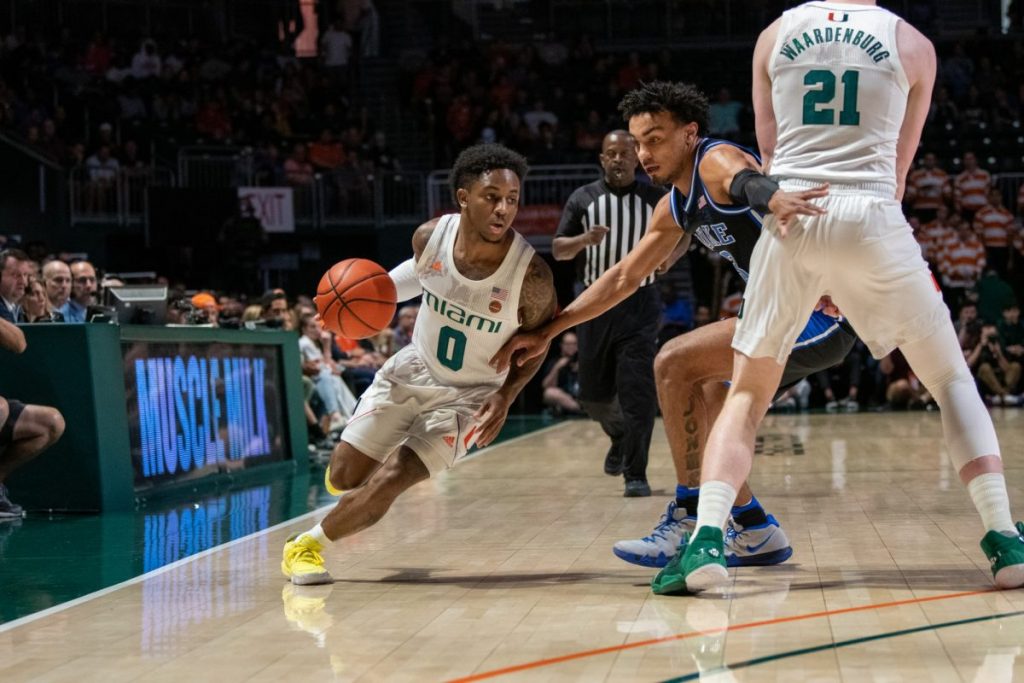 As a team, Miami shot 39 percent from field goal range and 16.7 percent from 3-point range. Miami did not make a single 3-point shot in the second half.

The Hurricanes lack of depth was also exposed. Duke had 11 players that rotated in, while Miami only had seven guys who played significant minutes.

“How do you prepare for a team like Duke when you just don’t even have personnel,” Larrañaga said. “Then when the game begins and they’re rotating 10 guys and we’re trying to keep our starting five or maybe our six guys on the court because those are our veterans and it gives us the best chance, and they did that for 10 or 15 minutes, but eventually they wear down.” 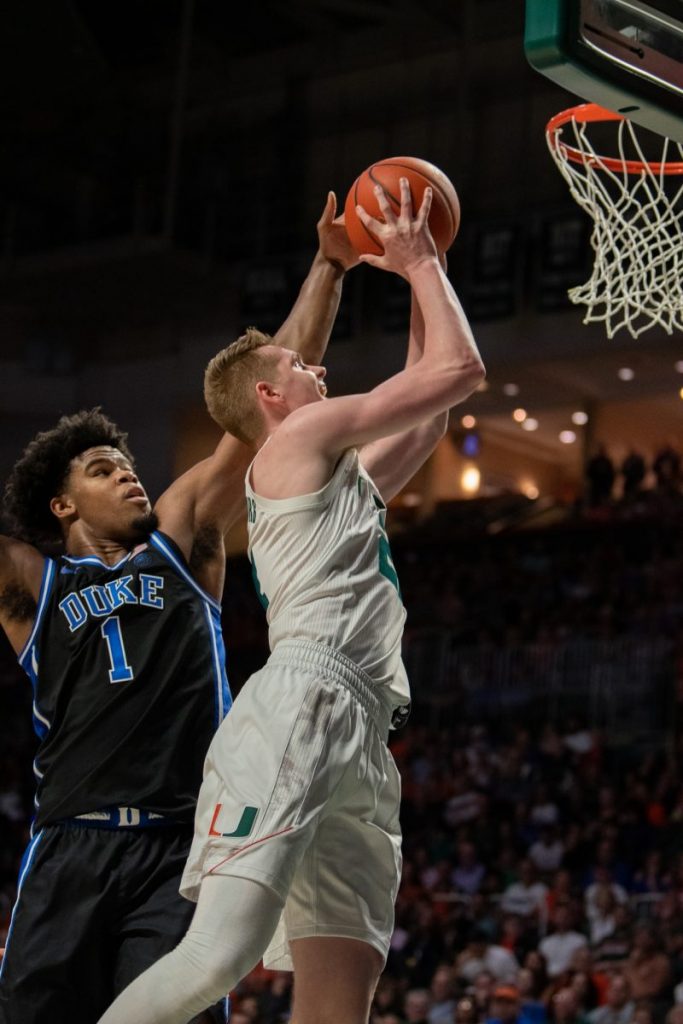 Sam Waardenburg (21) is guarded by Vernon Carey (1) as he goes up for a layup. Photo credit: Jared Lennon

Kameron McGusty and Sam Waardenburg provided most of the offense for the Canes. McGusty led the team with 12 points, but also contributed six turnovers to the teams overall total of 15 turnovers. Waardenburg played perhaps his best game of the season. The forward scored 11 points on 4-6 shooting from field goal range.

“They’re out pressuring guys so there’s a lot of lanes to the hoop, so I had that in my mind that I will be able to get to my right hand,” Waardenburg said. “That’s where I feel most comfortable.”

Defensively, Miami had no match for Vernon Carey Jr., a South Florida native, who had an outstanding performance in his return home. The 6’10 center scored 24 points on 11-14 shooting from field goal range, with nine rebounds.

After trading leads for about 10 minutes, Carey Jr. scored back-to-back layups, followed by a jump shot and a dunk to help put Duke up 40-31. Four quick points and a 3-point shot as the clock expired gave Duke a 50-36 lead heading into halftime, and from then on, it was evident that Miami did not have the skills or the effort to overpower the Blue Devils.

For every basket that Miami made, Duke had twice, sometimes three times as many. Miami only scored 26 points in the second half, while Duke registered 43.

A 3-point shot early in the second quarter from Jack White gave Duke a 20-point lead, which the Blue Devils extended to 30 with a little over three minutes to go after a Tre Jones layup.

“We can’t play at the pace they do,” Larrañaga said. “We can’t score 90 points the way they can, so it makes it very, very hard.”

Miami does not have a lot of time to prepare before they face Louisville for the second time this season, on Tuesday in Kentucky. The Hurricanes opened their season against Louisville and lost 87-74.

Miami men’s basketball welcomes No. 2 Duke for first game of 2020
Shorthanded No. 23 Hurricanes fall to No. 8 rival Florida State